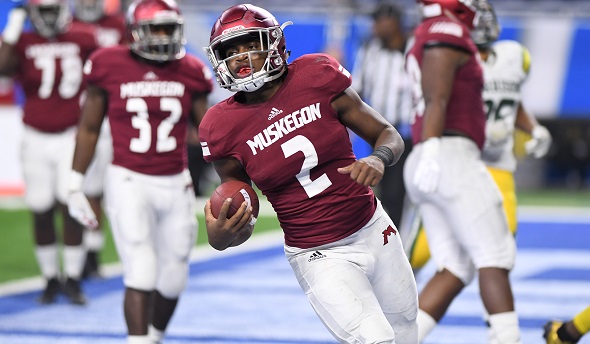 Muskegon’s 6-foot-2, 215-pound quarterback ran 32 times for 247 yards and four touchdowns to lead the Big Reds to a 28-10 win over Farmington Hills Harrison in Saturday’s Division 3 Final, earning Jefferson the Michigan Army National Guard “Performance of the Week.” The championship was Muskegon’s first since 2008 and came after the Big Reds fell by a point to Orchard Lake St. Mary’s in the 2016 championship game – when the Eaglets scored with four seconds to play.

Jefferson, who also celebrated his 18th birthday Saturday, finished this season with 2,097 yards and 33 touchdowns rushing and 1,205 yards and 21 touchdowns passing. His rushing touchdown total will make the MHSAA record book, and his performance Saturday earned four entries for accomplishments in a championship game. After splitting time at quarterback as a junior – and running for two touchdowns in the 2016 Final – Jefferson led arguably the best team in the state, regardless of division. The Big Reds scored 722 points, which rank third-most in state history, averaging 51.2 per game, which ranks 10th. Their average margin of victory was 45 points, and they outscored their five playoff opponents by a combined 221-36.

Individual awards are piling up for Jefferson, who was named Division 3-4 Player of the Year by The Associated Press and statewide Michigan High School Football Player of the Year by MLive. He previously had committed to continue his football and academic careers at University of Central Florida, but has re-opened his recruiting with Michigan State and Georgia Tech among those recruiting him hardest. Jefferson, who also ran track last spring, has big plans aside from football; he carries a 3.4 cumulative grade-point average and is a member of National Honor Society, and he plans to study aerospace engineering wherever he ends up.

Coach Shane Fairfield said: “He is just a selfless kid that loves to win, that loves family. He’s driven by the relationships in his home. And he loves his teammates. And he was more vocal and determined this week to get this win, because his biggest thing is he wants all the kids who aren’t going to have the chance to experience what he’s going to experience after he graduates to have some type of experience that they can say either, ‘Hey, I played with La’Darius’ or ‘I won a state championship when I was in high school.’ And that’s it – he’s very aware of how lucky and fortunate he is to be in the position he is, and he just wants to share that with all of his teammates.”

Performance Point: “It’s amazing. It’s something people dream of,” Jefferson said. “People dream about scoring the last touchdown in their backyard, making the final hoop. It’s a blessing. I’m trying to hold my tears in. We worked so hard to get here. We’ve been gassed and pounded. It’s so special. … This is the best thing that’s ever happened to me besides my family.”

Team of destiny: “It’s something these boys have been dreaming about. I kid you not; I told Eli Jackson, 44, our eighth grade year that we were going to win it. I mean, we’re here.”

Motivated Muskegon: “We had a chip on our shoulder until (the clock) was zero-zero. We weren’t done. We had a chip on our shoulder all year. Everybody we played, we said we’re going to punish. … Everybody doubted us. Everybody said we lost Kalil Pimpleton, one of the best players in the state (who played this fall at Virginia Tech). We lost JaCorey Sullivan (Central Michigan) … Andrew Ward (Nebraska), one of the best defensive players in the state last year. We lost them big boys up front. So we overcame.” 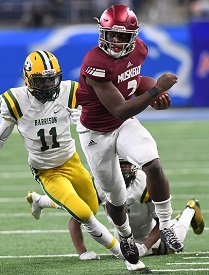 Checkmate: “I’ve been more humble (this season). I enjoy the moment. I feel like last year it was an amp moment; I wasn’t feeling it. I told myself, it’s all I’ve got. It’s my last job. I go through every day and I do a checklist. As a kid I dreamed about winning player of the year and breaking records and doing all this, and I did all that. The final checklist was win a state championship, and I can go home and check that off.”

Soaring on and off the field: “I know I want to be a successful young man beyond football. I want to go to college and study aerospace engineering, get my degree and help provide for my family. I’ve got goals beyond football. I thought as a kid that football was the only thing that I had, (but) I can do without football. I’m a great student. I work hard; I work my butt off in the classroom. I want to build planes. Who don’t want to build planes? Who don’t want to be like, ‘Oh, La’Darius built this big machine that’s flying?’ It’s cool; it’s unique.”

PHOTOS: (Top) La'Darius Jefferson crosses into the end zone for one of his four touchdowns during the Division 3 Final on Saturday at Ford Field. (Middle) Jefferson breaks into an opening while Harrison defenders pursue.