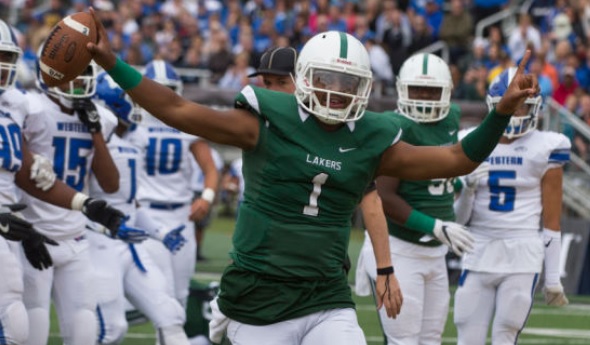 The Lakers’ quarterback led his team 80 yards over the final two minutes of Friday’s Regional Final against previously-undefeated Utica Eisenhower, completing 6 of 7 passes during the drive before running in the go-ahead score with 51 seconds to play as West Bloomfield clinched its first MHSAA Semifinal berth with a 28-25 win – clinching Veasley the Michigan Army National Guard “Performance of the Week.”

Total on Friday, Veasley connected on 23 of 37 passes for 319 yards and a touchdown and ran for two scores. This season he has completed 200 of 337 passes for 3,208 yards and 25 touchdowns, with only eight interceptions, and run for 455 yards (averaging 4.2 per carry) and 14 scores. Veasley is a two-year starter at West Bloomfield and also started as a sophomore on varsity as Southfield Lathrup in 2015 before that school closed the following spring. The Lakers went 6-5 a year ago, reaching the District Finals, but started 0-2 this fall before rattling off 10 straight wins to earn Saturday’s matchup with reigning Division 1 champion Detroit Cass Tech at Troy Athens High School.

The 6-foot-4, 230-pound Veasley called baseball his first love – he played first base and pitched last spring and said he throws 85 mph – but he is expecting to enroll early this winter at Bowling Green, where he’ll continue his football and academic careers. Veasley carries a 3.1 grade-point average and is considering studying business management, although he’s still solidifying his academic plans. For now, he has more high school history to help make; West Bloomfield also had never won a District football title before two weeks ago, but is aiming to finish this month with its first MHSAA Finals championship.

Coach Ron Bellamy said: “Bryce is one of the best leaders I have ever been around. What makes Veasley an exceptional leader is his ability to impact his teammates and coaches. He is very passionate about football, and making everyone step their game up a notch has been a strength of his. Veasley is a hard worker who challenges himself to be better every day. He is extremely coachable and usually doesn’t make the same mistake twice. Bryce is one of the main reasons why West Bloomfield has been able to make this amazing run.”

Performance Point: “It was just a great team win for us,” Veasley said of the Regional title victory. “It started off with the defense – they made a great stop on about the 10-yard line giving us the ball, and from there I knew I had to take it upon myself, with my O-line first, to get the ball into my receivers’ hands. … I live for that moment all the time. It was a great feeling. To be honest, every week we work on the 2-minute drill. I give it to the coaches; they prepare us well. We were prepared to go down the field and score.”

Making history, making memories: “We get recognized all the time, by the community, the alumni, the teachers and the students that go here. Everybody’s excited. … The memories, I think they will be just cherished, be just something I remember for my life. It’s more just the guys. We’re all going to keep in communication with each other. It will be memorable.”

Slow start: “We learned a lot (at 0-2). At first, it was just we knew we had to just finish games. That was one. And we just had to make sure when we come out we are ready to play. A lot of it was focus and competition.”

QB1: “I think it starts off with wanting to go out there and just win. That’s me. The other things (are) knowing coverages, knowing what defenses are trying to do, knowing what you’re trying to do as an offense to the defense, having a strong arm and being able to sometimes just know the matchups and be able to get the ball to your best player.”

Ford Field focus: “First off, it starts with preparation. I think the coaches are going to make sure (Saturday) is not just another game, but at the same time it is. We just have to come out and be ready to execute our gameplan and compete.”