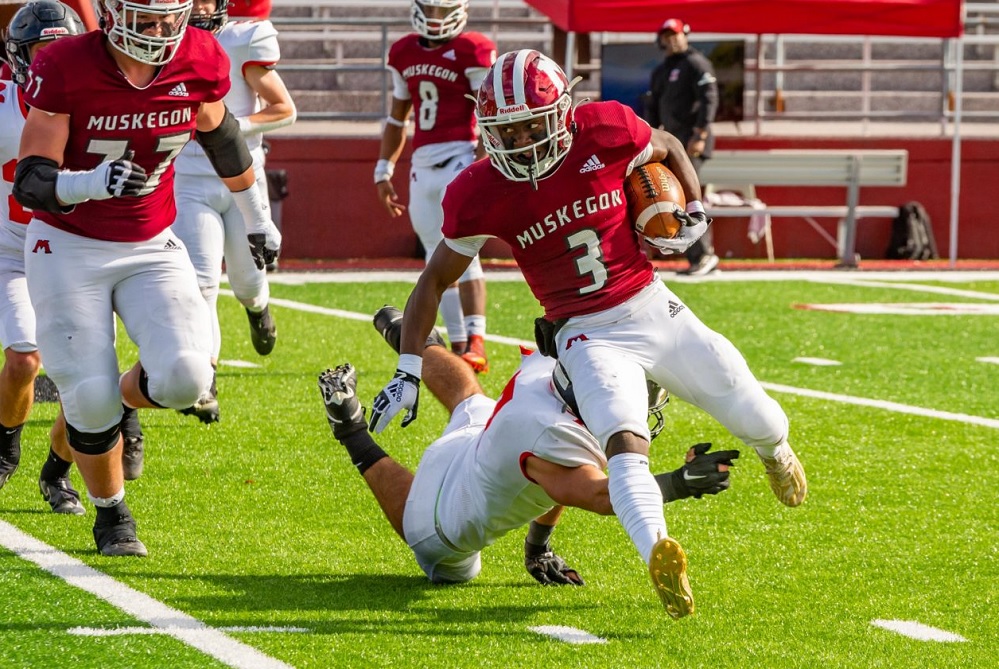 Watching Destin Piggee do his thing on the football field – drawing collective gasps from the crowd with an array of moves, bursts of amazing speed and dramatic stops and starts – is nothing short of pure joy.

What a contrast from the tragedy the quiet, humble, 15-year-old Muskegon High School sophomore suffered two months ago.

Muskegon coach Shane Fairfield said his young sensation has the heart of a lion, but that heart was ripped out of his chest on the afternoon of Sept. 3 – just hours before the Big Reds hosted Detroit Cass Tech in the biggest game in the state that weekend.

Piggee learned that his previously healthy father, 43-year-old Dereko Piggee, had died from complications after a short bout with COVID-19.

He then did what his dad would have wanted that night and played for the Big Reds, ripping off a 43-yard run (appropriately, one yard for every year of his dad’s life), giving a packed house at Hackley Stadium a preview of what was to come over the next eight games.

“My teammates and my coaches have helped me like you wouldn’t believe. If I didn’t have football, I probably would have gone out and done something stupid.”

The next game at Zeeland West was even more challenging, as earlier that day was his father’s funeral service – and then the young man who is too young to drive a car had to lay his father and best friend to rest at the cemetery.

He responded once again, scoring the winning touchdown on a 32-yard run in the fourth quarter.

Piggee hasn’t slowed down since, rolling up 705 rushing yards on a mere 30 carries, for a staggering 24 yards per attempt, with nine touchdowns. He also has caught nine passes for 201 yards and a touchdown, giving him 17 plays of 20-plus yards on only 39 offensive touches. 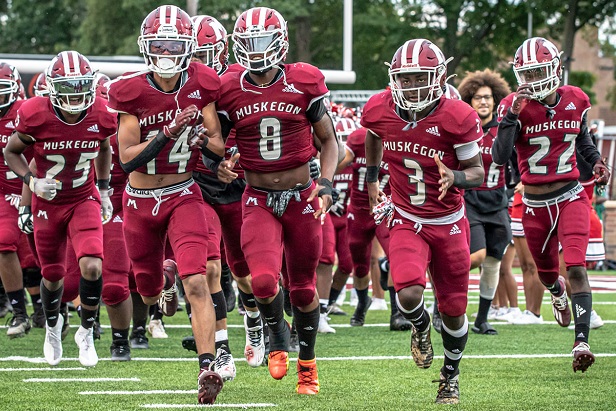 “He is a gifted natural athlete, but you should see the way this young man works,” said Muskegon coach Shane Fairfield, who has led his team to nine straight wins after the humbling Week 2 loss to Cass Tech. “His love for the game and for his teammates is contagious.”

Muskegon (9-1) hopes to win its 10th-straight District championship at 1 p.m. Saturday when it hosts Cedar Springs (8-2).

The Big Reds, who have also won five straight Regional titles, are aspiring to make it to Ford Field for the eighth time in the past 10 years. Muskegon has won a state-best 878 games and 18 state titles, including six in the playoff era, with the latest coming in 2017.

It has been the emergence of super sophomore “smurfs” Piggee and his good friend, running back Jakob Price (5-7, 165), which has keyed this team’s resurgence.

Exhibit A was Muskegon’s 49-28 win over crosstown rival and two-time reigning Division 2 champion Muskegon Mona Shores on Oct. 8. With the Sailors keying on senior quarterback Myles Walton, the sophomores stole the show – Price with six carries for 217 yards and TD runs of 70 yards and 99 yards and Piggee with six carries for 123 yards and two TDs, along with two catches for 71 yards and another score.

Against Wyoming earlier this year, Piggee touched the ball twice all game and scored touchdowns both times, on an 82-yard run and an electrifying 50-yard punt return.

Although he makes it look easy on the field, it’s been a daily, hourly, minute-by-minute battle off of it for Piggee and his family, especially his mother, stepmother, grandparents and siblings.

“One day after school, I just started crying and I couldn’t stop,” said Piggee, who is the youngest of his father’s five children.

That was when his Big Red family stepped in. 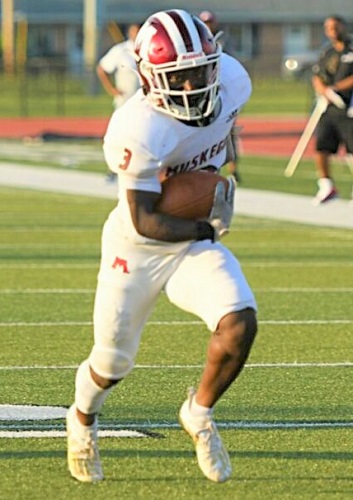 Senior Damari Foster hugged him and held him for a long time, before passing him off to freshman coach Corey Bibbs, who then handed him to Fairfield.

“Coach Fairfield finally got me to stop crying,” said Piggee, who wants to study electrical engineering in college. “He told me about some of the hard things he dealt with growing up, and I learned some things from him.”

Piggee said he draws motivation from his friend Dametrius “Meechie” Walker, a towering, 6-5 senior defensive lineman who was diagnosed last fall with osteosarcoma in his left leg, a rare bone cancer most often seen in teenage boys. The cancer has ended the playing career for Walker – who already had six Division I scholarship offers including from Michigan State, Minnesota and Kentucky – but he remains a positive, smiling force on the Muskegon sideline.

While Piggee is motivated to play hard for Walker, he is also determined to follow in the footsteps of his father, a 1996 grad who was a three-year varsity player and all-area defensive back for the Big Reds. He played running back, but was better known as a dangerous return man and lockdown cover man in the secondary.

“I remember Dereko was a nice, nice kid,” said Dave Taylor, Dereko’s head coach at Muskegon, who led the Big Reds to Class A championships in 1986 and 1989. “He did what I told him to do, and he was one of my favorites.”

This year’s Muskegon team is the youngest in Fairfield’s 12 years as head coach, with as many as eight freshmen and sophomores starting in some games.

The turning point in the season came after the 49-14 defeat at the hands of Cass Tech, when Fairfield challenged Piggee and his underclassmen teammates to rise above their youth and start playing “big boy football.”

“Big boy football means being confident and being in control of yourself at all times,” said Piggee. “We got on a group text and talked about that after our loss.

“We support our brothers here even when no one else does. These guys have helped me to get through every single day since my dad passed; you have no idea. I just want to go out and play as hard as I can for them.”

PHOTOS (Top) Muskegon’s Destin Piggee (3) eludes the grasp of a Lowell defender during the Big Reds’ District Semifinal win Saturday. (Middle) Piggee takes the field with his teammates before the Sept. 3 game against Detroit Cass Tech. (Below) Piggee makes his move upfield against East Kentwood. (Top and below photos courtesy of Local Sports Journal. Middle photo by Tim Reilly.)