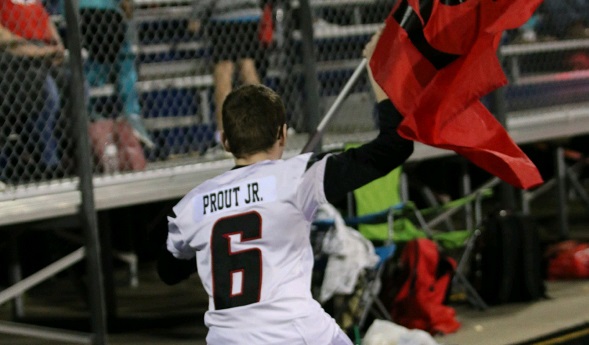 Or slightly less than one pound for each of the 105 surgeries he’s had in his young life.

He can’t play football — his body is much too fragile, despite a strong desire to play the game — but he makes his mark with the Pirates as an inspiration.

And the Pirates put a spark into a young man who has spent a large portion of his life in hospitals.

“Everyone gets pumped when he’s around,” Pirates senior quarterback Joe Bona says. “How could you not? Larry’s a great kid, an awesome, awesome character, and what he’s gone through should push us, because it’s way harder than what we’ve ever done. I think it pushes and makes us work harder.”

Larry is the sixth of six children of Kathy and Larry Prout Sr., who have made countless trips to emergency rooms when a medical emergency has cropped up in young Larry’s life.

At one point, their living room was a hospital room for Larry, complete with bed and medical equipment as the Prout family rallied around him.

He was born with no skin covering the lower half of his torso, leaving his internal organs exposed.

He spent most of the first 18 months of his life in the hospital, and didn’t breathe on his own until he was 3 years old.

“His first word was ‘lucky,’” Kathy Prout said in a 2016 interview. “It was the craziest word. It’s like a three-legged dog named Lucky, you know? That was his first word, and we would die laughing.”

He was included as much as he could be in his siblings’ hijinks, although he spent much of his time at C.S. Mott Children’s Hospital in Ann Arbor. But Larry Jr. became well-known among Wolverines fans during the 2016 season for the inspiration he was providing to the U-M football team, with Bleacher Report referring to him as the “heartbeat of Michigan football” in a 2017 report. 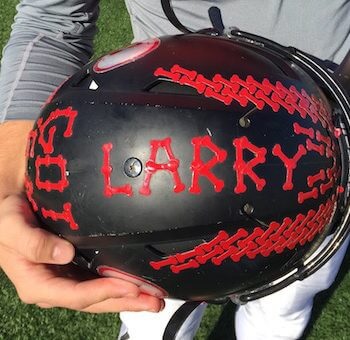 He’s making that level of impact on his favorite high school team now as well.

"Being part of Pinckney and Michigan means a lot," Larry Jr. said. "It’s been really fun, seeing the players and coaches; it’s the same as at Michigan. I love going to the games and sitting on the sidelines before kickoff, and seeing my players and my friends, my best friends, and seeing Coach Jim (Harbaugh) and Coach Rod (Beaton).

Larry is home-schooled because his body isn’t strong enough to allow him to attend school on a regular basis. He takes electives at Pinckney, including photography, and loves being at school, although his parents had to set some limits.

“We found out that every time we dropped him off at school, he would go out and find Rod (Beaton, Pinckney’s football coach),” Kathy said.

That may be, but Beaton returns Larry Jr.’s admiration.

“It goes without saying that he’s truly an inspiration,” Beaton says. “I’ve never met a young person with a more positive attitude than Larry. He really does bring it every single day, every time he’s here.”

Larry also has carried the flag during Pinckney's "No Quarter," the pause between the third and fourth quarters where a student picks up a black or red flag, depending on how the Pirates are faring, and runs back and forth in front of the bleachers to rev the Pirates crowd for the fourth quarter.

He practiced at home before carrying the flag in both of Pinckney's games so far this season.

His peers return the love, too.

Last spring, Larry Jr. planned to attend Pinckney’s prom, but had to miss it due to a hospitalization.

When Larry Jr. got out of the hospital, a classmate, Alex Williams, put on her prom dress and with some fellow students put on a prom for Larry.

“We have some outstanding kids here,” Beaton said, “and it goes to speak to what we have in this community. Our kids come from such great households, with parents who raise these kids the right way. They understand what Larry’s situation is, and it uplifts us all, every time he’s out here.”

The same, the Prouts say, goes for Larry.

“I remember I loved school,” Kathy said. “I loved it when my older kids were in school. You get the pencils and the pictures and the new clothes. With Larry, I have anxiety and stress because he wants to fit in and make friends and take six classes when he can only do two or three.”

Including Larry Jr. in activities like the prom and football means a lot to all of the Prouts.

“We have a lot of gratitude, and we don’t know how to show it enough,” Kathy said, ‘We want to show our gratitude to Rod and all of the players because they’ve made Larry feel important, such a part of this Pinckney football team. It’s something we’ll never forget, something Larry will never forget.” 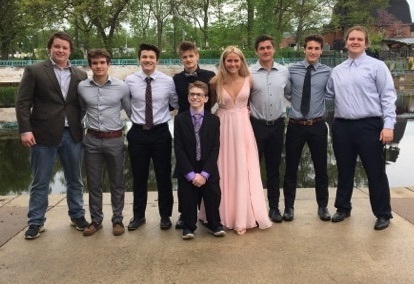 Larry Jr. was a part of the Michigan football team for three seasons, and among his close friends is reserve Buck West, a former Pinckney standout who often is seen at the Prout house watching game shows with Larry Jr.

“I love watching Family Feud and Steve Harvey,” Larry Jr. said. “(The Pirates) are like my brothers, just like Michigan was.”

Larry Jr. got connected to the Michigan team through an organization called Team Impact, which connects youths with life-threatening or chronic illnesses to college football teams.

Dan Kraft, the son of New England Patriots owner Robert Kraft, invited the Prouts to Ford Field when the Patriots played a preseason game there last month and got them passes to be on the field during pregame.

“As I was hanging out, the camera was filming me and they said Team Impact had a surprise for me,” Larry Jr. said. “And the craziest thing is, I see Tom Brady coming up and giving me a fist-bump and a high five. I shook his hand and told him I loved seeing him play. He pointed to my (Michigan) hat and told me to make sure to beat the Buckeyes this season. I told him I would make sure to do that.”

After Brady left, Larry Jr. jumped for joy, no mean feat for a young man who uses a wheelchair for anything but short walks.

“When he gets excited, he jumps,” Kathy said. “He can clear eight inches, which is pretty awesome, because they said he would never walk.”

At Pinckney practice, Larry Jr. hands out encouragement and banters with players who are, in many cases, a foot taller than him.

While he basks in the glow of being part of a team, he contributes to the Pirates something they might not have learned otherwise.

“The lesson I take is that it’s not as bad as what it’s going to be,” senior running back Sal Patierno said. “What we go through, you just think of what he’s gone through, and it makes you want to go harder. Just keep fighting. I know he’s fought harder than any of us.”

“He uplifts us all, every time he’s out here,” Beaton said.

PHOTOS: (Top) Larry Prout Jr. carries the Pinckney "No Quarter" flag in front of the crowd during the Pirates’ Week 2 game at Chelsea. (Middle) Then-senior Pirates quarterback Jack Wurzer spelled out Prout’s name on his helmet in 2017 from bones the players receive for outstanding efforts. (Below) Prout’s friends put on a prom for him after Prout, in purple shirt and tie, missed the school’s event this spring while hospitalized. (Photos courtesy of the Prout family and Tim Robinson.)