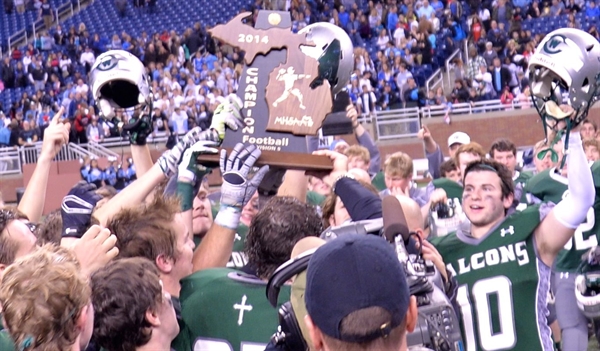 DETROIT – Travis Russell had faced this situation plenty over the last three years – first at the end of the 2012 Division 5 Final, then while lying in bed at night before games over the last two seasons.

As a sophomore quarterback that season, attempting to lead Grand Rapids West Catholic on a go-ahead drive in the fourth quarter, Russell was the listener – to his then-senior receivers and linemen offering encouragement – as the Falcons came up 12 yards short of overtaking Portland for an MHSAA title.

On Saturday, in the last of his three championship game appearances and final of 42 high school games, Russell entered the huddle as leader – encouraging teammates who stood 64 yards and three points from the school’s second straight title.

He told them, “This is what we live for, guys. We worked so hard all season for this moment. It’s going to pay off. Give everything you have, and it’s going to be fine.”

More than six minutes and 17 plays later, Russell ran three yards through the middle of Lansing Catholic’s defense to give West Catholic a 24-20 lead it would defend over the final minute to claim the school’s third MHSAA championship in five seasons and first perfect season since 1976.

“Definitely I lived it in the past; sometimes the night before games I’d think about it,” Russell said of the failed final possession in 2012, which stalled at Portland's 12-yard line as the Falcons lost 12-9. “Today, it wasn’t on my mind at all. Really, all I thought about was what can we do for each other right now to get it done.”

Russell ran for 134 yards and two touchdowns and threw for 203 and another score as the Falcons opened with a 17-0 lead, allowed the previously-undefeated Cougars to score 20 unanswered points, and then went back ahead late with Russell either running or throwing on all 17 plays of the final drive.

Lansing Catholic (13-1) completed a pass to its 32-yard line to begin its last-ditch possession to retake the lead, but senior Brett Wildman came down with an interception on the next play to effectively end the game.

Grand Rapids West Catholic (14-0) rarely trailed this season in outscoring its opponents on average 41-14. The Falcons fell behind last week early in its Semifinal against Menominee, also its opponent in the 2013 Final (a 27-14 win), but had never trailed in the fourth quarter this fall.

But after scoring on three of its first four possessions, West Catholic didn’t again for more than 24 minutes while Lansing Catholic scored on three of its next four after Russell’s 8-yard scoring run with 1:43 to go in the first half.

Cougars junior quarterback Tony Poljan – who also ran for a 7-yard score and threw a 41-yard touchdown pass to senior Zac Baker during the comeback – gave Lansing Catholic a 20-17 lead with a 22-yard scoring pass to junior running back Tony Palmer with 7:38 to play.

“We talk all the time (about) don’t get rattled, stay focused, teams are going to make plays,” West Catholic coach Dan Rohn said. “This is state championship football; you don’t get here with a bad football team. We had to make adjustments, they made some big plays and we were a little down on ourselves. But we stayed focused and made sure when we got the ball back that we chipped away a little bit. 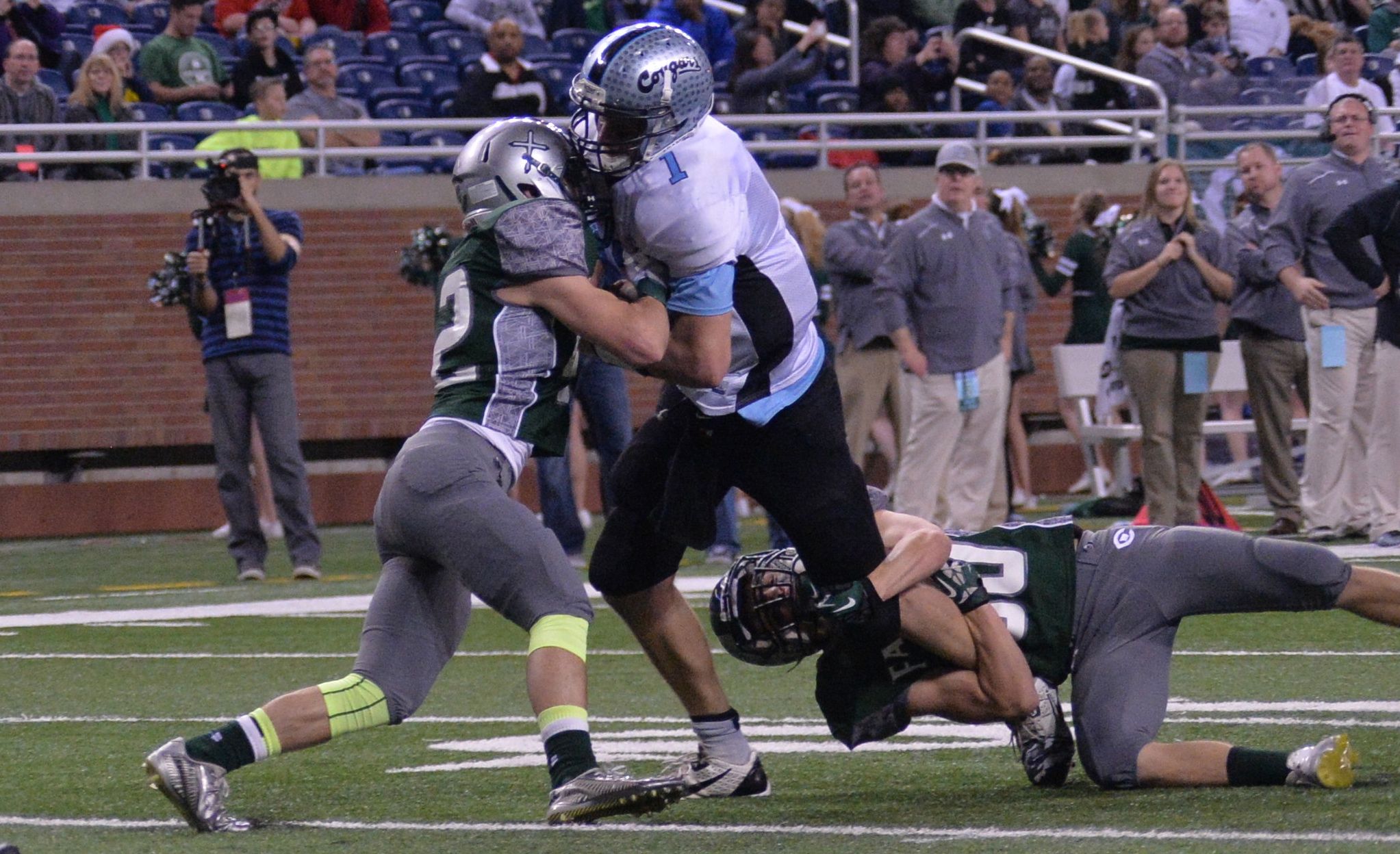 “We have 24 seniors, and we need those kids to stay focused and play like leaders down the stretch. You don’t get to this level without those kind of kids and that kind of effort.”

That’s something Lansing Catholic has known as well in making the Finals twice over the last four seasons. In 2011, the Cougars were led by another sizable quarterback in Cooper Rush (now starting at Central Michigan University) but fell to Flint Powers Catholic 56-26 in that championship game. The 6-foot-7, 230-pound Poljan had never played quarterback before last season; he finished the Final with 60 yards rushing and a touchdown and 269 passing with two scores – giving him 2,806 yards and 34 touchdowns passing and 1,013 yards and 23 touchdowns rushing for the season.

“(He’s a) tremendous athlete that’s worked really hard to get where he’s at,” Lansing Catholic coach Jim Ahern said. “When we had to get some yards today, he got yards. He threw the ball well.

“I’m real proud of him. He’s worked for everything he’s got.”

Palmer was Poljan’s main target, catching eight passes, while senior lineman Ian Gorgenson paced the Cougars’ defense with 13 tackles. Senior running back Nick Buursma also ran for a score for West Catholic, and senior Charlie O’Connor had 111 receiving yards and caught the lone scoring toss from Russell. Wildman had a team-high 10 tackles and a sack in addition to his rally-stopping interception.

Lansing Catholic hadn’t scored fewer than 21 points since opening night 2013 and hadn’t given up more than 22 since West Catholic put up 38 on the Cougars in last season’s District Final. Ahern believed the teams were similar – similar offensive styles, standout quarterbacks who can run and pass. But Lansing Catholic just couldn’t stop what it knew was coming in crunch time.

“It just shows the growth and resilience of this team. We’ve been in every situation that is possible, and it’s just a credit to the guys,” Russell said. “Being able to fight, to dig deep and find something that Coach can’t really tell us to have. You can’t teach the will power guys had at practice, that was able to help us get it done today.”

COUGARS BACK IN THE GAME - Late in the third quarter, Lansing Catholic tightened things up with a 96-yard drive, capped by a 41-yard pass from Tony Poljan to Zac Baker.

This week on STATE CHAMPS! Extra Point: Sydney Cariel and Devin Gardner recap the notable games from Week 5 and preview the marquee games going into Week 6.