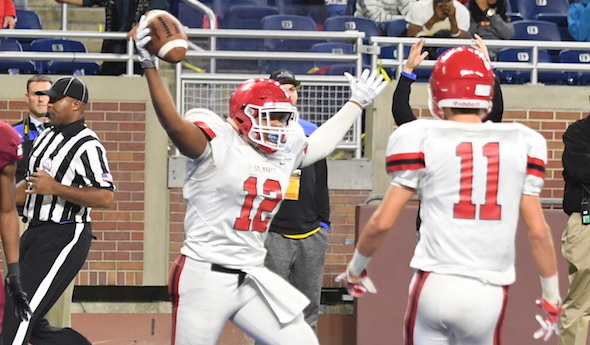 DETROIT – Orchard Lake St. Mary’s has been bitten before by teams that made last-second winning plays.

This time St. Mary’s bit back.

Ky’ren Cunningham’s 18-yard touchdown reception with four seconds left gave the Eaglets a thrilling 29-28 victory over Muskegon in the Division 3 Final on Saturday at Ford Field.

St. Mary’s (10-4) began its last drive on its 20-yard line with 1:55 left. A pass interference penalty by Muskegon and Rashawn Allen’s 22-yard run placed the Eaglets in a good position to go for the winning score.

On 3rd-and-3 from the 22, quarterback Caden Prieskorn scrambled for four yards and a first down. An incomplete pass preceded the winning score.

“It was a pistol right,” Prieskorn said. “All we knew was we were going to have man-on-man coverage.”

Make no mistake. This was desperation, and it was a makeshift play. Cunningham is a starting running back. The last time he lined up as a receiver was in the first game this season against Macomb Dakota. Coach George Porritt ditched that plan afterward. Cunningham would stay in the backfield.

But not this time. St. Mary’s had five wideouts and to confuse matters more, Cunningham went to the slot, then switched spots with Clay Antishin, with Antishin moving inside.

“I play running back,” said Cunningham, a junior. “It was one-on-one and the safety didn’t come over the top. Caden just threw it. He just made the read.

“My body felt so weak (when I caught it). I don’t remember much.”

If Cunningham was stunned, Muskegon was more so.

The only loss the Big Reds (12-2) had this season was to a team from Illinois (Lincolnshire Stevenson). They rolled through the playoffs with their Semifinal game against Edwardsburg (19-8) the only close one.

“People say we can’t win the big one," he added. "We won a lot of big games to get here. The football game doesn’t define you. It’s what you do and the way you act afterwards that defines you.”

It was Muskegon’s fourth loss in a Final since winning its last title in 2008. Meanwhile, the championship was St. Mary’s third straight and eighth overall. 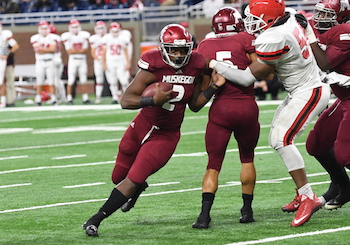 Muskegon took a 21-20 lead on its second possession of the second half. It took the Big Reds 1:48 to go 50 yards with senior quarterback/running back Kalil Pimpleton going the final 18 to give Muskegon the lead with 11:21 remaining.

St. Mary’s then went on one of its patented long, time-consuming drives to retake the lead. The Eaglets took 12 plays to go 47 yards, and Ben Fee set an MHSAA Finals record with a 49-yard field goal to give his team a short-lived 23-21 lead with 4:47 left.

Clinton Jefferson, Jr., returned the ensuing kickoff 49 yards to midfield to give the Big Reds great field position, and they made it count. Jefferson carried five times on the drive for 32 yards, including the last three for a touchdown with 1:55 left.

As it turned out, that was too much time to leave for St. Mary’s.

“Cade made some big throws against DeWitt (in a Regional Final),” St. Mary’s coach George Porritt said. “What amazes me is we were 5-4 at one point, and we battled back.”

St. Mary’s is the fifth team to win an MHSAA football title having lost four games.

Muskegon led 14-13 at the end of an entertaining first half.

The Big Reds went 70 yards during the opening drive and took a 7-0 lead on Pimpleton’s 18-yard touchdown run. Pimpleton’s 27-yard pass to Jefferson helped set up the score.

St. Mary’s then went 69 yards, but its drive stalled and Fee kicked a 32-yard field goal.

La’darius Jefferson took over at quarterback for Pimpleton in the second quarter, and Muskegon increased its lead to 14-3 as Jefferson completed an 80-yard drive with a 2-yard touchdown run. He carried five times on the drive for 25 yards. His 54-yard pass to Pimpleton was the key play.

After another Fee field goal, Muskegon had possession late in the half. But on 3rd-and-9 Jefferson handed off to Pimpleton, who threw a halfback pass that was intercepted by Shermond Dabney, who returned it 30 yards to the Muskegon 30. On St. Mary’s 3rd-and-9, Prieskorn threw a 29-yard touchdown pass to Antishin, who made a diving catch in the end zone with 35 seconds left before the break.

Allen was a workhorse in the backfield, and ran with determination. A junior, he rushed for 136 yards on 25 carries, and Cunningham had 15 carries for 46 yards. Prieskorn was 13 of 21 passing for 200 yards and two touchdowns.

For Muskegon, Pimpleton had three receptions for 88 yards, was 3 of 4 passing for 58 and rushed nine times for 56 yards and two touchdowns.