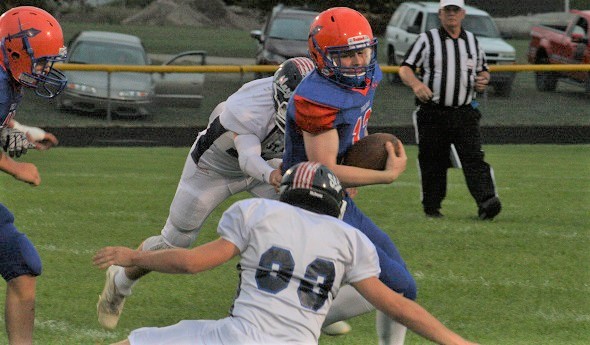 Schultz, a starting linebacker and running back in his third year with the Trojans, had the beginning of his final year on the gridiron delayed until the third week of the 2019 campaign — the game that paid homage to those who have served in the military — as he was completing basic training for the National Guard.

Enlisting in the Split Training Option program gave Schultz the opportunity to do basic training during the summer before his senior year. He reported to Fort Sill in Oklahoma on June 25 and spent the next 10 weeks going through the rigors of the military. It’s part of an eight-year contract with the National Guard that includes six years of active service, followed by two more years of inactive duty.

“It just gave me a head start, instead of graduating and then doing basic,” said Schultz. “The advantage of doing split op is I can come back and finish high school and take a little break, then go back down.”

Schultz quickly found out how demanding the military can be for a new recruit during basic training.

“They give you near-impossible tasks and if you can’t do them, you do push-ups or exercises,” he said. “Sometimes you’d have to go upstairs and change into a new uniform in less than 30 seconds. If you can’t do that, you’re coming downstairs and doing push-ups.”

To make matters even more challenging, the 240-member unit did the brunt of their training in the heat of the southern Oklahoma summer, where temperatures often reached into triple digits.

“They said it was one of the hottest summers there in a long time,” said Schultz. “We had to wear Kevlar helmet, bulletproof vest. They added 30 pounds to us. We were out there in the heat. It was just insane. We didn’t have (air conditioning). What we had were these big fans that sprayed mists of water. They were big, powerful fans, but unless you were really close to them they didn’t work very well.”

Not only did Schultz manage to make it through those hardships that he faced during basic training, but he came out of graduation with high praise from his drill sergeant. 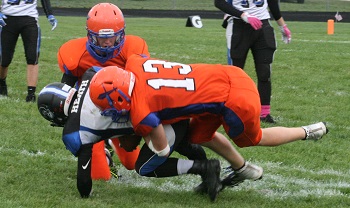 “His drill sergeant had nothing but good things to say about him,” said Schultz’s mother, Mary Drenth, also a veteran of the National Guard. “He did great on everything. He was one of six in the whole unit to shoot expert on the rifle range. He was second. There was one kid who got 38 out of 40, and he got 37 out of 40. We’re incredibly proud.

“We have four boys. When we found out he was graduating a week into school, we chose to let the kids all miss that first week of school and took a trip out to Oklahoma. So, they all got to witness their brother graduate. That was an amazing experience. It was really, really cool.”

Like his first experience in the military, Schultz also can hold his own on the football field, where he has been a fixture at linebacker since taking over a starting spot as a sophomore in 2017 — the year the Trojans went 13-0 and captured the MHSAA 8-player Division 1 championship. It was his first season playing football after moving from Cheboygan the previous year.

“It was funny because I was thinking of doing football in Cheboygan and I never really committed to it because I was hockey, hockey, hockey. I love hockey,” said Schultz, who started playing hockey as a 4-year-old. “Then I came here and thought, ‘I’ll give football a try. Might as well.’ I love those guys. It was just so fun. Everyone was so confident. Going into a game we didn’t expect to lose. We were just going out there and having fun.”

Central Lake/Ellsworth defensive assistant coach Jarod Steenwyk has come to rely on Schultz’s toughness and tenacity at the heart of the Trojans’ defense for the past couple years, so he was excited to finally have Schultz return from basic training. Schultz also is getting an increased role at running back this season after serving as a backup at that position the last two years.

“He brings some size at linebacker for us and having that other running back,” said Steenwyk. “He’s got some speed, but he’s willing to hit somebody — lower the shoulder.”

“He started for us on the state championship team and even in that (championship game) he made some pretty big plays. He really came through for us.”

Steenwyk has noticed that Schultz seems to be more focused in the short time he’s been back with the team. Drenth, likewise, said the experience of basic training changed her son in a good way.

“It was good for him,” she said. “He’s definitely matured a lot. He has the self-discipline. He’s a different kid now.”

After Schultz finishes the school year in the spring, he will return to the National Guard for Advanced Individual Training — eight weeks of hands-on instruction at Fort Leavenworth in Kansas with a Military Occupational Specialty as a construction equipment repairman.

“Right after high school I’ll go to AIT, finish up there and then come back with some good certificates that will get me a head start, and it will look good on my resume,” said Schultz. “So far I’m not regretting anything.”