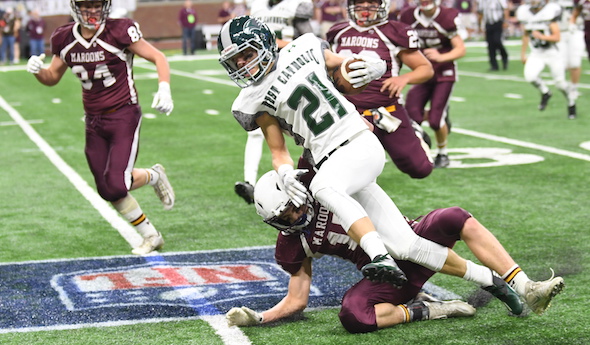 DETROIT – November has become a regular part of the Grand Rapids West Catholic football schedule. Trips to Detroit are turning into a Thanksgiving weekend tradition.

But what the Falcons accomplished again Saturday was not lost on them.

“There’s no word to describe it. Year after year, competing like that, getting to play 14 games – we’re very, very lucky and blessed,” said senior Sam Neville, who with David Fox played on all four champions. “That’s double what most people get to play over the course of their high school careers.”

This string was as impressive as any of the other three, for a few reasons.

West Catholic finished 12-2, despite playing without junior quarterback Gaetano Vallone for six weeks after he injured an elbow on opening night.

The Falcons, with a Week 3 loss to Zeeland West and a Week 9 defeat to Allendale, were then forced to play all of their playoff games on the road. They navigated a path highlighted by previously undefeated Portland, handed second losses to Lansing Catholic and Algonac and also beat another league champion in Berrien Springs.

They did so under the leadership of a new coach. Joe Hyland was hired this spring after the resignation of Dan Rohn, who had led the team to the first three titles of this streak. Hyland had been highly successful coaching in South Carolina before coming to West Catholic as a teacher and guidance counselor in fall 2015, but as with any change, there was a transition.

And then there was that Finals familiarity. The Falcons defeated the Maroons in 2013’s Division 5 Final to start this streak, and also in a Semifinal in 2014 and Regional Final last fall. It would be hard to find two high school programs 450 drive miles apart that know each other more.

“There’s a lot of people in our community and even statewide who talked about ‘November, November,’ but our discussions were always about today,” Hyland said. “And just feeling like if you do the right thing now, the rest will work out. And if we get beat by a good team on our best day, then you shake their hand and look them in the eye and congratulate them. But we really felt like on our best day, that wasn’t going to happen.”

Saturday had to be one of them.

Junior kicker Liam Putz started the scoring just 2:41 into the game with an MHSAA Finals-record 47-yard field goal, a yard longer that Josh Wuerful’s for Traverse City High against Detroit Catholic Central in the 1988 Class A championship game.

By the end of the first quarter, Vallone had thrown two touchdown passes. By halftime, he’d connected on four. The first, a 91-yarder to senior Brett Myers, was the fourth longest pass play in Finals history.

Vallone finished 13 of 20 passing for 311 yards, the fifth most in Finals history. He spread the ball nicely with five receivers catching at least one pass; Neville had six catches for 117 yards and two scores, Meyers three for 143 yards and his long touchdown and senior Aaron Hall caught four balls for 66 yards and the other passing TD.

Menominee did achieve a little history as well. In addition to playing in their fifth Final, the Maroons scored their points on a 76-yard blocked field goal return by senior Hunter Hass – the first blocked field goal return touchdown in Finals history. The kick was blocked by senior Sam Larson, and Hass picked up the loose ball and ran down the left sideline for the score.

“All week we were practicing to block their punt, and it just so happened that we blocked their field goal,” Hass said. “I saw the ball. I just picked it up and ran into the end zone, just trying to get some points to get some momentum going for our team.”

But the rest of the afternoon was a struggle. The Maroons (12-2) gained only 163 yards and tied a Finals record held by two others teams with seven turnovers – three coming on fumbles.

They also played once more without all-state tailback Keifer Rasner, who missed the end of the season with an injury.

“When you turn the ball over that many times to a good team, you don’t have much of a shot,” Menominee coach Joe Noha said. “But I’m really proud of my guys. We really hung in there. We’ve had a lot of things happen in the last couple of weeks, but I’m really pleased with our effort and our fortitude to get here. And once you get here, finishing is difficult. Today was not our day.”