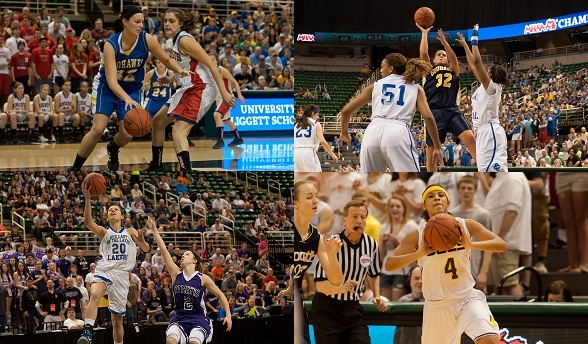 Mathematically speaking, the 2010 MHSAA Girls Basketball Finals were just a bit closer than this season’s, with a combined point differential of 28 over the four championship games.

But it's a decent argument to call this winter’s Finals the most highly-contested set, as a whole, since the late 1990s.

In three of the four championship games, the eventual winner didn’t take its last lead until the final five minutes of the fourth quarter. Two Finals came down to the final two minutes. Class A was decided by a fastbreak lay-up with six seconds to play.

Combine those with a pair of three-point Class A Semifinals and appearances by the reigning champions in all four classes, and it made for a highlight-filled weekend at Michigan State’s Breslin Center.

Here’s our wrap-up of some of the most memorable moments:

Much to overcome: First Grand Haven had to get past reigning Class A champion Inkster in a Semifinal, and did so 43-40. Then the Buccaneers were told in the locker room that a group of their classmates had been involved in a crash on the way to the game and hospitalized. Then Grand Haven found itself down 18 points in the Class A Final – and completed the third-largest comeback in MHSAA Girls Finals history in downing Grosse Pointe South 54-53 to win the Bucs’ first championship. Senior guard Shar’Rae Davis might’ve had the play of the weekend, a baseline to baseline drive and lay-in for the deciding points with six seconds remaining. (Read the full report.)

It’s our turn: Goodrich is a team many in the girls basketball community saw coming for a while. After being stopped by a number of state powerhouses over the years, the Martians solidified their status among them by advancing to their first MHSAA Final and beating Grand Rapids Catholic Central 60-53 in Class B. Goodrich trailed by five with 5:32 to play, but finished on a 9-2 run and ended the season a flawless 28-0. It was the Cougars' their third championship game appearance in four seasons. (Read the full report.)

Champions again: Morley-Stanwood’s Class C title was its first in girls basketball, but second for the school’s girls teams this school year after the Mohawks also won the Class C volleyball title. Two stars from that latter team came up big in these Finals as well – Bailey Cairnduff scored 28 points as Morley-Stanwood beat reigning champion St. Ignace 60-50 in the Semifinal, and Alexis Huntey had 27 points and 16 rebounds in the 61-57 championship game win over Grosse Pointe Woods University Liggett. The Mohawks had to outlast the Knights and Miss Basketball winner Madison Ristovski, whose 42 points were the second-most in MHSAA girls championship game history. (Read the full report.)

No D-nying Lakers: Waterford Our Lady of the Lakes won its third-straight Class D championship with a 53-47 win over Athens on the strength of five players scoring between seven and 13 points. Senior Ava Doetsch and juniors Lexie Robak and Jessica Parry were members of all three championship teams. Athens, meanwhile, made its first title game appearance. (Read the full report.)

16,897: Total attendance for the 12 Semifinals and Finals, combined. Keyed in part by a giant Grand Haven student section, the biggest crowd attended the Class D and A Finals session Saturday morning – although Class B drew the most fans among the Semifinal sessions.

56: Percent of its shots from the floor made by Waterford Our Lady in the Class D Final. The Lakers’ five starters took all but one of the team’s 34 shots, and all five hit at least 50 percent of their attempts from the field – including 6 of 12 from 3-point range.

18: The number of points by which Grand Haven trailed Grosse Pointe South with 1:51 to play in the third quarter of the Class A Final. Only Farmington Our Lady of Mercy in 1982 (19 points) and Detroit Cass Tech in 1987 (20) made bigger championship game comebacks in winning titles.

42: Total points scored in the Class C Final by University Liggett’s Ristovski, on 15 for 29 shooting from the floor including 4 for 8 from 3-point range. Only Peggy Evans for Detroit Country Day in 1989, with 47 points, scored more in a girls championship game.

99: The number of wins over four-year varsity careers for Grand Rapids Catholic Central seniors Shellis Hampton and Tiesha Stokes, after their Semifinal victory, which tied them with two others for second-most in MHSAA girls basketball history.

“It was a pretty emotional day (Friday), a lot of tears and a lot of crying. We tried to keep the kids focused on what we could control. I was exhausted, and I wasn’t even playing. I just think waiting for that Class D game to get done; it’s just a long two-day period here. But the kids, we were playing for them. The girls really wanted to do it for them and for this community, but more so for those kids that would not be able to be here.” – Grand Haven coach Katie Kowalczyk-Fulmer, on her team coming back strong in Saturday's Final after hearing about the Friday crash

“Our theme this year was ‘stay hungry.’ Two years ago we in the Quarterfinals, last year the Semifinals, and we knew we were a good team. We didn’t want to be in a situation where we expected to be here. We wanted to make sure we were still putting forth the effort. We have a lot of talent, maybe the most talent in the entire state right now. But we didn’t want to use that as the only thing that guided us all year.” – Goodrich coach Jason Gray

“I knew they were three special players at that young age, and I truly in my heart believed we could get down here. I told them all year, we don’t want to just get down there and get bounced out. We want to come down there and win it. And these three had a lot to do with that, obviously.” – Morley-Stanwood coach Bob Raven, on seniors Cairnduff, Huntey and Elyse Starck

“Throughout the year, we each had moments where we could be the last player to have the ball in our hands, who wanted it, and that’s what we needed.” – Waterford Our Lady junior Lexie Robak.

Freeland: Although the Falcons fell 72-49 to Grand Rapids Catholic Central in their Class B Semifinal, it could end up as just another catalyst for a team that graduates no one this spring. Guard Tori Jankoska will sign with Michigan State this fall, and she’s got one more season after scoring 29 points in this trip to Breslin.

Concord: The Yellow Jackets will begin next season with four starters back from this Class C Semifinalist team, and without only three seniors who graduate this spring. Junior guard Megan Redman earned all-state recognition this season in helping Concord to a 26-1 record despite playing in a league that also included Class D Semifinalist Athens. Total, the Yellow Jackets had eight juniors who should contribute again in 2012-13.

Crystal Falls Forest Park: Four starters graduate from the team that made it to Breslin. But sophomore Alexis Gussert is only a sophomore, and could be the next elite player to emerge from the Upper Peninsula – her 34 points and 12 rebounds in the Semifinal loss gave a strong first impression. All four players Forest Park brought off the bench should be back next season as well.

To watch all 12 games and press conferences after each, click on MHSAA.tv.