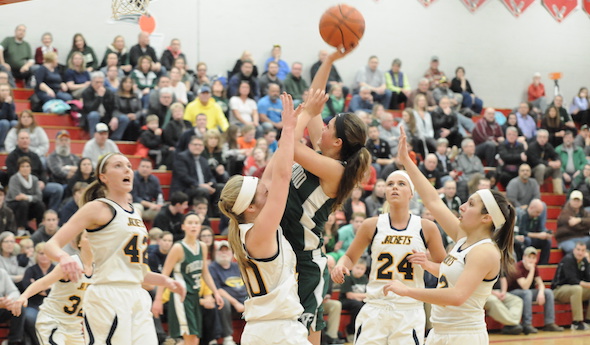 Three 2016 MHSAA champions will take the floor for Friday’s Semifinals in Classes A and B.

Warren Cousino is back attempting to repeat in Class A, and Marshall is seeking to do the same in Class B. The third guarantees there will be a new Class C champion this weekend; Ypsilanti Arbor Prep won that title last year but is in Class B and earned the top ranking during the regular season.

All four Class A and B Semifinals will be played Friday, with all four championship games Saturday.

Tickets cost $8 per pair of Semifinals and $10 per two-game Finals session. All Semifinals will be streamed live on MHSAA.tv on a pay-per-view basis. All four Finals will be broadcast live on Fox Sports Detroit, the Class D, A and C Finals on the network’s PLUS channel and Class B on the primary channel. Free radio broadcasts of all weekend games will be available on MHSAANetwork.com.

And now, a look at the semifinalists in Class A and Class B. Click on the name of the school to see that team’s full schedule and results from this season. (Statistics are through teams' Regional Finals, except Freeland’s are through the end of the regular season.) The Girls Basketball Finals are presented by Sparrow Health System.

SOUTHFIELD ARTS & TECHNOLOGY
Record/rank: 22-4, No. 6
League finish: First in Oakland Activities Association Red
Coach: Michele Marshall, 22nd season (276-92)
Championship history: First season as a program.
Best wins: 55-51 over No. 1 Detroit Martin Luther King in the Regional Final, 68-52 over Detroit Renaissance in the District Final, 52-38 over Ann Arbor Huron in the Quarterfinal.
Players to watch: Deja Church, 5-10 sr. G (20.1 ppg, 8.5 rpg); Alexis Johnson, 5-10 soph. F (14.8 ppg, 7.0 rpg).
Outlook: Although Southfield A&T technically is a new program, Marshall formerly built Southfield Lathrup into a top program before that school and the former Southfield High merged last fall. Lathrup won the Class A title in 2005. Church was a Miss Basketball finalist and will continue at University of Michigan. Freshman guard Cheyenne McEvans adds another 10.3 points and six rebounds per game and with Church is among three who had at least 22 3-pointers this season entering the week.

DETROIT COUNTRY DAY
Record/rank: 24-1, No. 2
League finish: Does not play in a league.
Coach: Frank Orlando, 36th season (757-113)
Championship history: Eleven MHSAA titles (most recent 2015), four runner-up finishes.
Best wins: 55-46 over Class A No. 1 Detroit Martin Luther King, 56-46 over Class A No. 4 Midland Dow, 60-51 over Class A No. 6 Southfield A&T, 53-35 over Ann Arbor Huron.
Players to watch: Destiny Pitts, 6-0 sr. G (22.7 ppg, 5.9 rpg, 3.3 apg, 71 3-pointers); Kaela Webb, 5-7 jr. G (14.8 ppg, 3.0 apg, 36 3-pointers).
Outlook: Country Day returned to the Semifinals last season and will try to send off Pitts with a second title in three seasons. She also was a Miss Basketball finalist and will continue at University of Minnesota. She was named Class B Player of the Year by The Associated Press, and Webb also made the all-state first team. In addition to an impressive Class A lineup and its Class B run, the Yellowjackets beat Class C semifinalists Detroit Edison PSA and Flint Hamady during the regular season.

FREELAND
Record/rank: 26-0, No. 5
League finish: First in Tri-Valley Conference Central.
Coach: Tom Zolinski, 10th season (198-45)
Championship history: Class C champion 1998.
Best wins: 68-45 over No. 9 Bay City John Glenn in the District Semifinal, 57-35 and 39-38 over Saginaw Swan Valley, 53-38 over Cadillac in the Quarterfinal.
Players to watch: Jenna Gregory, 5-10 sr. F (10 ppg, 5.3 rpg, 2.5 spg); Alyssa Argyle, 5-9 soph. F (9.7 ppg, 2.7 spg);
Outlook: The Falcons are back in the Semifinals for the first time since 2012 and with only two wins decided by fewer than 10 points. Freeland is 47-3 over the last two seasons and has dominated this one with a balanced lineup; five players average at least seven points per game, and five entered the postseason with at least 20 3-pointers. Bullock Creek was the other opponent to get within 10 points, and the Falcons beat the Lancers in the District Final by 40.

MARSHALL
Record/rank: 23-2, No. 6
League finish: First in Interstate Eight Athletic Conference.
Coach: Sal Konkle, 17th season (305-95)
Championship history: Class B champion 2016, runner-up 1981.
Best wins: 49-27 over No. 4 Grand Rapids Catholic Central in the Quarterfinal, 55-29 over Comstock in the District Semifinal, 41-40 and 50-29 over Jackson Northwest.
Players to watch: Nikki Tucker, 5-10 sr. F (15.1 ppg, 7.1 rpg); Jill Konkle, 5-6 sr. G (11.3 ppg, 43 3-pointers).
Outlook: The reigning Class B champion is surging again, avenging its second loss by beating GRCC in the Quarterfinal; the other defeat came to No. 3 Williamston on opening night. Four senior starters are back from last season’s Final. Balance and defense are again the names of Marshall’s game: six players score at least 4.8 ppg, and of the 23 wins, only that first over the league rival Mounties came by fewer than 10 points.

YPSILANTI ARBOR PREP
Record/rank: 26-0, No. 1
League finish: Does not play in a league.
Coach: Rod Wells, sixth season (129-17)
Championship history: Class C champion 2016.
Best wins: 41-39 over No. 3 Williamston in the Quarterfinal, 53-38 over No. 8 Ida in the Regional Semifinal, 38-28 over Flushing, 53-33 over Ann Arbor Huron, 72-31 over Detroit Mumford, 57-39 over Class A No. 7 Muskegon Mona Shores.
Players to watch: Adrienne Anderson, 5-7 sr. G (13.7 ppg, 4.2 spg); Ro’zhane Wells, 5-5 sr. G (10.6 ppg, 3.6 apg, 2.9 spg).
Outlook: Arbor Prep’s encore to last season’s Class C title has been to move to Class B and go undefeated. Senior forwards Cydney Williams (9.1 ppg) and Kayla Knight (4.8) joined Anderson and Wells starting in last season’s championship game, and 6-0 junior forward Lasha Petree adds another 10.4 ppg this winter. Only Williamston and Dearborn Heights Robichaud in the District Final have gotten closer than 10 points as the team has given up more than 40 only five times. Arbor Prep also downed Class C quarterfinalist Detroit PSA.