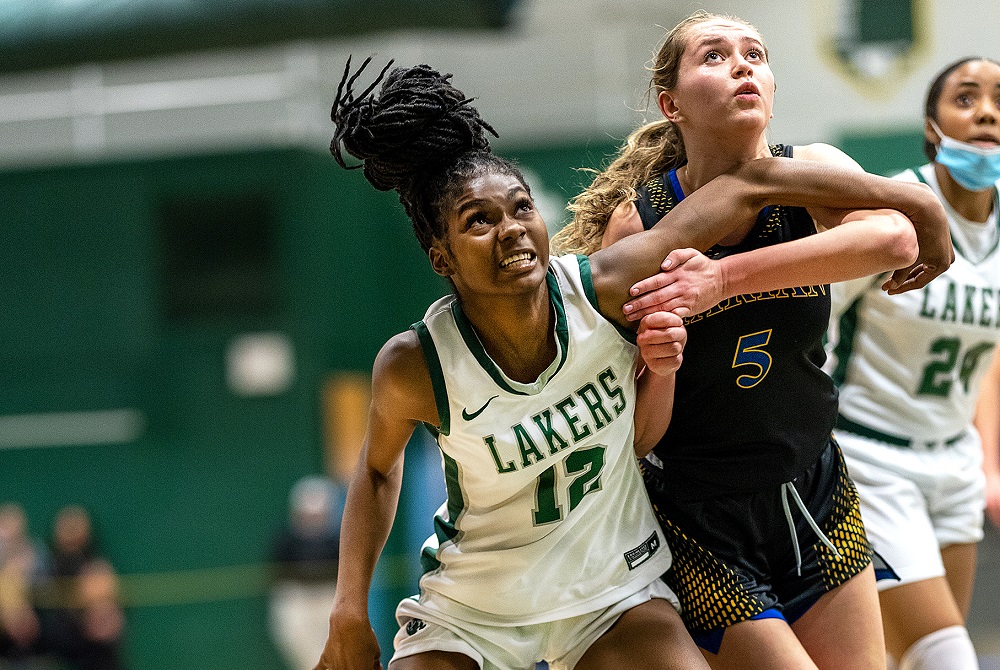 Breslin is only one more week away. And what a week it's going to be.

Regional play begins tonight with 128 teams becoming just 32 quarterfinalists by Friday. Check out “Tracking the Tournament” on MHSAA.com for every matchup, and see below for some of last week’s most notable District scores and three Regionals in each division to pay special attention to as we move closer to determining this season's champions.

1. Fowler 50, Portland St. Patrick 41 The Division 4 reigning champ Eagles (19-3) avenged losses of four and seven (in overtime) to the Shamrocks (21-1) from the regular season.

2. Portland 45, Lansing Catholic 30 The reigning Division 2 champion Raiders (21-1) made it two straight over the Cougars (19-3) after losing the first meeting in January.

3. West Bloomfield 46, Bloomfield Hills Marian 35 Both had been building notable momentum over the last few weeks, but the Lakers (20-1) advanced in the final game at Marian (15-7) for legendary coach Mary Cicerone.

Hudsonville, Mona Shores and Byron Center all were league champions in the Ottawa-Kent Conference, and Rockford was runner-up to Hudsonville in the Red with its only two losses to the reigning Division 1 champion Eagles – who also entered the tournament No. 1 overall in Division 1 MPR. But although Hudsonville has defeated all three of these teams, this hardly will be a breeze. The Eagles defeated Byron Center on Dec. 14 in overtime, 59-56, and that was the Bulldogs’ last loss this season. Mona Shores lost two more times, but avenged both on the way to sharing the O-K Green title with Muskegon Reeths-Puffer.

Dow, Carman-Ainsworth and Grand Blanc finished first, second and third, respectively, in the Saginaw Valley League, while Alpena tied for third in the Big North Conference before putting together a District run that included a win over runner-up Gaylord, a one-point victory over Marquette and a two-pointer over Traverse City Central. Next up for the Wildcats is Dow, a Division 1 semifinalist last season. The Chargers clinched the SVL with a 56-45 win over Carman-Ainsworth on Feb. 22, and surely their rematch is anticipated by most this week. But Grand Blanc has won eight straight since falling back-to-back to Dow and the Cavaliers and also will be tough seeing either or both the second time.

Mercy (No. 4), West Bloomfield (6) and North (11) all finished among the highest in overall Division 1 MPR and won league championships. Mercy also earned a 43-35 win over North back on Dec. 5, the only time any of these teams played each other this regular season – although West Bloomfield advanced with a 46-35 win over Bloomfield Hills Marian, which got past Mercy in overtime three weeks ago. Not only has West Bloomfield not lost since its season opener, it has had only one single-digit game since the start of the calendar year. Don’t look past Berkley, which defeated 2021 Division 1 runner-up Detroit Renaissance by 20 to win their District last week.

Edison and Westfield Prep finished first and second, respectively, in final Division 2 MPR, and this will be their first meeting as both played B teams for Charter School Conference games. Edison’s Ruby Whitehorn is one of four finalists for the Miss Basketball Award and keys a team that lost in-state only to West Bloomfield, 65-62 on Feb. 15. Westfield’s only loss was to Division 3 contender Ypsilanti Arbor Prep, 54-51 on Jan. 13. The other side of the bracket also has plenty of intrigue: Romulus has won 10 straight and is the Western Wayne Athletic Conference champ, while Airport is enjoying its best stretch and avenged two losses to Grosse Ile with a 48-41 District Final win.

Frankenmuth (No. 5), Ovid-Elsie (No. 11) and Swan Valley (No. 13) were among the top ranked in the final Division 2 MPR. All have impressive records and lost almost entirely to opponents that posted similarly high win totals. Frankenmuth defeated Swan Valley twice on the way to winning the Tri-Valley Conference 8, but Swan Valley’s other losses were to teams that won 17 and 18 games. The Eagles fell to Arbor Prep and Grand Blanc, but defeated Midland Dow. Ovid-Elsie lost to Goodrich but has pairs of victories over 16-game winners New Lothrop and Chesaning, and two of Belding’s defeats were to 19-game winner Sparta.

The Division 2 reigning champion Raiders finished third in final Division 2 MPR, and Chelsea was fourth. The Raiders got by a significant challenger in No. 7 Lansing Catholic with a 45-30 District Final win; the Cougars had handed Portland its only loss. The Raiders also have an early win over Williamston, by 12, and a mid-January 17-point victory over Chelsea. But to see either again they’ll have to get past Marshall, which finished second in the Interstate 8 Athletic Conference with all but one of its losses to teams that won at least 15 games and two of those defeats to Division 1 contender Parma Western (21-1). Williamston is on an eight-game winning streak that helped result in a league title, and Chelsea also won its league and can boast victories over Marshall and 18-win Battle Creek Lakeview and Tecumseh (twice).

Meridian is enjoying one of its best seasons in recent memory after going 6-9 last year and 0-21 the season before. The Mustangs won 18 straight before falling to Division 1 contender Midland Dow in the regular-season finale, and they edged Jack Pine Conference rival Farwell for the third time to claim the District title. They’ll see McBain, which won a Highland Conference that had four teams reach 15 wins this season – including runner-up Lake City, which defeated McBain in their first meeting. Oscoda also shared its league title, in the North Star League Big Dipper, and is enjoying an 8-2 stretch.

Reese, St. Charles and Sandusky are league champions, and Cass City was the runner-up to the Rockets in the Greater Thumb Conference West but with losses by only three and two points to the league title winner – the latter just two weeks ago. Sandusky is enjoying its best of a long run of excellent seasons and first undefeated this late since 2016-17. St. Charles has four victories over teams that won at least 15 games, and Reese has taken 11 of its last 12 with last week’s District title its first since 2015-16.

This loaded Regional includes the No. 2 (St. Ignace), No. 3 (Calumet) and No. 8 (Glen Lake) teams in final Division 3 MPR, and all four were league champions. Calumet defeated St. Ignace and Glen Lake on the way to last season’s Division 3 Semifinals and lost this season only to Division 2 Escanaba and Houghton. The Saints have won 17 straight and avenged one of their defeats this winter, to Sault Ste. Marie. Glen Lake last made the Semifinals in 2018, and its only defeat last season was to the Copper Kings. The Lakers haven’t had a game closer than 10 points since Dec. 7. Bark River-Harris has won 10 of its last 11 games and made a nice statement edging Menominee by four in last week’s District Final.

Baraga won its fourth-straight league title, in the Copper Mountain Conference Copper Country division, and lost this season only to Division 2 Houghton. The Vikings finished No. 10 in overall Division 4 MPR and have five and 12-point wins over Ontonagon this winter, although the Gladiators also are league champions after sharing the title in the Porcupine Mountain division. They’ve won 11 of their last 13 games, including avenging three of their defeats. Superior Central had a tough end to the regular season but downed Munising (16-6) to advance to this week and a third matchup with Carney-Nadeau, which won the first two big and has only a two-point loss to Felch North Dickinson keeping it from a perfect record. Carney-Nadeau made the Division 4 Semifinals a year ago.

The Eagles are the reigning Division 4 champions and finally got past rival Portland St. Patrick in the District Final after losing both regular-season games against the Shamrocks. But things don’t get easier this week – starting with a Sacred Heart team that’s won 11 straight and defeated its Mid-State Activities Conference co-champ Coleman to win last week’s District. On the other side, Hillman was co-champion in the North Star League Little Dipper, and has won 10 of its last 12 games. Nouvel also won a league title, in the Division 3-heavy Tri-Valley Conference 10, and hasn’t lost since opening 1-3 – with one of those early defeats by 16 to Fowler.

Posen is coming off its fifth-straight league and third-straight District championships, with its only loss this season by three to Little Dipper co-champ Hillman. Tonight’s opponent Harbor Light Christian won its first District title since 2017-18 and avenged a loss in clinching last week. Pickford finished No. 7 in overall Division 4 MPR with its only defeats to Division 3 St. Ignace and two wins by 18 over Engadine during the regular season.