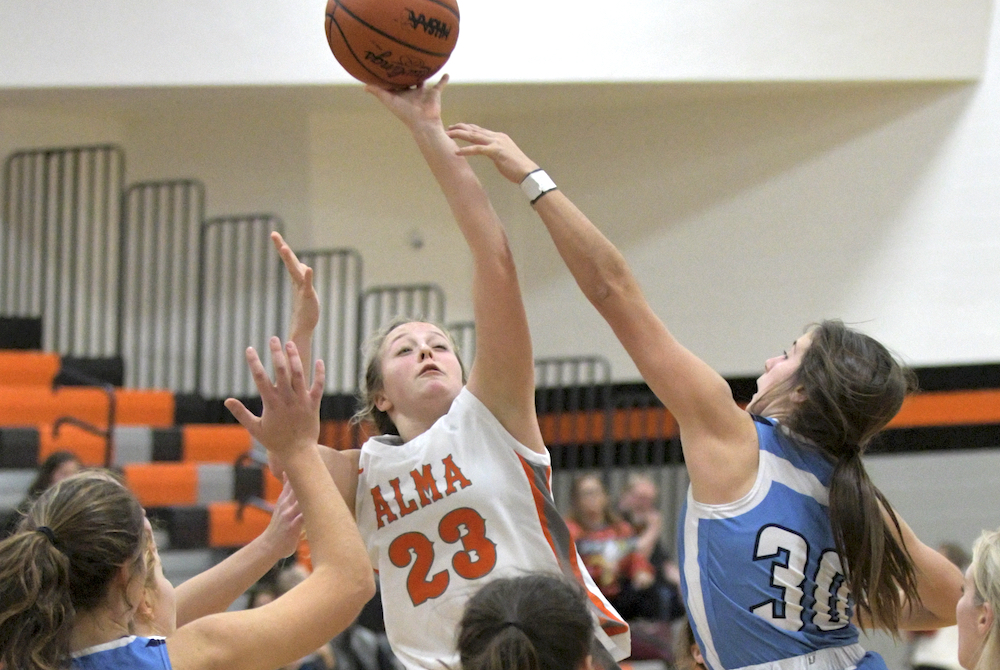 Breslin Bound is returning this week just as league play is picking up serious steam across Michigan.

Whittling down to five “Can't-Miss Contests” this week started with a group of 15, including three contests featuring pairs of undefeated teams squaring off as we move toward midseason and the most local-focused part of most schedules.

1. East Lansing 49, DeWitt 44 The Lansing area is loaded again in Division 1, with this victory possibly signaling the Trojans (5-2) as the early leader; they travel to DeWitt (7-1) for the rematch Feb. 10.

2. DeWitt 24, Haslett 22 The week was a highly-competitive one for the Panthers, and they started it by handing Haslett (7-1) its first defeat. Haslett had previously downed East Lansing.

3. Hudsonville 79, Grass Lake 51 After doubling up Grand Haven on Friday, reigning Division 1 champ Hudsonville (5-2) made it two wins in two days with this one Saturday over last season’s Division 3 winner Grass Lake (3-3).

4. Farmington Hills Mercy 35, Bloomfield Hills Marian 29 These two have decided the Detroit Catholic League Central the last five seasons, and Mercy (6-1) is a step ahead this time after this win over the reigning champ Mustangs (5-2).

Traverse City Central (6-1) The Trojans opened with a loss to Grand Haven, but are undefeated since and began Big North Conference play with a 32-26 victory over reigning champion Cadillac on Friday. And this start is worth a lot more than just an impressive record: Central finished 2-15 last year and is seeking its first winning season since 2016-17. The Trojans also started last week with a 49-40 win over Traverse City St. Francis (6-2).

West Bloomfield (8-1) The Lakers are on schedule to be in the mix at the top of Division 1, where they sit No. 8 heading into this week. That lone loss came in the season opener to No. 4 Dexter, and West Bloomfield immediately followed up by handing South Lyon East what remains the Cougars’ only defeat. The run is made even more impressive in that six of the Lakers’ seven in-state opponents are .500 or better.

Edwardsburg (6-0) The Eddies regularly are among the best from the southwest, and that hasn’t been any different this winter coming off last season’s run to 12-4 and a Regional Final. Edwardsburg is winning by an average of 45 points per game and avenged a last-year loss to Three Rivers. Undefeated Otsego (9-0) will provide a major opportunity Tuesday.

Marine City (7-1) The Mariners are another team that got started with a loss but haven’t experienced another. After falling 42-38 to Clawson (6-1), Marine City has won seven straight including over St. Clair Shores South Lake (7-2) and most recently 60-51 in overtime over St. Clair to avenge a loss from last season. The team got in only nine games last season and has already eclipsed its six 2021 wins.

Calumet (5-0) After reaching the Division 3 Semifinals last season, Calumet again is surging among a strong Western Peninsula Athletic Conference and particularly powerful northern tip of the Upper Peninsula. The Copper Kings have handed Hancock its only defeat and came back a week later to edge Negaunee by a point in another important win. Undefeated Ishpeming Westwood and Houghton are on the slate over the next two weeks as Calumet looks to continue building on a 31-game regular-season winning streak.

Sandusky (7-0) Longtime coach Al DeMott is up to 774 wins, just 23 from tying the state coaching record in girls basketball, and he’s bound to finish this season much closer to doing so after another great start. Sandusky handed Deckerville one of its two losses and Bad Axe its lone defeat, 32-30 on Dec. 9. DeMott recently received a John Wooden Legacy Award – as part of the inaugural class for high school coaches – from the National High School Basketball Coaches Association.

Athens (7-1) After also opening this season with a defeat, to Adrian Lenawee Christian, Athens has run together seven straight wins with only one by single digits. That came last week, 45-43 in overtime over Bronson, a possible contender in the Big 8 Conference. Athens is following up last season’s 17-2 finish and has won two straight Southern Central Athletic Association West titles.

Gaylord St. Mary (5-0) The Snowbirds’ quick ascension to the top of the Ski Valley Conference, where they are tied with Johannesburg-Lewiston, has included a 54-38 win over reigning Division 4 runner-up Bellaire (avenging three losses from last season) and a one-point victory over Charlevoix. St. Mary finished 13-4 a year ago and tied for the league title before falling to the Eagles in a Regional Semifinal. The Snowbirds host Johannesburg-Lewiston on Friday.

Tuesday – Holt (5-0) at East Lansing (5-2) – The Rams can show they belong in the Lansing-area elite group referenced above with this Capital Area Activities Conference Blue faceoff for first.

Tuesday – Farmington Hills Mercy (6-1) at Dearborn Divine Child (7-0) – The Falcons also own an early win over Marian and are looking to take the next step in the Detroit Catholic League Central race after finishing third the last four seasons.

Thursday – Buchanan (7-0) at Niles Brandywine (7-1) – The only loss between them was Brandywine’s also referenced above, and Buchanan is seeking to repeat as Berrien-Cass-St. Joseph Conference Red champion after Brandywine won in 2019-20.

Friday – Portland (6-0) at Lansing Catholic (9-0) – The reigning Division 2 champion Raiders won the CAAC White last season with 10 and 21-point wins over the Cougars, who can show how much ground they’ve made up.

PHOTO Alma and Essexville Garber, here facing off last month, are among hopefuls in the Tri-Valley Conference 8 this winter. (Click for more from High School Sports Scene.)