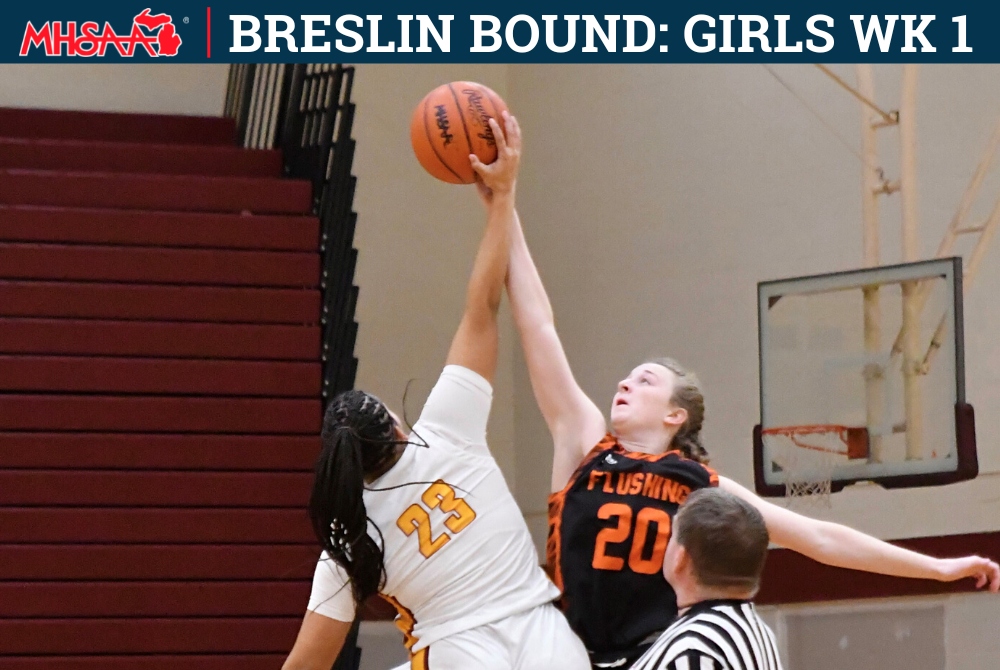 Another girls basketball season began last week – and took off in a hurry for several teams anticipating great things this winter.

Two themes generally dominate the start of a hoops season – contenders facing off in intriguing nonleague matchups, and teams that didn’t enjoy the greatest success last winter eclipsing it quickly this time around. We have plenty to tell of both as we begin another series of “Breslin Bound” reports.

1. Grand Rapids West Catholic 55, Hudsonville 50 – Last season’s Division 2 runner-up opened with this win over the 2020 Division 1 champion Eagles, who are coming off a 21-3 finish from a year ago.

3. Hart 43, Ludington 42 – The Pirates opened the season by edging the Orioles, who are coming off a Division 2 Semifinals appearance in March.

4. Grosse Pointe North 56, Detroit Country Day 45 – The Norsemen capped the season’s first week with a double-digit win over the Yellowjackets, who have made the Division 2 Semifinals two straight seasons.

Taylor (3-0) The Griffins closed 5-2 over their final seven games last winter to get to 11-11 for the season, and they’re well ahead of that pace with three first-week wins – including a 38-33 victory over Dearborn Heights Crestwood, which is coming off a 12-7 finish. This week should be telling as Taylor faces Gibraltar Carlson and Allen Park after going a combined 1-3 against them last season.

Kingsford (2-0) A 5-5 start last season turned into a 7-13 finish, but Kingsford looks to be on stronger footing early with wins last week over Felch North Dickinson 48-37 and Ishpeming Westwood 42-38. Those two handed the Flivvers losses of six and 29, respectively, to start last winter. Kingsford is seeking its first winning season since 2018-19.

Dansville (2-0) The Aggies are coming off a solid 17-8 season, especially considering they play in a league with statewide powers Portland St. Patrick, Fowler and Pewamo-Westphalia among others. Dansville lost to the two-time reigning Division 4 champion Eagles by six and 27 last season, but finished last week by handing them a 36-22 defeat.

Gwinn (2-0) The Modeltowners didn’t win a game last season until Feb. 9, and that was their lone victory. Their 19 losses included a pair to Gladstone, and Gwinn avenged those with a 41-38 win Tuesday – and then doubled last year’s win total with a 41-31 victory over Brimley on Saturday.

Manistee Catholic Central (2-0) The Sabers opened with double-digit wins over Big Rapids Crossroads Academy and Kalamazoo Hackett Catholic Prep, the latter after losing 43-30 last season as Hackett went on to finish 13-9. MCC continued to finish 14-6 and share the West Michigan D League title, and will see the first of the other two co-champions, Mesick, for the first time Friday.

Monday – Bloomfield Hills Marian (1-1) at Imlay City (2-0) – The Spartans were 19-4 last season and loaded up a strong nonleague opponent for an early test.

Tuesday – Clarkston (2-0) at Macomb Dakota (1-0) – Both are coming off 17-win seasons and will play (other opponents) in the weekend’s Best of Michigan Holiday Classic.

Friday – Fowler (1-1) at Portland St. Patrick (1-1) – Fowler may have won last season’s Division 4 championship thanks in part to a District Final win over the Shamrocks, but St. Pat won both regular-season meetings and the league title.

Saturday – Detroit Country Day (1-1) at Belleville (0-0) – The most intriguing matchup of instate opponents at the Best of Michigan Holiday Classic pits the host Tigers – who have upped their win total three straight seasons – against a Country Day team with high aspirations.