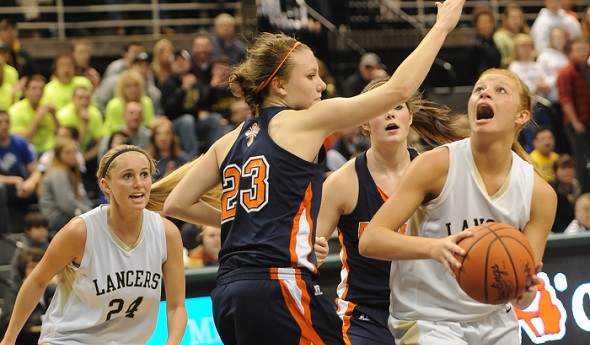 The most fun angle to this weekend's Class A and B Girls Basketball Finals at the Breslin Center is that none of the eight teams still alive in those classes has won an MHSAA championship since at least 1998.

In fact, four of the eight have never played in an MHSAA championship game.

That's not to say this is new ground for all of the teams making the trip. Aside from reigning champion Goodrich, the rest of the 2013 Class B final four returns intact. And Detroit Catholic League rivals Farmington Hills Mercy and Bloomfield Hills Marian have six champioships between them – with the guarantee one will be playing Saturday for the Class A title.

Here's a look at Friday and Saturday's schedule (Class C and D teams were previewed in a separate story earlier Wednesday):

Here's a look at all eight Class A and B teams playing this weekend:

BLOOMFIELD HILLS MARIAN
Record/rank: 23-2, No. 5
League finish: Tied for first in Detroit Catholic League Central
Coach: Mary Cicerone, 31st season (558-193)
Championship history: Four MHSAA titles (most recent 1998), one runner-up finish.
Best wins: 49-38 over honorable mention Canton, 57-54 over No. 3 Farmington Hills Mercy, 41-27 over No. 9 Farmington Hills Harrison in District Semifinal, 56-48 and 66-40 over Class B honorable mention Dearborn Divine Child.
Players to watch: Brittany Gray, 5-11 jr. F (10.1 ppg, 4.5 rpg); Kara Holinski, 5-9 jr. G (10 ppg).
Outlook: The Mustangs have returned to the Semifinals for the first time since 1998 despite only one senior. Marian has been engaged in a tug of war with Catholic League rival Mercy all season, also losing twice to the Marlins, and that continues Friday. Cicerone is the sixth-winningest coach in MHSAA girls basketball history and leads one of the most consistently successful programs with only three sub-.500 finishes since taking over in 1983. Individuals' stats don’t stick out, but balance is a strength – six players average between six and 10 points per game.

CANTON
Record/rank: 21-4, honorable mention
League finish: First in Kensington Lakes Activities Association South
Coach: Brian Samulski, ninth season (165-48)
Championship history: Has not played in an MHSAA Final.
Best wins: 42-33 over honorable mention Holly in Regional Semifinal, 31-28, 31-29 and 48-34 (District Final) over Plymouth, 36-25 over Class B honorable mention Dearborn Divine Child.
Players to watch: Paige Aresco, 5-10 sr. F (14.6 ppg, 4.6 rpg); Taylor Hunley, 5-1 sr. C (10 ppg, 7.4 rpg, 1.4 bpg).
Outlook: Canton has lost only twice more since opening with defeats to Marian and Mercy, and defensively has been incredible – the Chiefs are giving up an average of only 28 points per game and grabbing 11.6 steals per. They are seeking their first championship game berth, but missed advancing back-to-back in 2009 and 2010 falling by a total of four points.

FARMINGTON HILLS MERCY
Record/rank: 25-1, No. 3
League finish: Tied for first in Detroit Catholic League Central
Coach: Gary Morris, 10th season (164-73)
Championship history: Two MHSAA titles (most recent 1982), four runner-up finishes.
Best wins: 58-46 over No. 1 Detroit Martin Luther King in Regional Final, 73-60 over No. 2 Grosse Pointe South in Regional Semifinal, 55-54 and 40-38 over No. 5 Bloomfield Hills Marian, 37-33 over honorable mention Canton, 62-59 over Class B No. 2 Goodrich, 59-46 over Class B No. 8 Flint Powers Catholic.
Players to watch: Taylor Jones, 5-7 jr. G (12.5 ppg); Candice Leatherwood, 5-6 sr. G (10.3 ppg, 4.0 apg).
Outlook: Emerging from the most competitive Regional in any class in recent memory, Mercy looks like a strong favorite this weekend. That lone loss came to Marian, by four in overtime, and the Marlins have won 20 straight including beating both the No. 1 and 2-ranked teams by double digits last week. Balance is a strength of this team as well – nine players have scored 10 or more points in at least one game this winter.

GRAND LEDGE
Record/rank: 24-2, No. 4
League finish: First in Capital Area Activities Conference Blue
Coach: David Jones, fifth season (79-36)
Championship history: Has not played in an MHSAA Final.
Best wins: 45-44 over No. 7 Richland Gull Lake in District Final, 36-32 over No. 6 Haslett in Regional Final, 56-44 over honorable mention Kalamazoo Central in Regional Semifinal.
Players to watch: Hannah Orwat, 5-8 sr. G (15 ppg); Lindsay Orwat, 5-8 sr. G (13.4 ppg); Cori Crocker, 6-3, jr. C (10.7 ppg, 11.5 rpg, 2.6 bpg).
Outlook: The Comets came into this season with high expectations, then opened 2-2 losing to honorable mention DeWitt and No. 1 Detroit Martin Luther King in December (although Lindsay Orwat was injured for the DeWitt game). Grand Ledge has run off 22 straight wins since to advance past the Quarterfinals for the first time ever after falling to eventual champion Grand Haven in that round last season. Crocker, who has committed to play volleyball at the University of Michigan, is one of three 6-footers in the lineup.

EATON RAPIDS
Record/rank: 21-5, honorable mention
League finish: Second in Capital Area Activities Conference Gold
Coach: Willis Whitmyer, 15th season (210-122)
Championship history: Has not played in an MHSAA Final.
Best wins: 53-37 over No. 6 Ypsilanti Arbor Prep in Quarterfinal, 69-29 over No. 9 Olivet in District opener, 33-30, 45-23 (District Final) over honorable mention Jackson Northwest, 57-44 over Class A No. 6 Haslett, 43-38 over Class A No. 10 Southgate Anderson.
Players to watch: Allie Dittmer, 6-1 sr. C (14.6 ppg, 9.3 rpg, 1.6 bpg); Kathryn Mills, 5-11 sr. F (10 ppg, 4.8 rpg).
Outlook: This run has been a long time coming for the Greyhounds, who have won four District and three league titles over the last nine seasons but had never advanced to Finals weekend. Eaton Rapids has won all of its tournament games by at least 10 points and eight straight by double digits despite facing a tough road to Breslin. All five starters and a top sub are seniors.

MIDLAND BULLOCK CREEK
Record/rank: 24-1, No. 3
League finish: First in Tri-Valley Conference Central
Coach: Justin Freeland, 12th season (218-56)
Championship history: Has not played in an MHSAA Final.
Best wins: 51-45 over honorable mention Bay City John Glenn in District Final, 66-32 over No. 5 Clare in Regional Semifinal, 44-32 over honorable mention Frankenmuth, 43-33 over Class C No. 10 Saginaw Nouvel.
Players to watch: Ellie Juengel, 5-8 jr. G (12.5 ppg, 5.1 rpg); Halee Nieman, 5-11 jr. F (12.9 ppg, 5.6 rpg, 3.3 spg); Hannah Heldt, 5-7 jr. G (10.9 ppg).
Outlook: After making both the Quarterfinals and Semifinals last season for the first time, Bullock Creek has done the same this winter while suffering its only loss against league co-runner-up Hemlock. Nieman, Juengel, Heldt and sophomore forward Alyssa Mudd all started last season when the Lancers fell in overtime to Flint Powers Catholic in the Semifinal. And they could take this Breslin run to three straight, with only two seniors and no starters graduating this spring.

PHOTO: Bullock Creek's Halee Nieman works to get around Flint Powers' Ally Haran (23) while the Lancers' Ellie Juengel (24) anticipates the play during the teams' 2013 Semifinal. 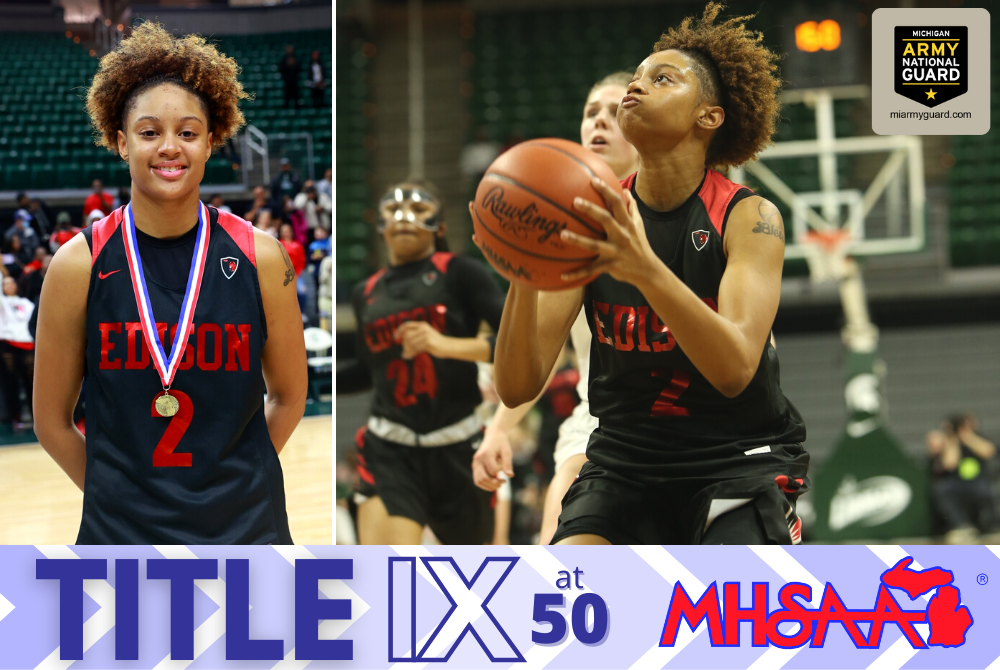