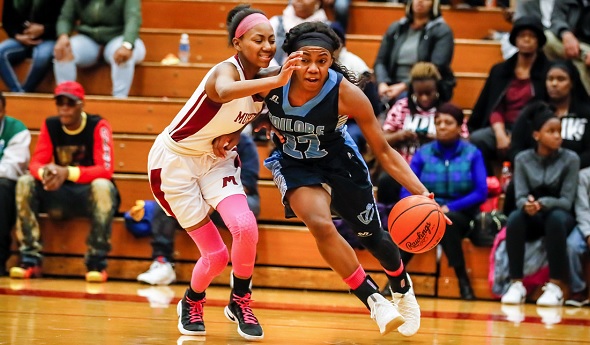 We’ve spent the regular season trying to get a grasp of which teams might be the ones to beat once the MHSAA Tournament began.

Starting tonight, every girls basketball team in Michigan gets to start over – and those favorites can show if what they’ve accomplished the last three months will carry over to the most important three weeks of this winter.

Over the next two weeks, we’ll alter the format of our Breslin Bound reports – powered by MI Student Aid – still looking at some of the key results from last week but also at three of the most eye-catching brackets in each class for the upcoming week of playoffs. This week, that means we’ll take closer looks at 12 Districts total in addition to some scores from last week that could be telling as we roll into March.

2. Bark River-Harris 73, Crystal Falls Forest Park 60 – Not only did the Broncos upset a Class D championship favorite, but they also ended up finishing ahead of the Trojans for the Skyline Central Conference West title.

5. Saginaw Heritage 52, Flint Carman-Ainsworth 22 – The Hawks finished 19-1 with this Saginaw Valley League crossover win over South champion Carman-Ainsworth, which suffered two of its three losses this season to Heritage.

Districts at a Glance

The three Muskegon teams took turns pushing each other this winter in the Ottawa-Kent Conference Black as Mona Shores won the league title, Reeths-Puffer was second and Muskegon High finished third. The Sailors – led by Miss Basketball finalist Jordan Walker – won a District title last year and made the Regional Final, and this season avenged their lone league loss to Reeths-Puffer on Jan. 20 with a two-point victory in the rematch Feb. 17. Grand Haven was the runner-up to East Kentwood in the O-K Red and hardly would be a surprise champion with wins this season over Reeths-Puffer and Muskegon (and an 11-point loss to Mona Shores.)

Heritage and Dow shared the Saginaw Valley League North title, so it wouldn’t surprise anyone if the winner of a Wednesday Semifinal between the two determines the eventual champion of this District. Heritage won the first meeting by three in overtime, but Dow won the rematch by two Feb. 10. Midland, on the other side of the bracket, could be ready to pounce in the championship game if that Wednesday winner has a letdown.

Bloomfield Hills has won 18 straight since losing early to Caledonia, running the table in the Oakland Activities Association White and earning a notable one-point nonleague win over Clarkston along the way. That’s a jump from 14-7 a year ago, when the Black Hawks fell in their District opener to Marian. The Mustangs went on to reach the Regional Final in 2016, and remain among the elite in Class A – especially considering three of this season’s losses came to Detroit Catholic League champion Farmington Hills Mercy. Bloomfield Hills and Marian would meet in the District Final this week – but Avondale will try to break into the mix as well.

The top four finishers from the O-K Green will square off again, with Hamilton coming off a perfect league run but with a one-point win over Unity in January and a two-pointer over Holland Christian last month. Hamilton and Unity meet in the 5:30 opener tonight. Coopersville, fourth in the O-K Blue, comes in with five wins over its last eight games.

The most intriguing matchup would come in the District Semifinal, where the host Panthers could see rival Frankenmuth for the first time since breaking the Eagles’ 105-game winning streak in the Tri-Valley Conference East on Feb. 7. But Birch Run must first fend off Swan Valley, which tied for second in the TVC Central behind undefeated Freeland but got within a point of beating the Falcons in their most recent meeting Jan. 31.

Freeland has won five straight District titles but will face its biggest test right away tonight in John Glenn, which eliminated the Falcons in the Regional Final last season on the way to making the Class B Semifinals. Garber in the District Semifinal and likely Bullock Creek in the championship game will give whichever team emerges tonight a few more notable obstacles this week.

It would be easy, yet unwise, to look at this District strictly from the point of view that it includes the top three teams from the Central Michigan Athletic Conference, led by champion Bath. The Bees’ losses certainly were impressive – to Class A Howell, Class B favorite Ypsilanti Arbor Prep and to Laingsburg by a bucket. But host Carson City-Crystal has an argument as the favorite; it finished runner-up in the Mid-State Activities Conference to Class D power Mount Pleasant Sacred Heart and split with the Irish. Byron, meanwhile, shared the championship in the Genesee Area Conference Blue and takes on the Eagles tonight.

There are only four teams at this District, but it’s quite a group. Munising has won all of its games by at least 13 points and all but one by at least 20. The Mustangs are led by a strong senior class that won last season’s District but was stopped by Crystal Falls Forest Park in the Regional; Forest Park is in Class D this season, and regardless Munising beat the Trojans in that 13-point victory. Negaunee and Ishpeming finished second and third, respectively, in the Mid-Peninsula Athletic Conference and are formidable as well; Negaunee won its District in 2016.

We’ve mentioned more than once this season the strength of Class C in the Thumb, and some of those contenders will face off immediately this week. Undefeated Sandusky is on one side of this bracket and could see the winner of a Reese/Kingston Semifinal – although Millington surely will give Kingston a challenge tonight. Sandusky has wins over Marlette (twice), Reese and Kingston this season and hasn’t allowed an opponent to come closer than 10 points.

Our Lady is coming off losses to Class C Royal Oak Shrine and Class B Livonia Ladywood, but made the Class D Semifinals last season and prepped earlier this winter with defeats to Class B Detroit Country Day and Harper Woods Chandler Park and Class A Clarkston. Still, the Lakers could get an early test in Wednesday’s Semifinal against Franklin Road Christian, which has doubled its win total from last season when it won a District title.

All but Ontonagon are from the Copper Mountain Conference’s Copper Country division, so it’s expected the field will be chasing league champion Baraga again. The Vikings did split with runner-up Painesdale-Jeffers during the regular season and got by Chassell by only two points in their second game, so this week could be tightly-contested. Chassell won the District a year ago.

Four of six teams in the Eastern Upper Peninsula Athletic Conference won at least 12 games during the regular season, and three of them are in this District. Pickford downed DeTour by 15 and nine in their meetings and split with Cedarville, winning the rematch Feb. 2. The Panthers are playing for a third straight District title.

PHOTO: Muskegon Mona Shores and Muskegon High, facing off earlier this season, are together in one of the strongest Class A Districts this week. (Photo by Tim Reilly.)