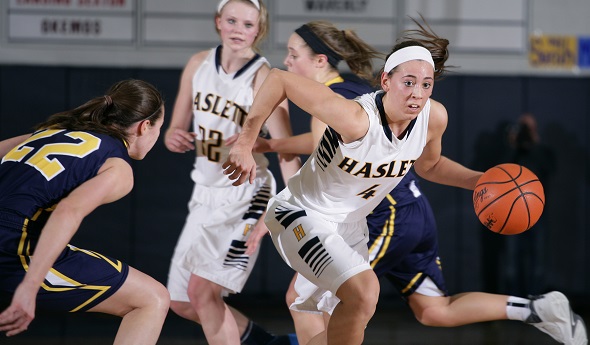 District tournaments give teams the best kind of opportunity to pay back their neighbors for a disappointing loss (or two) from earlier in the winter.

Win, and the avenging team not only gets that revenge – but ends the opponent’s season.

A number of MHSAA girls basketball teams took advantage of those opportunities last week. And some of the more fortunate fought off a rival or two for the third time – another difficult task unto itself.

Below are four teams from each class that made impressions during the District tournaments. Regionals tip off tonight.

Haslett (22-1) – The Vikings have rattled off 22 straight wins since falling to another eventual Class B District champ, Eaton Rapids, on opening night. Haslett’s District title run included wins over East Lansing and Okemos followed by a third this season over rival DeWitt – a team that was capable as Haslett of making a run deep into this month if it had advanced instead.

Rochester Hills Stoney Creek (18-5) – The Cougars finished a game behind Clarkston in the Oakland Activities Association Red standings, losing to the Wolves by 10 and five points. But Stoney Creek won their third matchup, the District Final, 47-37. Not a bad way to step back up after finishing the regular-season on a 4-4 streak.

Waterford Kettering (20-3) – Friday provided some redemption for the Captains. They won the Kensington Lakes Activities Association North title by a game over Waterford Mott (also 20-3), then lost to Mott during the league tournament before beating Mott in the District Final 55-52 in overtime. The District sweep also came after Kettering finished the regular season with two straight losses.

Wyoming (21-2) – The Wolves now have won 21 games in each of their first two seasons as a school (created by the merger of Rogers and Park). And this season, they haven’t lost since Dec. 16. Wyoming’s opponent that night was Holland West Ottawa – and it avenged that 55-35 defeat by downing West Ottawa 48-46 in the District Final after surviving Grandville 58-57 in the Semifinal.

Ionia (18-5) – The Bulldogs finished third in a Capital Area Activities Conference Red that featured Class A contenders Haslett and DeWitt, and that no doubt prepared them well for last week’s run that included beating CAAC White co-champ Portland in the District Final. Ionia also had beaten Portland by six during the last week of the regular season before winning Friday 57-32.

Menominee (14-7) – Winners of 10 games last season, the Maroons opened the District with a 55-45 win over league mate Gladstone, which it split with during the regular season. But the victory that resonated louder came in the Final, a 48-39 upset of 2013 MHSAA Semifinalist Houghton – which finished this season 19-3.

Parchment (21-2) – The Panthers have challenged to join the elite for a few seasons, but opened the 2013 District by falling by seven to Marshall – which went on to reach the Quarterfinals. But Parchment opened last week’s District with a seven-point win over Marshall and finished with a 35-29 edging of Battle Creek Harper Creek (15-7).

Ypsilanti Arbor Prep (20-3) – The Gators moved from Class C to B this school year, and this team is already two wins better after falling to eventual C champion Manchester during their second game in last season’s tournament. Arbor Prep took on a strong variety of opponents this season with wins over Benton Harbor, Southfield-Lathrup and Detroit Country Day, plus Manchester early.

Adrian Madison (19-1) – Madison was another powerful team that fell to Manchester during the latter’s championship run, but the Trojans might be the one to contend with this time. They followed a 10-point win over Addison with a 45-34 victory over previously-undefeated Pittsford in the District Final.

East Jackson (18-4) – Last week’s District at East Jackson looked to be pretty competitive, and the host beat two strong contenders to emerge with the title. East Jackson came off its Cascades Conference championship by beating 16-win Michigan Center by 18 and then frequent Class C contender Concord 46-43 in the championship game.

McBain (19-2) – The Ramblers finished a perfect run through the Highland Conference and then won all three District games by double figures. They eliminated 17-win Traverse City St. Francis 57-42 in the District Semifinal and 16-win Maple City Glen Lake 57-35 in the championship game.

Bellaire (20-3) – The Eagles finished one game back of champion Gaylord St. Mary in the Ski Valley Conference standings, despite handing the Snowbirds their only league loss this season. But Bellaire made it two straight over St. Mary with a 44-32 win in the District Final.

Fowler (16-6) – These Eagles have had some solid teams over the last decade plus – but have spent most of that time in the shadow of rival Portland St. Patrick, a regular at the MHSAA Finals. Fowler fell to St. Patrick by seven on Feb. 15 – but came back to edge the Shamrocks 62-60 in the District Final.