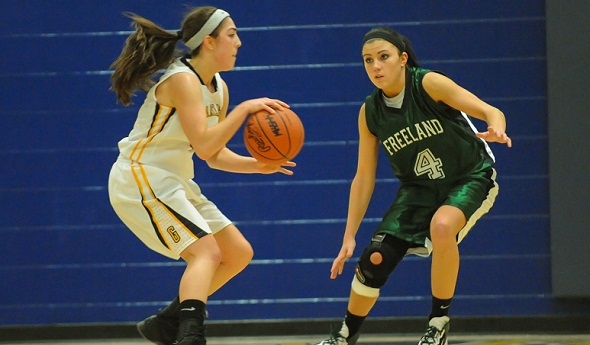 Three reigning MHSAA girls basketball champions remain alive as we head into the final week of this season. They and two reigning runners-up are only one win away from returning to Michigan State University's Breslin Center.

But 27 more teams also sense how close they are to booking trips to East Lansing. That added ounce of motivation could go a long way in tonight's Quarterfinals across the state.

See below for a quick glance at all 16 games being played this evening. And click here for brackets including tip-off times and sites for every game.

Grand Ledge (21-4) vs. Grand Haven (25-0): The reigning Class A champion Buccaneers and 6-foot-5 center Abby Cole achieved something they didn't last winter by going undefeated this regular season. The Comets have taken big leaps of late – improving from eight, to 11, to 15 and now 21 wins over the last four seasons and already knocked out a Miss Basketball candidate in defeating Mattawan.

Grosse Pointe South (23-1) vs. Birmingham Marian (21-3): Grosse Pointe South is the reigning Class A runner-up and has rattled off 23 straight victories since losing on opening night to Chicago Whitney Young. Marian, with just a three-point loss a few weeks ago, is one of only a few to play King close this season, and is succeeding with no player averaging more than 9.8 points per game.

Saginaw Heritage (16-9) vs. Dexter (22-3): A lineup featuring three sophomore starters has led Heritage to its best season since 2005. Dexter won its first Regional title since earning back-to-back in 1997-98, and similar to Marian has four scorers averaging more than seven points per game but none averaging eight.

Clare (23-1) vs. Midland Bullock Creek (22-3): Clare has won a lot and won big; its only game within 10 points this season was a one-point loss to Saginaw Nouvel on Dec. 4. Two sophomores and a senior averaging double figures scoring have led Bullock Creek to its first District title since 2008 and now farther.

Detroit Country Day (18-3) vs. Flint Powers Catholic (19-6): Country Day won its eighth-straight Regional title and is led by guard Asia Doss scoring a team-high 13.3 points per game. Powers is back to being a power after going only 8-13 a year ago. Senior forward Kim Berry leads the way with 13.9 ppg.

Goodrich (22-3) vs. Livonia Ladywood (17-7): Reigning Class B champion Goodrich had a few hiccups after going undefeated in 2011-12, but could run away with the title again led by Miss Basketball runner-up Taylor Gleason (21.6 ppg). Ladywood will try to stop that run tonight while led by another high-scoring senior guard, Andrea Anastos (19.8 ppg).

Niles Brandywine (24-0) vs. Manchester (24-1): Brandywine has made the Quarterfinals all four seasons under coach Josh Hood and made the Semifinals in 2010. Manchester hopes to get there keyed by a pair of seniors – 6-foot-1 forward McKenna Erkfrtiz and 5-5 guard Taylor Manders – both averaging more than 14 points per game.

Riverview Gabriel Richard (15-7) vs. Flint Hamady (22-3): Senior Ashley Henderson is averaging 16 points per game and had 30 in Gabriel Richard’s Regional title win over Madison Heights Bishop Foley. Last season was the only one over the last four that Hamady didn't make at least a Quarterfinal, and it’s looking to get back to a championship game for the first time since winning Class C back-to-back in 2009-10.

Delton Kellogg (21-4) vs. Saginaw Nouvel (23-2): Kellogg has increased its win total all three seasons under coach Mike Mohn, and has followed a third-place finish in the strong Kalamazoo Valley Association to bigger things. But Nouvel will be the toughest opponent this season; the Panthers have their best record since back-to-back championship runs in 2006 and 2007-08.

Shelby (21-3) vs. Houghton (22-2): Shelby has won at least 18 games all three seasons under coach Sarah Wolting, and this season claimed its first postseason titles under her leadership. Junior forward Elisa Jurmu is averaging 19.9 points per game as Houghton makes its first Quarterfinal appearance since 2009.

St. Ignace (24-0) vs. Crystal Falls Forest Park (23-1): The Saints made the Class C Semifinals in 2012 and didn't have their first close game this winter until a 74-68 win over previously-undefeated Posen. Crystal Falls Forest Park is trying to return to the Class D Semifinals and is again led by one of the state’s top juniors – 6-0 Lexi Gussert, who is averaging 32.5 points and 10.9 rebounds per game.

Climax-Scotts (19-5) vs. Gaylord St. Mary (23-2): Five senior starters have Climax-Scotts in the Quarterfinals for the first time in coach Dana Perrin’s three seasons as coach. Junior guard Kari Borowiak is averaging more than 17 points per game for a St. Mary team that hasn't lost since Dec. 18.

Athens (21-3) vs. Plymouth Christian (18-6): This is Athens’ third-straight Quarterfinal berth and it will be looking to return to Breslin after advancing to the championship game in 2012. Plymouth Christian gave reigning champion Waterford Our Lady a scare early this season and played one of the toughest schedules of any Class D Quarterfinalist.

Waterford Our Lady (19-4) vs. Mount Pleasant Sacred Heart (16-7): Guards Lexie Robak and Ava Doetsch can finish this week as four-time MHSAA champions and have started for Our Lady all four of their high school seasons. Sacred Heart is back in the Quarterfinals for the first time since 2010 and hopes to avenge a 50-38 loss to Our Lady on Dec. 15.

PHOTO: Goodrich guard Taylor Gleason (22) will try to lead her team to a second-straight Class B championship this week. (Click to see more at HighSchoolSportsScene.com.)