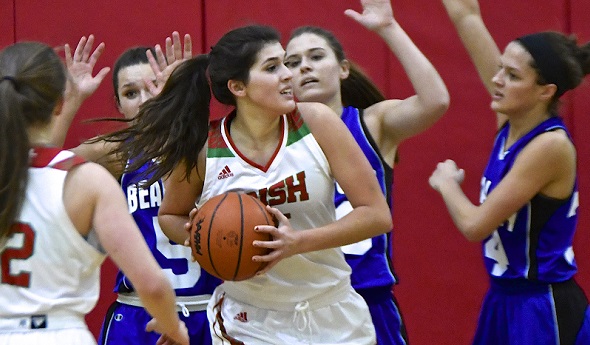 It was not intentional that the five results from last week’s Districts highlighted in this week’s “Breslin Bound” report all came from Class A.

Rather, it’s an indication just how many contenders there appear to be in that tournament this season – and no doubt this week’s Regionals in the other three classes will provide similar excitement.

Below is a glance at those five District games that popped off the bracket most, plus a look at three Regionals of particular note in each class – all powered by MI Student Aid.

1. East Lansing 48, DeWitt 47 – The Trojans avenged a one-point loss to the Panthers from the second week of this season in a matchup of Capital Area Activities Conference champions.

3. East Kentwood 51, Grand Rapids Christian 49 – The Falcons also haven’t lost since the season’s first week, but just got past the Eagles in another Class A Final, this one a matchup of Ottawa-Kent Conference champs.

5. Midland Dow 37, Saginaw Heritage 30 – This was a Class A District Semifinal, but matched rivals that had split during the regular season; both had aspirations of winning the MHSAA championship, and Dow went on to win the District.

King has continued to turn away its share of tough opponents as it looks to return to the Class A championship game after finishing runner-up a year ago. The Crusaders could see two more this week; Dearborn also faced King in a Regional Semifinal last season and is two wins better than a year ago, and potential District Final opponent Southfield Arts & Technology has faced its share of contenders as well and has been considered one since the start of this winter. Churchill lost seven of its last eight to finish the regular season, but has gotten on the right track during the playoffs.

With their only loss to King on Dec. 17, the Eagles are on a fantastic run and rightly should have dreams of their second Regional title in three seasons. They won a Kensington Lakes Activities Association overall title with Novi and Walled Lake Western also part of the bracket, although Hartland didn’t see either. As noted above, Mercy is the Detroit Catholic League A-B champ but had a scare in the District Final. Those two face each other Tuesday, with Western a KLAA division champion and Novi a runner-up on the other side of the bracket.

East Kentwood and Mona Shores both had District scares as well, East Kentwood’s against Grand Rapids Christian mentioned above and Mona Shores a one-point Semifinal win over rival Muskegon. They face each other in one Semifinal this week, while on the other side Hudsonville is looking to repeat its 2016 trip to the Class A Semifinals and Forest Hills Northern is on a six-game winning streak that has included multiple wins over the champion of its O-K White, Lowell.

Mumford will start its pursuit of a repeat Quarterfinal trip with another strong Detroit Public School League team in Collegiate Prep, which has added six wins to its total from 2015-16. On the other side of a wide-open bracket, Center Line has won six of its last eight while making the Macomb Area Conference Blue-Gold Tournament championship game, and Redford Union has reversed course from last season’s 6-15 finish.

Freeland’s run to the Tri-Valley Conference Central title included a one-point win over Swan Valley, a possible Regional Final opponent. The Vikings open with Ithaca, a Class C semifinalist last season, while the Falcons will look to keep their perfect run alive against a Corunna team that has improved from 9-12 a year ago.

Hamilton, Oakridge and GRCC all won league championships, and Tri-County was a co-runner-up. Oakridge’s losses came back-to-back in December, and it is undefeated in 2017 as it takes on Hamilton in a Regional Semifinal for the second straight season – and with the opportunity to see GRCC in the title game also for the second straight winter. Hamilton’s only loss also was in December, to Class A Hudsonville, and GRCC’s defeat came on opening night to Class A Mona Shores.

Grass Lake won the Cascades Conference with a sweep of Michigan Center by 10 (in overtime) and 24. But the Cardinals have won 11 straight. To get a rematch, they first must get by Blissfield, the Lenawee County Athletic Association champion and owner of an 18-game winning streak with losses this season only to Class A Utica Ford and Class B Bay City John Glenn. And don’t forget about Greenhills, which also has won 11 straight and 15 of its last 16 after also going 17-4 last winter.

It’s hard to believe Hamady hasn’t won a Class C title since 2010; the Hawks are always in the mix and have won four Regionals this decade alone. But this could be one of their greatest challenges at this level of the tournament; Sandusky is playing for its first Regional title since 1999 and has been barely challenged, with only Harbor Beach getting as close as 10 to matching the Redskins. Sandusky, Harbor Beach and Brown City finished in the top three spots in the Greater Thumb Conference East. Hamady has seen its share of top teams, however, with losses to four others that also celebrated District titles last week – Detroit Country Day, Goodrich, Detroit Edison and Flushing.

None of these teams won league championships, a testament to the tough competition they’ve faced in prepping for the postseason. Brandywine finished third in the Berrien-Cass-St. Joseph Red to Class B Comstock and Buchanan (which shared the title) and is seeking its third straight Regional championship and sixth in seven seasons. Bronson finished second in the BCS Blue and is seeking its first Regional title since 2002, and Hackett and Schoolcraft tied for second in the Southwestern Athletic Conference Valley and are both seeking a first championship in this round of the tournament.

It’s been quite a closing run for Pittsford’s veteran crew, who have won 50 straight since falling in the Class D Final in 2015. First up this week is Morrice, which has won 11 straight and shared the Genesee Area Conference Blue title, while on the other side waits a possible familiar foe – Hillsdale Academy finished second to Pittsford in the Southern Central Athletic Association East. The Colts begin Regional play with Mid-South Conference champ Rudolf Steiner, which lost only to Class C Whitmore Lake.

A championship game between Skyline Central Conference West rivals Bark River-Harris and Crystal Falls Forest Park would be charged; the Trojans beat Bark River-Harris by 13 early but saw the league title slip away with a 13-point loss to the Broncos in the regular-season finale. Not that Jeffers, with 12 wins over its last 14 games, will go easily in its Regional Semifinal against Bark River-Harris. Big Bay de Noc finished last in the SCC East but beat the second and third-place teams to win last week’s District.

Sacred Heart, last season’s Class D runner-up, has dominated again with only a loss to Carson City-Crystal, and only the Eagles and Merrill have gotten within single digits of the Irish so far. Tri-unity, which like Sacred Heart fell to eventual champion Pittsford during last season’s tournament, is looking to return to the Quarterfinals for the second straight. Especially intriguing is Calvary Christian, which finished ahead of Tri-unity to win the Alliance League and is a one-point December loss to Class C Mason County Central from a perfect season but has never won a Regional. To get that opportunity, Calvary will first have to beat Mason County Eastern, which has righted itself after losing three of four at the end of the regular season.

PHOTO: Mount Pleasant Sacred Heart, here against Beal City, plays this week in what could be one of the toughest Regionals in Class D. (Click for more from HighSchoolSportsScene.com.)