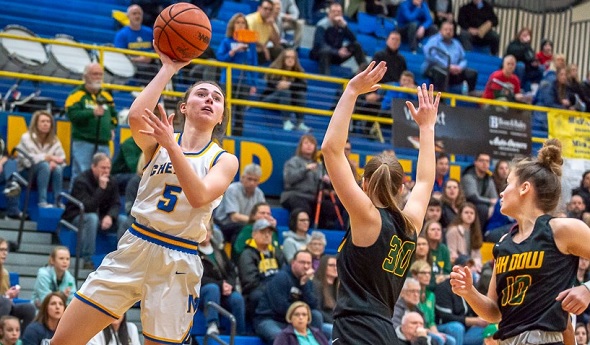 Welcome to 2020 as we charge full steam ahead into the post-holiday portion of a girls basketball season that has begun with the usual mix of predictability and surprises – and will end with a bit of a twist.

Remembering that this season will see the top two teams in each District seeded for the first time, we’d like to take this week to introduce the Michigan Power Ratings (MPR) on MHSAA.com. Teams are searchable and comparable both by division and District number, and every Monday during the regular season we’ll also pull a top 20 in each division and post them on our Second Half rankings page.

There’s a full explanation of how MPR is calculated, and for the rankings teams were considered this week that had played at least four games against opponents that also are eligible for the MHSAA Tournament, since MPR includes only those opponents in its calculation. So you won’t see undefeated Detroit Edison or Menominee in this week’s Second Half rankings – but those teams are sure to join the list over the next week or two as they play more MHSAA opponents.

Below is a look at some of what you may have missed in holiday hoops during the break. “Breslin Bound” is powered by MI Student Aid and based on results and schedules posted for each school at MHSAA.com. Send corrections or missing scores to Geoff@mhsaa.com.

2. East Grand Rapids 42, Southfield Arts & Technology 41 – The Pioneers should be dangerous contenders in league play and more after finishing their 2019 part of the schedule with a win over last season’s Division 1 runner-up.

3. Detroit Edison 68, Columbus Africentric Early College 59 – The reigning Division 2 champion avenged its lone loss of 2018-19 to move to 6-0 this winter.

4. St. Ignace 65, Ann Arbor Huron 52 – Even with a loss two days later to Ann Arbor Pioneer, Division 4 St. Ignace had to be happy heading home having dealt Division 1 Huron its only defeat.

5. Ypsilanti Arbor Prep 53, Southfield Arts & Technology 50 (2 OT) –Arbor Prep finished a tough couple of days for A&T. But although the Gators also lost two days later by two to Division 1 Brighton, in both games they showed they’ll again be tough against the teams in their Division 3.

Midland (6-0) Dow has most recently ruled the Midland area in girls basketball. In fact, Midland High went only 5-16 last season. But the Chemics have bounced all the way back, with double-digit wins in all but one game – their 38-31 victory over Dow on Dec. 19. Also impressive was a 15-point win over another Division 1 team on the rise, Macomb L’Anse Creuse North, at the Motor City Roundball Classic.

Temperance Bedford (6-0) The Kicking Mules’ Southeastern Conference Red is loaded, with Saline also unbeaten and Ann Arbor Huron and Pioneer with just one loss apiece. But after opening with a seven-point win over Flat Rock, Bedford has won its next five by an average of 29.4 ppg – a big return after last season’s Quarterfinal run.

Grand Rapids Christian (7-0) After 13-9 and 11-11 finishes the last two seasons, respectively, this one could see the Eagles take a step back into the elite. They earned a Cornerstone Holiday Tournament title with wins over Forest Hills Central and Zeeland East and have only one other single-digit win among their first five – a 54-46 overtime avenging of last season’s loss to Holland Christian.

Menominee (7-0) The Maroons followed up two straight .500 finishes by going 15-9 with a District title last winter, and the surge has continued. A 52-47 win over otherwise-unbeaten Ishpeming Westwood on Dec. 18 was impressive, and Menominee spent part of its holiday break winning a tournament in Gillett, Wis., with a pair of double-digit victories.

Manton (6-0) Manton is one of two Highland Conference teams entering 2020 unbeaten – rival Lake City being the other – and the reigning league champion Rangers have won six straight by double digits after opening with a 52-49 win over Charlevoix. Along the way, they also handed the lone losses to Kingsley and McBain Northern Michigan Christian – and get another major test Wednesday against Maple City Glen Lake.

Fruitport Calvary Christian (5-2) The Eagles’ season has been book-ended so far by a pair of losses to Division 3 teams, the most recent to one-loss Hart on Saturday. But a 50-46 win over Division 2 Central Montcalm the day before can’t be overlooked – the Hornets are 4-2 but hadn’t lost a regular-season game for two straight heading into this winter. Senior Kelsey Richards’ scoring gives Calvary a shot to make a run at any time.

Pickford (7-0) The Panthers closed the 2018-19 regular season with seven straight wins and 13 over their final 14 games to claim the Eastern Upper Peninsula Athletic Conference title by a victory ahead of Cedarville and Rudyard. They don’t see either of those teams until later this month, but they’ve set the standard so far with all double-digit wins and four by 30 points or more. A 62-46 win over Gaylord St. Mary on Dec. 4 remains the Snowbirds’ only defeat.

Monday – Southfield Arts & Technology (4-3) at West Bloomfield (5-1) – This will surely affect the Oakland Activities Association Red race; both are perfect in league play, and both teams’ losses have come against some of the state’s best.

Tuesday – Detroit Edison (6-0) at East Lansing (5-0) – Contenders in Divisions 2 and 1, respectively, face off with one accepting its first defeat of this season.

Thursday – Calumet (5-1) at Ishpeming Westwood (4-1) – These two are looking early like two of the Upper Peninsula’s best in any division, and that means they could see each other in the Division 3 postseason as well.