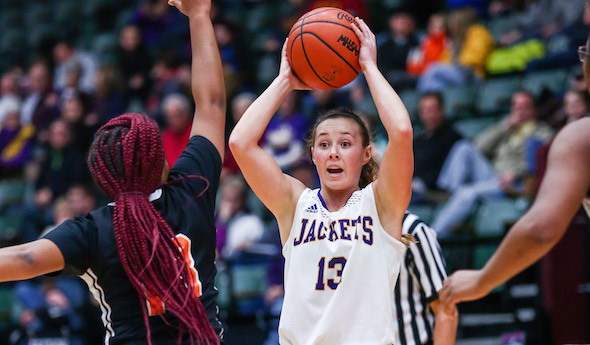 Another Michigan girls basketball regular season will come to a close Saturday. But there’s still plenty to be determined as we prep for the start of the MHSAA Tournament.

A number of league titles still must be decided – some of those races are detailed below. The Detroit Public School League and Detroit Catholic League have a solid Operation Friendship doubleheader lined up as well, and a few more possible contenders next month will test themselves one more time before winning becomes a necessity to stay on the court.

Below is the final Breslin Bound girls report – powered by MI Student Aid – of the regular season. Next week we’ll switch things up to look at some of the most intriguing Districts from all four classes.

2. Royal Oak Shrine 52, Waterford Our Lady 49 – Shrine had fallen to Our Lady by 20 last month, but most memorable was this Catholic League C-D Final win reportedly gave the Knights their first league title in 23 years.

5. Marquette 43, Houghton 40 – Ten days after falling to Houghton in a matchup of arguably the best in the Upper Peninsula, the two-loss Redettes handed the Gremlins their first defeat in the rematch.

Detroit Martin Luther King (18-1) – The Crusaders’ latest run to the Detroit Public School League title saw only Detroit Renaissance (nine) keep a game within 20 points. King also handed Hartland its only loss and has wins over Muskegon Mona Shores and Clarkston, with its only defeat to Country Day at the end of December.

Farmington Hills Mercy (17-2) – The Marlins have run off 13 straight wins since suffering their two losses before Christmas. They avenged that second loss, by 15 to Dearborn Divine Child, with a 15-point win over the Falcons. Mercy beat rival Bloomfield Hills Marian in last week’s Catholic League A-B Final after falling to Marian by 19 in last season’s title decider.

Birch Run (15-3) – The Panthers have won eight straight in addition to handing rival Frankenmuth its first league loss in more than 100 Tri-Valley Conference East games two weeks ago. The two losses were by a point to the Eagles and three to Hemlock in a league crossover – and with three more wins they would equal last year’s 18-4 finish.

Pewamo-Westphalia (16-2) – The Pirates trail leader Bath by a win in the Central Michigan Athletic Conference after falling twice to the Bees, but did finish last week with a win over one-time Class C No. 1 Laingsburg. P-W also owns an early win over Ithaca, in Class B now but a C semifinalist a year ago.

Saginaw Valley Lutheran (15-4) – The Chargers opened 3-3 with three straight losses to end December, and then fell to TVC West rival Ithaca in mid-January. But they are on a nine-win run and avenged that loss to the Yellowjackets with a 39-35 win Friday. Valley Lutheran finished only 9-12 a year ago.

Crystal Falls Forest Park (16-3) – The Trojans will play Bark River-Harris on Thursday for the Skyline Central Conference West title (outright or shared depending on how the Broncos do with Powers North Central on Monday). Forest Park is 14-1 since dropping two games over the first two weeks, and avenged both of those losses against the Jets and Kingsford.

Pittsford (18-0) – The reigning Class D champion has won 45 straight and rarely has been challenged this season, with its closest wins by 12 over Manchester and 18 over Grass Lake – both Class C teams. The Wildcats have held opponents to fewer than 20 points nine times following an experienced group of leaders hoping to graduate with a repeat.

Thursday – Detroit Martin Luther King (18-1) at Farmington Hills Mercy (17-2) – The headlining Operation Friendship game is one of the biggest in Class A this regular season (see why above).

Thursday – Traverse City St. Francis (16-1) at Gaylord St. Mary (17-1) – This meeting of league leaders will be a nice test for both as they go separate ways (St. Francis to Class C, St. Mary to Class D) for the postseason.

Thursday – Monroe St. Mary Catholic Central (14-3) at Ida (16-2) – This is another great test as well, as the Class C Kestrels and Class B Bluestreaks look forward to Districts.