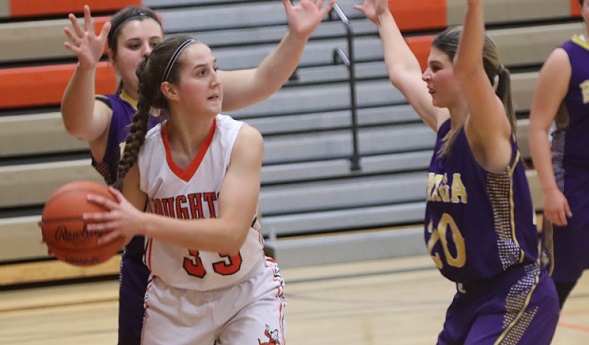 A total of 15 girls basketball teams remain undefeated through what was the midpoint of this season for most across Michigan last week.

But four teams also lost for the first time as league standings began to take shape and contenders began the juggling that will continue over the next month.

Check out the “Rankings” tab above for a list of those with the best records across all four classes, to be updated every Monday during the rest of this winter. Meanwhile, here’s a look at some of what stuck out most for this Breslin Bound report, powered by MI Student Aid.

1. Saginaw Heritage 50, Midland Dow 47 (OT) – The undefeated Hawks have the upper hand again in the Saginaw Valley League North after Midland took a share of the league title last season by winning their second meeting; the rematch this time is Feb. 10.

2. Sandusky 54, Harbor Beach 35 – The Redskins remained undefeated and took a one-win lead in the Greater Thumb Conference East standings in handing Harbor Beach its first loss in the league and overall.

3. Ithaca 58, Frankenmuth 40 – This is a great sign for Ithaca’s move from Class C to B this season; the Yellowjackets improved to 8-1 while handing the Eagles only their second loss.

4. Farmington Hills Mercy 33, Bloomfield Hills Marian 30 – Mercy added this win to a one-point victory over its Detroit Catholic League Central rival Dec. 9 and cemented itself as the Class A team to watch from that always-strong league.

5. Muskegon Reeths-Puffer 57, Muskegon Mona Shores 48 – Mona Shores could still be a contender in Class A and definitely was the favorite in the Ottawa-Kent Conference Black this winter, but Reeths-Puffer has to be as much a part of both conversations after this win.

Hudsonville (11-1) – A Class A semifinalist last season, Hudsonville opened the O-K Red schedule with a loss to now-.500 Rockford. But the Eagles are back in the title mix with four straight league wins including an impressive 53-43 victory last week over Caledonia.

Utica Ford (10-1) – The Falcons have found a home after finishing 10-13 overall and last in the Macomb Area Conference Red a year ago. Ford’s loss came on opening night to Romeo, by just four, and it leads the MAC White.

Houghton (11-0) – After surging at the end of last season to finish 16-7 and win a District title, Houghton has kept it rolling and last week downed rival Calumet 56-40 and being swept by the Copper Kings in 2015-16. All but one win this season have been by 15 or more points.

Jonesville (9-2) – After opening with a pair of losses to Michigan Center and Springport (which are both 9-1) by a combined five points, Jonesville is surging and trails first-place Springport by just a win in the Big 8 Conference. Last week included a 42-40 overtime edging of Adrian Madison, which also is 9-2.

Burton Bendle (10-1) – The Tigers improved from six to 12 to 16 wins over the last three seasons, respectively, and have their sights set on a Genesee Area Conference White title after avenging its only loss this season, to New Lothrop, with a 39-29 win Friday.

Gaylord St. Mary (9-1) – The Snowbirds also opened with a loss, to Class B Clare, but look more like the team that made the Quarterfinals last season and missed advancing farther by just a point. They took over the Ski Valley Conference lead alone last week with a 15-point win over Bellaire.

Hillman (9-1) – The Tigers have rattled off nine straight wins since falling by three to Cedarville on opening night. A 58-37 defeat of Rogers City not only handed their rival its second loss this winter, but put Hillman in first alone in the North Star League Big Dipper as it looks to repeat as champion.

Monday – Freeland (10-0) at Ithaca (8-1) – This Tri-Valley Conference crossover features the leaders of the Central and West, respectively, and two that could meet again in the Class B postseason.

Monday – Comstock (9-1) at Buchanan (9-0) – This is the first of two matchups between the leaders of the BCS Red over the next two weeks; see more on Comstock above.

Tuesday – East Kentwood (10-1) at Hudsonville (11-1) – The Eagles, also discussed above, took only one loss in the O-K Red last season … from East Kentwood, the current league leader.

Tuesday – Manchester (7-3) at Pittsford (12-0) – The reigning Class D champion Wildcats have won 39 straight and will get arguably their toughest test of the regular season in this matchup against the Class C Flying Dutchmen.

Saturday – Ypsilanti Arbor Prep (12-0) at Ann Arbor Huron (8-3) – Arbor Prep, after winning Class C last season, is a favorite in Class B this time and gets one of its two biggest tests so far against Class A Huron.

PHOTO: Houghton's Morgan Colling looks for an open teammate as Baraga's Justice Kinnunen (20) helps trap her near the baseline during their game earlier this season. (Photo by Paul Gerard.)