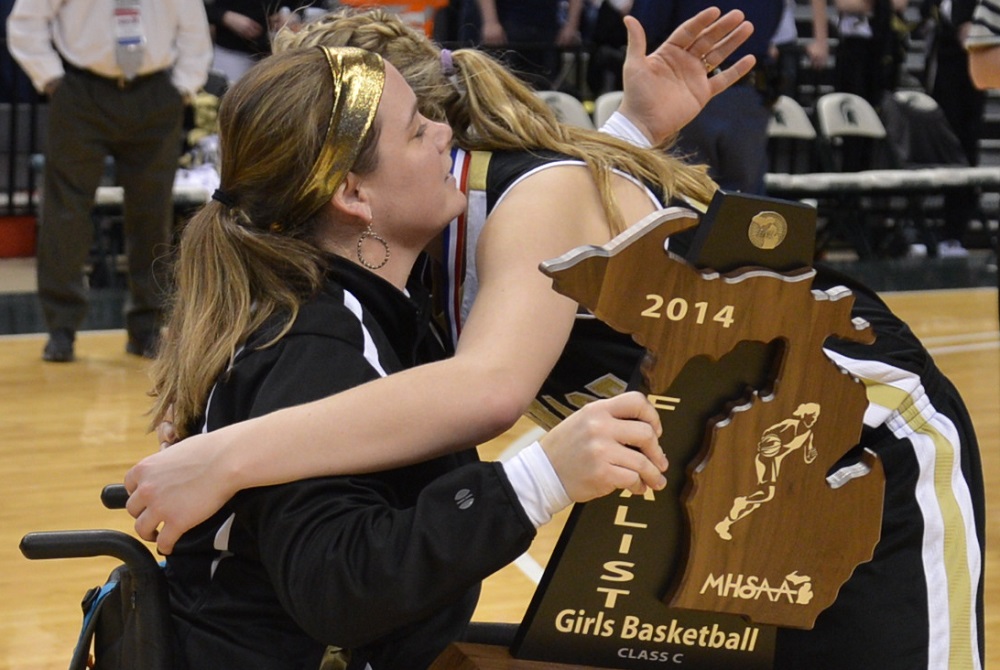 Krista Clement played for high-caliber basketball programs at St. Ignace High School and University of Michigan. Then, after a few years of teaching, she decided to start her own team.

In 2013, Clement founded Helper Helper – a digital platform that provides tracking and coordination for community service efforts across the country and counts the NCAA among partners.

At first, Clement’s team was a team of one – herself. But as she started to build the company, her thoughts turned to her high school coach Dorene Ingalls – one of the most successful team builders in MHSAA history.

“Although we aren’t playing basketball on the Helper team, so much of what I do was through what I’ve learned from Dorene’s leadership,” Clement said. “My attempt to create a culture on my team – similar to a Saints basketball team – has come from Dorene. I now find myself trying to connect with my team the way Dorene connected with me – making my teammates feel valued and inspired to put their best foot forward every day.”

Over the last 22 years, Ingalls has built one of the most respected high school basketball programs in Michigan and become one of the most successful coaches in MHSAA history. She also has been one of the state’s most impactful advocates for girls basketball, and a presence in her adopted hometown that literally earned her the title of “ambassador” from the local chamber of commerce.

To celebrate her many and continuing contributions, Ingalls has been named the 34th recipient of the MHSAA Women In Sports Leadership Award, presented annually by the MHSAA’s Representative Council to “women coaches, officials and athletic administrators affiliated with the MHSAA who show exemplary leadership capabilities and positive contributions to athletics.”

And as with Clement, those contributions continue impacting many long after graduation.

“To have the confidence to overcome when people say you can’t do something,” Ingalls said, boiling down what she’s hoped to pass on over two decades. “We still always are like the ‘Hoosiers’ coming down (to a state championship game) – we go with that flow a little bit. We’re not going under the radar too often, but usually we don’t have as many DI (college) people as the teams we play. We try to make sure (our athletes learn) that hard work, dedication, positive attitude and don’t ever give up, fight through your adversities and just keep going, keep going, keep going.

“I get letters from kids that went to boot camp that said, ‘Oh my gosh, the only way I survived this is because of our practices and our tryouts. All these other kids are stopping, and I keep going.’ … Other ones go on to be doctors and nurses in the field. That’s what it’s all about, when kids are fighting through stuff. If they have all-nighters, they can figure that out and they know they have that inner strength they haven’t tapped into yet, that willingness to keep going. I think that’s what high school sports are about – teaching them the skills they need in life, to fight through things, that you’re capable of more, you just have to sometimes dig deep, shake it off and step it on up. … It’s just kind of a thing that sticks with some of these kids, and when you see them or get invited to weddings or whatever, it has nothing to do with records or scoreboards. It’s continuing in their life, watching them have families and successes in careers – that’s when it’s fun.”

Ingalls has provided two decades of experiences on and off the court her Saints will never forget.

Through the end of this regular season, she has led the St. Ignace girls basketball varsity to a 464-80 record since taking over the program prior to the 1999 season. Her wins are the 18th-most among girls basketball coaches in MHSAA history, and she has led teams to five Finals championships and four runner-up finishes – or a championship game berth to conclude nearly half of those seasons as head coach. Her teams have reached at least the MHSAA Semifinals 11 times, and won 16 conference, 18 District and 14 Regional championships.

Ingalls also has served 20 years as a board member for the Basketball Coaches Association of Michigan (BCAM), including a three-year term as part of the executive board serving as president-elect, president and past president, and she continues to serve as chairperson of the Miss Basketball Award committee. She also has served on the MHSAA Basketball Committee.

“Dorene is someone who has been passionate for years about providing opportunities for young women,” MHSAA Executive Director Mark Uyl said. “That's easily seen in the work she's put in not just with her program but as a strong voice of leadership for the Basketball Coaches Association of Michigan. She's been one of the strongest advocates for girls basketball in our state over the last 20 years.”

There’s some necessary context behind all of those on-court win-loss numbers. St. Ignace has only about 200 students and generally plays in Division 3 (or formerly Class C) or Division 4 – yet during the regular season the Saints frequently line up games against much larger opponents from all over the state. They’ve had their share of stars, especially for such a small schools, but the success is also a testament to how Ingalls works to find specific roles for as many players as possible – whether it’s for a minute here or there to grab a rebound or get a steal, many play at least some little part in keeping the team moving forward.

And the memories made off the court have meant just as much, if not more.

Clement, who became the Upper Peninsula’s first Miss Basketball Award winner in 2003 and then a four-year captain at U-M, recalled how much she and her teammates laughed with their coach and how Ingalls has a talent for connecting with her players.

“Her record by itself could garner consideration for this award, but that is not the primary reason I write this letter,” wrote St. Ignace superintendent Don Gustafson in nominating Ingalls for the WISL Award. His daughter Linnie played for Ingalls four seasons before graduating in 2018.

“She teaches basketball, but she teaches much more than basketball. The characteristics that Dorene models for the athletes who have played under her tutelage are dedication, perseverance, teamwork and life lessons, to name a few. The players she has coached in the past stay connected with Dorene long after that graduate, as (she) continues to provide guidance and advice even after the student athlete’s playing days have concluded.”

Like many families, cancer has impacted the Ingalls – both she and her husband Doug lost their mothers to the disease when those women were only in their 50s. St. Ignace’s trips to East Lansing, or Grand Rapids to play at Calvin College, or last year to Detroit to play in the Motor City Roundball Classic, included trips to medical facilities. 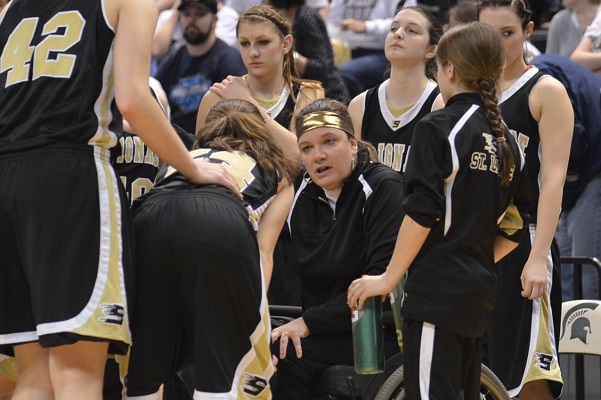 At the cancer center in East Lansing, the Saints inadvertently crossed paths with a St. Ignace resident undergoing treatment, and Dorene still is brought to tears retelling how they connected with that patient and were able to give her tickets to come watch them play that weekend. The Grand Rapids center was where Ingalls went through rehabilitation after suffering paralysis during childbirth in 2005; she remains partially paralyzed and uses a wheelchair.

Last season, before COVID-19 grounded the Saints’ chances to win another title, the team visited Karmanos Cancer Center in Detroit, including the room where one of the player’s mothers had fought for her life just a year before. That mother was part of the visit and, as Ingalls recalled, “to have that, and not the state championship, that’s probably more important. … That was pretty special. They’re learning the lessons that you’re hoping they do.”

This season’s team hasn’t enjoyed the “changing life” speeches that are part of usual bus trips, because right now the Saints aren’t taking buses to away games. But the pandemic has provided other opportunities – like when the team did workouts in the snow before full-contact practice was allowed to resume, or spent one practice performing skits for each other from the 1970s and 80s just to “break up the uncertainty and negativity.” Ingalls called it making the most of what you’ve got – and those are the memories she knows won’t be forgotten.

There has been recognition. She was inducted into the Upper Peninsula Sports Hall of Fame in 2016 and received the Michigan Sports Hall of Fame’s Treasure Award in 2017 – in addition to various Coach of the Year awards both for the Upper Peninsula and statewide over the years. She was named the Prep Person of the Year by the Detroit Free Press in 2011 and received BCAM's Tom Hursey Distinguished Service Award in 2018.

All are proud moments. But perhaps the proudest is another effort that keeps on building. Mining a connection to Lowell High School and its Pink Arrow cancer awareness games – St.  Ignace alum Nate Fowler is Lowell’s superintendent – Ingalls hatched the annual Hooping for a Cure basketball game in 2009. Cedarville, Cheboygan and Mackinaw City have joined in the fundraising game since, and the event became a doubleheader this season with the girls and boys teams both playing.

The event raised a record $35,000+ in 2020, and more than $25,000 this season despite attendance restrictions. That brought the total to more than $245,000 – funds that at first were donated to the oncology department at Mackinac Straits Hospital in part for the purchase of specialized examining tables and chemotherapy treatment infusion recliners. Once the equipment needs were met and a new hospital – Mackinac Straits Health System – was built, the money went into a No Cancer Patient Left Behind fund that provides financial support for patients who have to travel outside of the area for further treatment. 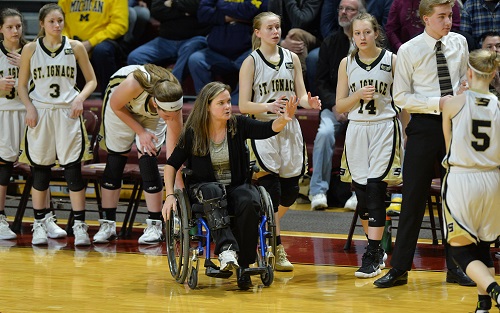 “This benefit game and ensuing experiences for the team have taught us about being grateful for every day we do have and to have the courage to fight through adversity,” Ingalls said. “These vital lessons will carry on in all of us for a lifetime.

“In fact I recently received a photo from a former player sitting in one of the infusion chairs getting treatment for an autoimmune disease that really struck me deeply. Talk about full circle.”

Ingalls is a 1986 graduate of New Baltimore Anchor Bay High School, where she played basketball, volleyball and softball. She attended Lake Superior State University, earning a bachelor’s degree in geology in 1991, and she then moved to St. Ignace to begin six years as a geologist before starting a screen printing and embroidery business.

She had earned 10 letters playing four sports at LSSU – volleyball, basketball, softball and tennis – and soon after moving to St. Ignace she joined the Saints’ coaching ranks, first as a junior high and assistant junior varsity basketball coach in 1992-93, then junior varsity girls head coach from 1994-98 until she took over the varsity position. She also has coached softball and subvarsity boys basketball.

Ingalls and husband Doug have two sons, Jackson and Jonathan.

The first Women In Sports Leadership Award was presented in 1990.

PHOTOS: (Top) St. Ignace girls basketball coach Dorene Ingalls embraces one of her players after their team finished Class C runner-up in 2014. (Middle) Ingalls talks things over with her team during a game at the Breslin Center. (Below) Ingalls coaches her team during a Semifinal win at Calvin College's Van Noord Arena in 2019.