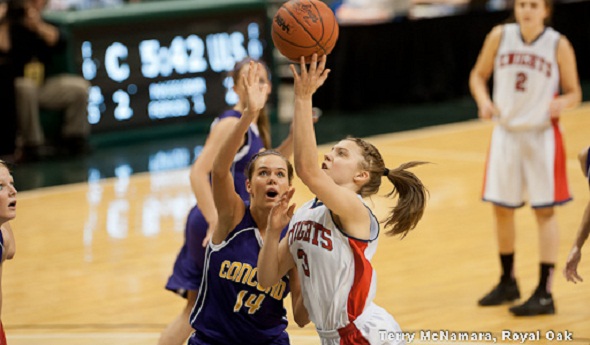 EAST LANSING – Grosse Pointe Woods University Liggett is the only Class C Semifinalist that didn’t bring a perfect record to the Breslin Center on Thursday. The No. 9-ranked Knights have lost four times, including in their final game before the start of the District tournament.

But a loss to end 2011 pushed the Knights through those momentary disappointments and back into the season’s final day for the second year in a row.

University Liggett finished Class C runner-up a year ago in its first MHSAA Final appearance. But the Knights now need just one more win to finish a year-long quest for their championship.

They earned that opportunity with a 49-27 win over No. 2 Concord in the day's first Semifinal.

“Last year we lost and it was pretty heart-breaking. Everyone was pretty upset. But throughout the course of the year it motivated us because we wanted to be here as bad as anything,” said senior guard Madison Ristovski, who was named the state’s Miss Basketball on Monday.

“So yeah, we feel pressure. But at the same time, we want it so bad that it overrides it.”

Ristovski, who has signed with the University of Michigan, is arguably the best-known player at Breslin this weekend – and the regular catalyst for the Knights over the last few seasons.

She made her first 3-pointer with the Knights trailing by five points seven minutes into the game. But she finished with six 3-pointers – and 22 points, 12 above her average – along with four steals.

"We just tried to pick it up," Haleigh Ristovski said. "Once I hit the first one, I knew I was going to make more. I just felt it.”

Along with freshman sister Lola, the Ristovskis scored University Liggett’s first 37 points before junior Julie DeRoo scored with 1:30 to go in the third quarter. Madison Ristovski finished with 15 points, six rebounds and seven assists and Lola had six steals.

The teams were tied after the first quarter, but the Knights built a 30-17 lead by the end of the second.

"Sometimes in our games, we start off a little slow. It takes one good shot, one good block, and everybody looks at each other and says, 'All right, now it's time. Let's go,'" Madison Ristovski said. "I'm not going to lie. We were probably a little nervous coming out. But as soon as Haleigh knocked down that first 3, it was like 'All right, here it is. Let's go.'

"It's not the first time she's done that. I've seen her hit seven, eight before."

They are two of eight juniors who will work to get back to Breslin next season. The Yellow Jackets started four juniors Thursday, and had only three seniors on the roster.

"I'd say that we got a lot farther than we thought (we would)," Brigham said. "We set our minds to get here, and I think it was just a great experience to play here."

Click for the box score. Watch the game and both teams' postgame press conferences at MHSAA.tv.