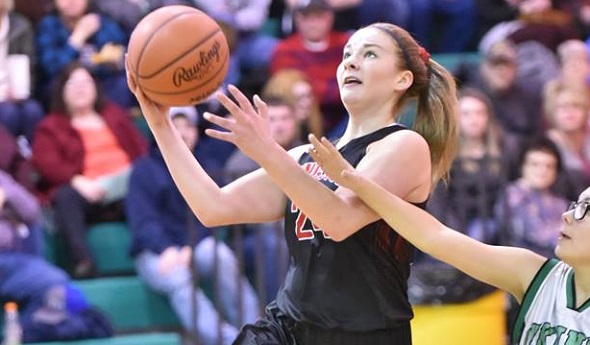 The clock is ticking as the Countdown to Calvin will be over by the time this evening is done.

All 16 Girls Basketball Quarterfinals will played at sites all over the state tonight, with winners advancing to Van Noord Arena and Semifinals beginning Thursday in Divisions 3 and 4.

Our final “Countdown to Calvin” report of 2018-19 – powered by MI Student Aid – takes a glance at all 16 Quarterfinals, which tip off at 7 p.m. unless noted. All Quarterfinals will be broadcast and viewable with subscription on MHSAA.tv. Come back Wednesday night for a more in-depth look at our 16 finalists as they head into this weekend.

Reigning Class A champion Heritage avenged a league title-deciding loss to Midland Dow with a 15-point win in the Regional Final, and a heralded group of seniors – Miss Basketball Award runner-up Moira Joiner (18.8 points per game), Shine Strickland-Gills (12.8) and Mallory McCartney (10.5) – are leading the repeat charge. Hartland is the power on the rise – the Eagles don’t have a senior starter. Junior Whitney Sollom (10.9 ppg, 8.6 rebounds per game) leads a balanced attack. Heritage won their Dec. 11 meeting 55-35.

There may not be a more balanced team left in the playoffs than Bedford, as no player averages more than 7.8 ppg and the two leading scorers don’t even start. The team’s only in-state losses this season came by two to 19-win Ann Arbor Pioneer – avenged by a six-point victory – and by one to 15-win Saline, avenged by 10 points in the rematch. Wayne is back after making the Semifinals a year ago, and its only losses this season were both to Division 2 favorite Detroit Edison. Senior guard Jeanae Terry, a University of Illinois recruit, leads an experienced group looking to take the final steps.

Only an early two-point loss to Heritage has kept Southfield A&T from a perfect run so far. The Warriors, semifinalists two years ago, boast a dangerous 1-2 punch of senior Alexis Johnson (19.2 ppg) and junior Cheyenne McEvans (17.1 ppg). Lakeview can win 20 games for the third straight season and is coming off its first Regional championship in this sport. The Huskies avenged one of their defeats in downing Fraser in the District Final.

The Big Reds are repeat Regional champions and looking to take the next step as Miss Basketball finalist Alyza Winston (24.5 ppg) finishes her high school career. Muskegon has won 16 straight on the court and avenged its opening-night loss to East Kentwood in the Regional Semifinal. DeWitt has won at least 21 games the last three seasons and four of the last five, breaking through for its first Regional title since finishing Class A runner-up in 2015. Senior Annie McIntosh (14.8 ppg) has helped set pace for the Panthers, who have two losses by a combined eight points to rivals East Lansing and St. Johns – and avenged both.

Freeland is coming off its third straight Regional title to set up this rematch of a 2017 Quarterfinal won by the Falcons. Junior Kadyn Blanchard (14.9 ppg) leads three players scoring in double figures for a team that has won 18 straight and lost only to Division 1 Heritage and Dow. Cadillac won the Big North Conference title by a wide margin on the way to its second Regional title. Sophomore guard Molly Anderson (16 ppg) also leads three scoring in double digits.

Somewhat quietly, Hamilton is a combined 71-6 over the last three seasons with two straight Regional titles. The Hawkeyes will try to follow last year’s first-ever Quarterfinal berth with a first trip to the Semifinals, and beat South Christian 62-42 in their season opener. Sophomore 6-foot-2 center AJ Ediger leads at 20.2 ppg. The Sailors have rebounded from a 2-5 start and upset Muskegon Oakridge in the Regional Final. Senior guard Sydney Cleary (12.3 ppg) leads a balanced lineup.

Chelsea has reached the Quarterfinals for the first time, its only loss by two to Division 1 Ann Arbor Pioneer in the regular-season finale. Haslett has won 13 of its last 15 and avenged two losses to Williamston and one to Jackson Northwest by eliminating both during the postseason. Both teams have one player scoring in double digits – for Chelsea, senior guard Abigale Fullerton leads at 11.6 ppg, while senior guard Ella McKinney paces Haslett at 13.7 ppg.

Westwood is making its first Quarterfinal appearance since 2008; Lake City is making its first since 1976. The Patriots’ only loss came to rival Negaunee and has been avenged twice. Junior guards Madelyn Koski (15.8 ppg) and Tessa Leece (15.2) make up a strong backcourt. After finishing second to Manton in the Highland Conference, Lake City hasn’t had a playoff game closer than 14 points. Junior forward Rylie Bisballe (16.8 ppg) leads three averaging double-digit scoring.

Hamady is back for its seventh Quarterfinal this decade after missing the final week last season. All of the Hawks’ losses were to Division 1 and 2 teams, including one to Goodrich (noted above), and they handed Hemlock its only loss this season in winning the Regional Final. Shrine is making its first Quarterfinal appearance since 1995 after winning league regular-season and tournament titles and beating two league champs in last week’s Regional. Senior guard Grace Murray leads at 15 ppg.

Madison is riding high from its first Regional championship, with only a four-point loss to 15-win Manchester keeping it from perfection so far this winter. Center Laura Teunion-Smith (13 ppg, 12 rpg) is one of four senior starters who have contributed to this historic run. Arbor Prep has made six straight Quarterfinals and is seeking to make its fifth straight Semifinal. Freshman Mya Petticord has stepped in big this winter at 19.3 ppg and 3.3 assists per game.

The Pirates, the 2017 Class C runners-up and 2018 semifinalists, also have lost only to Edison this season as they seek their first championship. Junior forward Hannah Spitzley and junior guard Ellie Droste are the leading scorers, both at 13.9 ppg. Brandywine won its seventh Regional title this decade and first since 2016, with losses only to Division 2 Comstock. Junior guard Zakiyyah Abdullah leads at 14.1 ppg.

St. Ignace has made the Quarterfinals every season this decade and is seeking to return to the Semifinals for the first time since 2015. Senior 6-foot forward Emily Coveyou scores 22.9 points and grabs 10.2 rebounds per game for a team that has won all five of its postseason matchups by at least 42 points. Baraga steps in coming off its first Regional title since 1993 and with a win over 2018 Class D runner-up Chassell along the way. Five of the team’s seven players are underclassmen, with sophomore Rylie Koskinen (11.2 ppg) and senior Martina Jahfetson (11 ppg) leading the way.

Kingston is playing in its fourth Quarterfinal in five seasons and again seeking to make the Semifinals for the first time. Senior Lily Lyons (11.2 ppg) is the lead scorer for a team that has fallen only to Division 1 Utica Eisenhower and Oxford. Everest Collegiate also is seeking its first Semifinal berth and has made it this far once before, in 2014. The Mountaineers are paced by 6-0 senior center Katelyn Allen (15 ppg, 11.1 rpg).

After winning its fifth Regional title this decade, St. Mary is looking to reach the Semifinals for the first time since 2002. The Snowbirds’ only losses were to Division 2 Escanaba and Division 3 Traverse City St. Francis. Senior guard Livee Jeffers leads at 14.4 ppg. Fowler is in its first Quarterfinal and seeking its first Semifinal both since finishing Class D runner-up in 1999. The Eagles, playing in the same league as Pewamo-Westphalia among a group of strong teams from larger schools, are paced by freshman guard Mia Riley (11.7 ppg) and sophomore guard Sarah Veale (11.3).

PHOTO: Kingston's Hannah James goes to the basket against Akron-Fairgrove in a Division 4 District Semifinal win. (Click for more from Varsity Monthly.)