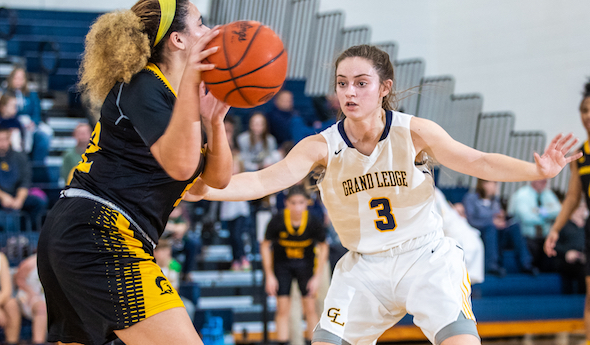 The new year brings with it endless possibilities – and that extends to this Michigan high school girls basketball season.

Sure, there are some teams looking absolutely unbeatable right now – see Detroit Edison below for a closer look at arguably the best. But we have more than two months to find out and figure out a lot more as we shift over these next few weeks to league play for most and the start of the midseason grind for all of this season’s hopefuls.

Countdown to Calvin is powered by MI Student Aid and based on results and schedules posted for each school at MHSAA.com. To offer corrections or fill in scores we’re missing, email me at Geoff@mhsaa.com.

4. St. Ignace 63, Reese 59 (OT) – The unbeaten Saints needed extra time at the Motor City Roundball Classic to hand Reese its only loss, then two days later did the same to Detroit Mumford 55-53.

5. Eaton Rapids 44, Jackson Northwest 41 – The Greyhounds remain a game below .500, but can claim the only defeat this season of the reigning Class B runner-up Mounties.

• Grosse Pointe North (5-1) – A Class A semifinalist last season, Grosse Pointe North is the likely favorite in a Macomb Area Conference Red that is always among the state’s strongest leagues and this winter is made up of six teams that are all at least 5-2 to this point. Michigan State signee Julia Ayrault leads a group which has lost only to undefeated Bloomfield Hills Marian.

• Royal Oak (7-0) – The Ravens are building well on last season’s 19-3 run and shared Oakland Activities Association White title. Royal Oak is playing in the Red this winter and hoping to unseat reigning co-champions Clarkston and Southfield Arts & Technology. The Ravens already have avenged last season’s loss to the Wolves.

• Grand Rapids West Catholic (6-1) – The Falcons are unbeaten since falling to Traverse City West by five on opening night, and only one win away from matching last season’s 7-14 success. Among the most impressive wins is a 53-41 defeat of 2018 Class D semifinalist Mount Pleasant Sacred Heart at the Muskegon Holiday Classic, which remains the Irish’s only loss.

• Detroit Edison (9-1) – The reigning Class C champion opted up to Division 2 with its star power back from last season, and is one of two programs statewide (girls or boys) fielding two varsities. The “A” team – led by Mississippi State signee Rickea Jackson – has wins over reigning Class B champion Detroit Country Day and 2018 Class A semifinalist Wayne Memorial, with its only loss to also-nationally renowned Columbus Africentric (Ohio).

• Schoolcraft (6-0) – The Eagles have won all of their games by at least 11 points, including in handing Delton Kellogg its only defeat. Those two are among the top three in the Southwestern Athletic Conference Valley standings as Schoolcraft looks to build off last season’s title and run to the Class C Quarterfinals.

• Stockbridge (5-1) – The Panthers are early leaders in the Greater Lansing Activities Conference, a near-complete turnaround after winning five games total a year ago. The only defeat this winter came to Eaton Rapids (see above), and they entered break with a 10-point win over frequent league contender Olivet.

• Rogers City (5-1) – We highlighted Onaway earlier this season, so we’ll waste no time recognizing Rogers City coming off Friday’s 46-40 overtime win over the Cardinals. The Hurons’ only loss was by two to Division 2 Tawas in the season opener, and they also have a win over Hillman after finishing second to the Tigers in the North Star League Big Dipper last season.

• Ontonagon (6-0) – The Gladiators have a jump on surpassing last season’s 12-11 finish and should make another run at first in the Porcupine Mountain division of the Copper Mountain Conference after finishing second a year ago. A 48-40 win over reigning Class D runner-up Chassell on Dec. 18 avenged last season’s 15-point District Final loss.

Tuesday – Southfield Arts & Technology (6-1) at Detroit Country Day (4-3) – The Warriors’ only loss was by two to reigning Class A champ Saginaw Heritage, and they can make a statement with a victory over last season’s Class B winner.

Tuesday – Utica Eisenhower (6-0) at Grosse Pointe North (5-1) – They played in different leagues last season and combined for 39 wins. Now they’re together in the previously-mentioned MAC Red.

Wednesday – Flint Carman-Ainsworth (7-2) at Saginaw Heritage (6-0) – These are the early leaders in the respective Saginaw Valley League divisions after Heritage came in first and Carman-Ainsworth second in a combined league a year ago. They also went on to meet in the Regional Final.

Friday – Detroit Edison (9-1) at Muskegon (3-2) – The Big Reds will be up to the challenge; their losses this winter were by a combined four points to Division 1 contenders East Kentwood and East Lansing.

PHOTO: Grand Ledge, here playing Lansing Waverly in December, will attempt to hand rival East Lansing its first defeat of the season this week. (Click to see more from HighSchoolSportsScene.com.)