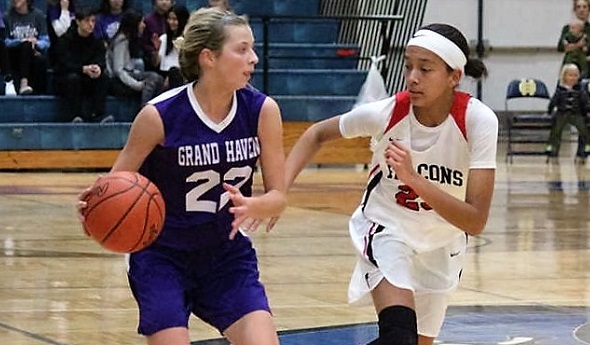 Picking the five most impactful girls basketball results from last week was a challenge.

Picking this week’s most intriguing five next Monday could prove even tougher.

A great set of matchups is coming Michigan’s way this week as schedules reach a halfway point for most teams. None may pack the boom of the first in our “Week in Review” below, but plenty more will resonate through league standings and state polls.

Countdown to Calvin is powered by MI Student Aid and based on results and schedules posted for each school at MHSAA.com. To offer corrections or help us fill in missing scores, email me at Geoff@mhsaa.com.

1. Ann Arbor Huron 46, Ypsilanti Arbor Prep 36 – Might Huron be the state’s best team regardless of class? This result combined with the next two below start the discussion.

2. Ypsilanti Arbor Prep 54, Detroit Edison Public School Academy 49 – Reigning Class C champ DEPSA was building a reputation as that top team in the state, until Arbor Prep battled back from the Huron trip-up. But DEPSA did hand Huron its only loss.

3. East Kentwood 52, Caledonia 45 – The reigning Class A runner-up keeps impressing as it remains undefeated, this time handing Caledonia its first loss of the season (and week; the Fighting Scots then fell Friday to Hudsonville as well).

4. Negaunee 59, Marquette 45 – These are two of the best from the Upper Peninsula, and now the Miners are contending perhaps only with St. Ignace for the title after handing the Redettes their first loss this season.

Jenison (7-3) – The Wildcats are sitting in the middle of the Ottawa-Kent Conference Black, for now. They are quite close to equaling last season’s 10-13 success already this winter. Jenison earned a 45-40 win over O-K White leader Lowell last week and followed that up with an impressive 43-30 victory over Muskegon Reeths-Puffer, last season’s league runner-up.

Macomb Dakota (8-1) – The Cougars are sitting alone atop a Macomb Area Conference Red that again looks like one of the toughest leagues in the state. Dakota got there last week by handing reigning league champion Warren Cousino a nine-point defeat and improved Romeo a five-point loss. The Cougars have fallen only to Ann Arbor Huron.

Chelsea (9-1) – The Bulldogs are in first place in the Southeastern Conference White after finishing second both of the last two seasons, and they are only a three-point loss to annual power Marshall from a perfect first half. Chelsea hasn’t played Tecumseh – which also hasn’t lost in the SEC White – but their first matchup is set for Jan. 23.

Comstock (9-1) – Comstock is undefeated through the first round of Berrien-Cass-St. Joseph Conference Red games, with its only loss to Class A Richland Gull Lake. The run has included a 19-point win over Buchanan, with which the Colts shared last season’s championship, and an early 22-pointer over second-place Niles Brandywine – which remains Brandywine’s only defeat.

Kent City (8-2) – The Eagles moved into first place alone in the Central State Activities Association Silver with Friday’s 59-43 win over Morley Stanwood and have won outright or shared the league title the last three seasons. The two losses were good tests, in the opener against Class A Rockford and then by a point to Class B Comstock Park. No other opponent has come within single digits.

Traverse City St. Francis (5-1) – The Gladiators have won or shared the Lake Michigan Conference championship every season this decade, four times splitting it with Kalkaska. But a 49-46 win over Kalkaska on Friday put St. Francis a half-game ahead of Charlevoix and in first alone for now, and its only loss was in the opener to still-undefeated Maple City Glen Lake.

McBain Northern Michigan Christian (5-2) – Generally a dweller in the middle of the Highland Conference standings, NMC is making itself at home on top as the first half of the league schedule draws to a close. The Comets beat reigning champion Leroy Pine River by 30 last week and have handed second-place Manton its only league loss while also just falling to Class C Grand Rapids Covenant Christian (8-2).

Munising (7-1) – Despite graduating valuable veterans from last season’s 20-1 team, Munising is back in the mix. Last week’s 56-52 win over second-place Bark River-Harris has the Mustangs sitting in first place in the Skyline Central Conference’s Large School division. The lone trip-up came to Class C Gwinn.

Tuesday – Flushing (7-2) at Fenton (6-3) – The reigning Class A champion Raiders have rattled off seven straight wins after opening with a pair of defeats, but second-place Fenton would love to move into a first-place tie in the Flint Metro League by breaking the streak.

Wednesday – Gaylord St. Mary (7-1) at Bellaire (9-1) – Revenge surely is on the Eagles’ minds as St. Mary beat Bellaire twice to win the Ski Valley Conference title last season and a third time in the District.

Friday – East Kentwood (10-1) at Hudsonville (9-1) – These two are the only two left undefeated in O-K Red play after only a handful of games and also met in last season’s Regional Final as the Falcons advanced.

Friday – Okemos (7-2) at East Lansing (9-0) – Both are 5-0 in the Capital Area Activities Conference Blue, with the Chiefs surely anticipating this matchup to show they belong in the conversation with a strong group of Lansing-area Class A teams.

Friday – Maple City Glen Lake (9-0) at Kingsley (8-0) – These are shaping up as the two best in the Northwest Conference again this season after a Glen Lake sweep of Kingsley gave the Lakers the title over the Stags a year ago.

PHOTOS: East Kentwood contained Grand Haven for a 51-47 win earlier this month, its closest of 10 victories this season. (Photo courtesy of the Grand Haven Tribune.)