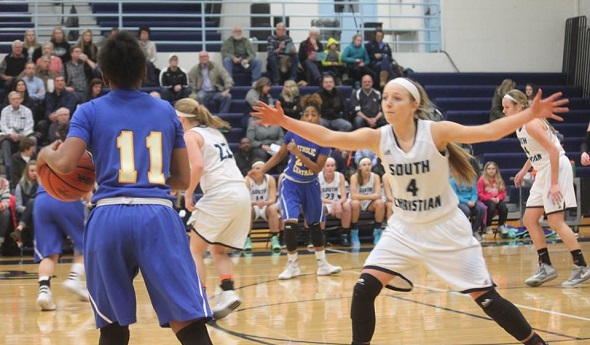 CUTLERVILLE – Jenn DeBoer remembers the thrill of playing in the MHSAA Class B Final when she was a sophomore.

The South Christian standout would like nothing better than to revisit that feeling in her final season.

DeBoer, a 5-foot-7 point guard, is currently leading the Sailors toward what they hope is another extended postseason run.

South Christian is 16-1 with three games remaining in the regular season before Districts tip off in March.

“That was a lot of fun, and obviously it was different because I was a sophomore and I knew that I had two more years after that,” DeBoer said. “But this year it’s a big goal for all of us seniors. We’ve talked about how we want to get back there and end our senior season strong.”

Led by DeBoer and a cast of veteran senior teammates, the Sailors have displayed the potential to make some noise in the MHSAA tournament.

They’re seeking an Ottawa-Kent Conference Gold title and currently own a perfect 7-0 mark in league play. Their championship hopes hinge on upcoming showdowns with Wayland and Grand Rapids Catholic Central.

“It’s been a blast so far,” DeBoer said. “I couldn’t ask for a better senior season. Our team chemistry is so amazing, and the other seniors and I get along so well. Obviously, winning has been fun too, and it’s probably one of the best teams I’ve been on.”

DeBoer, a four-year varsity player who committed to Division II Grand Valley State University before her junior season, has been the floor general of this year’s squad.

She has contributed in every aspect of the game, averaging 16.8 points, 6.0 assists, 4.6 rebounds and 3.8 steals per contest.

First-year South Christian coach Kim Legge has watched DeBoer improve and mature throughout the past years.

“She has made strides because of her work ethic, and she always wants to learn,” said Legge, a longtime assistant under recently-retired coach Jim DeBruyn.

“She’s like a sponge, and she’s been to a point guard camp the past two summers. That has really helped with her decision-making and leadership skills.”

During a recent win over Hastings, she set a new mark for career 3-pointers that had stood since 2003 while also surpassing the single-season record.

DeBoer toppled Leah Pettinga’s career record of 93 3-pointers made. She currently has 45 on the season. 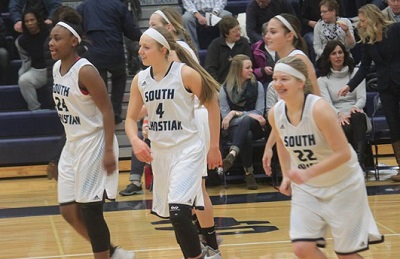 “It’s a huge honor to have the record now,” DeBoer said. “I knew I was pretty close because I focus on shooting 3s. It’s my favorite thing to do, and that’s just what I do. I wasn’t sure if I would ever make it, so it is definitely really cool to know that I have the record now.”

Legge didn’t know DeBoer was approaching the milestone until a few weeks ago, but she wasn’t surprised by the accomplishment.

“Anything that girl puts her mind to she seems to get done,” Legge said. “I got clued in a couple games before that she was getting close, but she would have never said anything to me. That’s how she is. She is so humble. It was a goal of hers, but it never would’ve come out of her mouth.”

DeBoer said the transition from DeBruyn to Legge wasn’t a difficult one.

“They both have similar coaching styles, but coach Legge is a lot more centered on defense so our defense this year has really picked up,” she said. “We have done a lot of the same things we’ve been doing in the past.”

DeBoer’s early commitment to the Lakers has allowed her to enjoy a stress-free final two seasons. It’s allowed her to focus strictly on helping her team succeed instead of lamenting over which college to choose.

“The pressure has been off, and I’ve been able to focus on my last basketball season at South,” DeBoer said. “The last four years have gone by pretty fast, and it doesn’t feel like I’m a senior until I think about it and look at old pictures. In a couple months I will be graduating, but I’m trying to enjoy high school while I’m still here.”

DeBoer is anticipating the jump to college, but is committed to ending her career on a high note.

“I’m definitely looking forward to playing in college next year, but I would really like to have a good ending to this season,” DeBoer said. “If we keep working hard, then I think we will do pretty well in the postseason.”

Legge isn’t one to look ahead, but with a starting line-up consisting of all seniors, expectations are high for the remainder of the season.

“We have a hard road ahead of us the last week of conference (play) and I don’t feel like we have peaked,” she said. “I really focus on what my team needs to do to grow on a day-to-day basis. Every coach in the state hopes their team makes a tournament run, and at this point of the season, it’s a goal of ours.”

PHOTOS: (Top) Grand Rapids South Christian's Jenn DeBoer defends against Grand Rapids Catholic Central earlier this season. (Middle) DeBoer, 4, is one of a cast of experienced teammates hoping to finish with another Finals run; she takes the floor with Markayla Vander (24) and Sydney DeYoung (22). (Photos by Tracy DeYoung.)