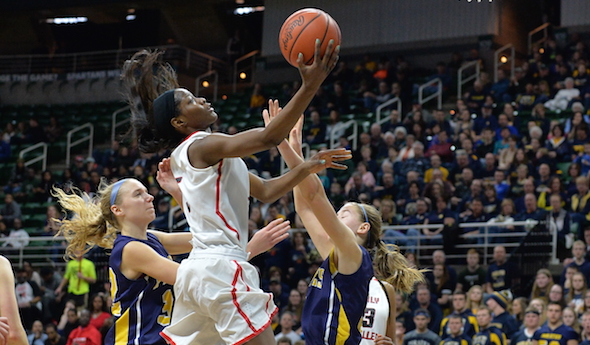 EAST LANSING – Rickea Jackson was the freshman last year, an all-stater in the making, but also the player getting triple teamed by opponents as the most immensely talented of Detroit Edison Public School Academy’s lineup.

On the sideline, coach Monique Brown almost couldn’t watch as her star kept getting “smashed” by opponents. But Jackson wouldn’t let her get down.

“I’d be looking to the side, and she said, ‘Coach, next year,’” Brown recalled Saturday after their season ended in a way neither could have fully expected. “She knew she had eighth graders who were going to be ninth graders who would be able to help her out.”

A program that had never won a District title before this winter won this season’s Class C championship edging Pewamo-Westphalia 46-44 with freshmen combining to score half of those points to follow Jackson’s game-high 21.

“Our dream has finally come true,” Jackson said. “(Coach) would get frustrated on the sideline. But when I was hugging her (Saturday), I told her, ‘I’ve got you, and I will always have your back – no matter what.’”

DEPSA finished this season 21-5, and as players piled onto each other in hugs and screams on the Breslin Center floor, there was only one question left to ask:

Was this just the first of celebrations to come?

In addition to playing numerous freshmen, the Pioneers blazed this trail without a senior – paced also by two juniors to go with Jackson, the lone sophomore and an all-state second teamer this winter.

“People are saying the season is over," said DEPSA freshman Gabrielle Elliott, who made the all-state first team, “but it’s just beginning.”

For these players, yes. But the program’s beginnings were far more humble.

DEPSA’s team is six years old, and Brown has led it from the start. The Pioneers have had winning records every season, but played the first with only six players – and finished their last game that winter, a District Final, with only three on the floor.

A loss Saturday wouldn’t have made this season less successful – something Pewamo-Westphalia coach Steve Eklund also emphasized to his players as they fell into heartache after just missing on a first championship as well.

DEPSA pushed its lead to nine just more than a minute into the fourth quarter, but P-W – which trailed for all but 14 seconds of the game when the score was tied – whittled the advantage down to one point with 1:19 to play. 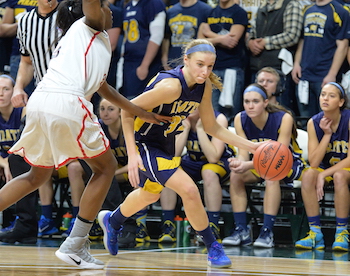 The Pioneers drained most of the clock before P-W was forced to foul, and the Pirates looked to catch a break after a missed free throw – but a scramble that saw at least three players dive to the floor ended with the ball back in DEPSA’s hands. Another P-W foul and another Pioneers missed free throw, and the Pirates got the ball back for what looked to be a final attempt to take the lead – but a 3-point attempt from the corner was enveloped by DEPSA freshman Shaulana Wagner and tossed out of bounds.

“As I was going, I was just like, don’t make them score because then we’ll be down,” said Wagner, who has been working through a left ankle injury and seemed to re-aggravate it earlier in the half. “The energy from the crowd and my team picking me up, it gave me the energy to get that.”

The Pirates had one last chance then inbounding the ball with 3.4 seconds to play – but the pass from the corner never made it safely in, knocking off the leg of a DEPSA player and then off P-W on the deflection.

“They’re long. Their arms were everywhere,” Pirates junior Emily Spitzley said. “It was just a blur."

“Five seconds after that inbounds play I told myself I should’ve run the other one. It’s amazing a whole season comes down to just five seconds,” Eklund added.

“I just told the girls no regrets. You’ll have a lot of people come up and tell you what an awesome game it was. You’re going to get tired of saying thank you, but mean it.”

P-W will continue to be a force as well, as freshman Hannah Spitzley led this time with 17 points as her all-state second-team sister Emily had 15.

Jackson added nine rebounds and three blocks to her game-high 21 points, and Wagner had 12 points and two blocks.

“It definitely started off a couple years ago with our middle school program,” Brown said. “To get them to stay with me was a little tough, so when they came over (to high school), when they decided, yes, we will continue to stay here with you and continue this roll with you, we started in August running on the track and in the weight room. We were just trying to build our bodies because I knew we would have to go against seniors going off to college.

“When they committed themselves to that, I knew we had something. But not until the 9 o’clock p.m. practices on Friday nights – then I thought we might have a championship team. And the 5 in the morning practices … everyone showed up, and I commend the ladies for that.”