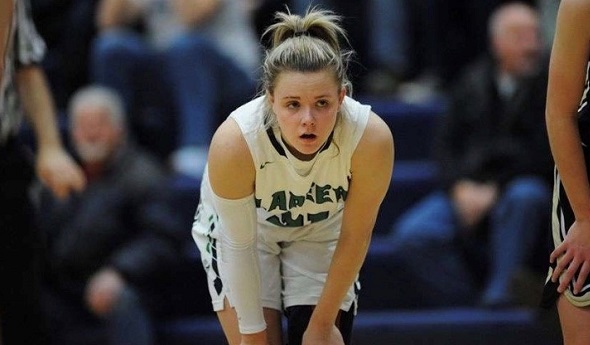 Hannah Erla was so devastated by the diagnosis, she basically stopped listening.

The Lapeer senior point guard had torn her ACL, which in her mind meant her final high school season was over after just four games. She wouldn’t be able to lead the Lightning to their first District title since her freshman year. She was done playing for coach Andrew Roberts. She would end her career about 100 points shy of 1,000.

As all this was swirling through Erla’s head, the good news came: she could still play.

“There was maybe a pause, then he said it after,” Erla said. “I was so upset, I wasn’t comprehending what he was saying.”

After Erla processed the news, her next decision was a simple one. She wouldn’t have surgery on her knee until after the season. She would wear a brace, and she would finish her high school career on the court. After talking with more doctors, getting the proper clearances and missing just two games, Erla was back in uniform leading the Lightning.

“What drives me to play is that it’s my last year of high school, and I’ll never be able to play with my friends again, or have Roberts coach me,” she said. “I just want to win a District with my team. … It was immediate. I decided right then that I was going to finish out the season and reach my goals to get 1,000 and try and win a District.”

Erla reached 1,000 points in the waning seconds of Lapeer’s game Feb. 7 against Grand Blanc. The District title is yet to be decided, and Erla still has some work to do to ensure she’s on the court to make that happen.

She has missed the Lightning’s past three games because the swelling in her knee has increased. She plans to be on the court, however, for the regular-season finale Friday at home against Bay City John Glenn, and the postseason which begins March 4 for Lapeer.

Betting against her seems unwise considering what Erla already has overcome. But either way, she’s already provided a shining example for the program.

“Hannah always wants to get into the gym,” Roberts said. “Hannah plays and works hard in the offseason. We ran a summer camp for kids, and I made sure that I stressed that she’s a four-year player because of her, because she has put this extra time in. When you have a walking, living example of that, it holds so much more water than just saying it.”

Roberts took over the Lapeer girls basketball program at the same time Erla was entering it. As a freshman, she wasn’t a starter, but she still managed to earn honorable mention all-Saginaw Valley League recognition. As a sophomore and junior, she earned first-team honors. 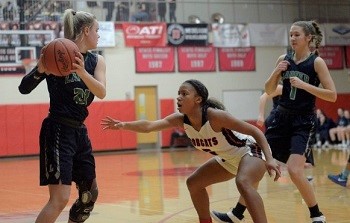 Lapeer, which was 5-13 entering Tuesday’s game against Midland Dow, started this season 3-0, with all three wins coming by double digits. It was early in the fourth game, a 41-39 loss to Davison on Dec. 13, when the Lightning lost its leader. Erla ran toward a Davison player who was bobbling the ball, but as she planted her foot and tried to turn, her knee gave out. Erla said she didn’t hear the pop that players so often recall when tearing their ACL, and she was able to walk on it. The trainer told her she couldn’t return, however.

“Our trainer went out there and knew she was done for that game,” Roberts said. “When they say they’re done, and it’s a knee issue, you tend to think the worst.”

Erla’s tear was described as straight across, and not jagged, which allowed her to get the green light to play with a brace. She returned to action Jan. 7.

“I’m happy, selfishly, to have her,” Roberts said. “But I’ve never seen it done before, so I was pretty apprehensive, because the last thing I wanted to do was hurt her. I was excited to have her, but at the same time very, very nervous. When you start talking to people, there were other situations out there, which kind of eases your mind a little bit. You have to go by what the expert says, not what I think.”

Erla had to adjust to playing with her injury, as she had lost some of her signature explosiveness. Roberts said her strength as a shooter became more prominent.

“I just let things come more naturally rather than before when I tried to do most of the work,” she said. “This time, I just waited for my shot. At first, it was (frustrating) because I wasn’t expecting it. I was expecting to play how it used to be, but then I adjusted and I wasn’t frustrated anymore.”

In 14 games this season, Erla is averaging 12.6 points, three rebounds and 1.2 steals per game. She is also shooting 80 percent from the free throw line.

One of those free throws earned Erla her 1,000th point one month after she returned to action. She said the moment was made more special because of what she had to endure to get there.

After the season ends, and after spring break, Erla said she will have her surgery in early spring. She is still hoping to play basketball at the next level, and Roberts said she has been in contact with several NAIA programs. The most important quality Erla, who holds a 4.1 GPA, said she is looking for is a good engineering program.

Roberts says that whoever signs Erla will be bringing in a great asset.

“I would sign her because right now, she needs to score in high school for us to be successful,” he said. “It might take a year or so, but when you develop her into more of a point guard, you’re going to have a guard who can break a defender down and get into the paint – that's what she does. A healthy Hannah can get into the key at will.”