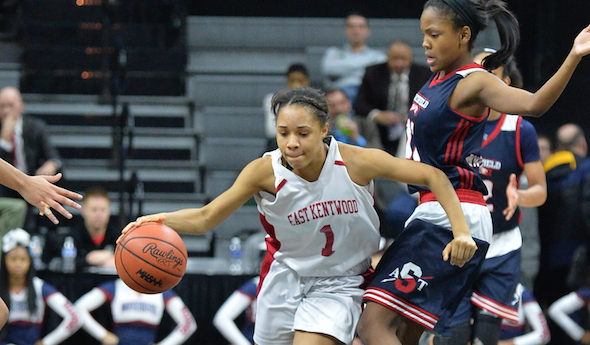 EAST LANSING – Few opponents this season had played East Kentwood as close as Southfield Arts & Technology did during Friday’s Class A Semifinal at the Breslin Center.

But Falcons coach Jimmy Carter wasn’t worried. And his players were only a little bit cautious as they set themselves up to play for the school’s first MHSAA basketball title.

East Kentwood led by as many as 20 and by 11 into the final quarter. But although Southfield A&T cut the deficit all the way to two points with 4:45 to play, the Falcons held on for a 55-51 win to earn their first championship game berth.

They’ve claimed 22 of their 26 wins this season by 12 or more points, so their experience in close games is limited.

“It may sound a little conceited, but I thought we were underrated all year. We weren’t even ranked in our own area, so we had something to prove that we’re better than what people think. I really like being the underdog, and I think my kids do too.”

East Kentwood, ranked No. 9 in Class A heading into the postseason, will face unranked Flushing in Saturday’s noon championship game. Neither has won an MHSAA championship or played for one.

But the Falcons have been building to this point. East Kentwood won one game in 2012-13, but since have increased that victory total to seven, 11, then 14, and this season sit 26-1 with that only loss in its second game to Grand Rapids Catholic Central.

Moving on Friday seemed all but a done deal after the Falcons’ lead reached 20 with 3:47 to go in the third quarter. But No. 6 Southfield A&T – which beat top-ranked Detroit Martin Luther King on the way to the Semifinals – wasn’t about to go that quietly. 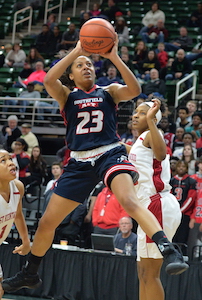 The Warriors – a product of the merger between the former Southfield High and Southfield-Lathrup in the fall – launched a 15-0 run with Miss Basketball finalist Deja Church scoring 10 of her game-high 26 points to lead the way. A Church basket with 4:45 to play pulled A&T to within 44-42.

“In the locker room (at halftime), we went in there, and basically I just started (saying) the game isn’t over. We were down 15 points. That’s nothing,” Church said. “So we just tried to shake off the first half, and the third quarter we came out playing really hard, cut the lead down to four or two, and at that point I felt like we could get it.”

A 3-pointer by junior D’Layna Holliman put the Warriors behind only 52-49 with 1:03 to play. After East Kentwood senior Amari Brown made one of two free throw attempts, A&T had two chances to get within two. A foul put Falcons sophomore guard Mauriya Barnes on the line for two free throws with 25 seconds left – and she connected on both, pushing the lead back to six and the game out of reach.

Carter noted after that his team missed a number of layups and connected on only 9 of 24 free throws. But Barnes showed some necessary poise knocking down her pair at crunch time.

“We were confident, but we couldn’t get too cocky. We can’t ever underestimate a team, because when we do, what happens happened,” Barnes said. “We get overconfident, they make a run, and we have to really humble ourselves and we have to play our game no matter what.”

Barnes scored a team-high 16 points and grabbed six rebounds for East Kentwood, and junior center Corinne Jemison also shined in the clutch with 14 points and 13 rebounds.

Even with the loss Friday, Southfield A&T turned what could have been an awkward situation this season into an overall win. Church (Lathrup) and Holliman (Southfield High) recalled after how they didn’t care for each other much before becoming classmates and then teammates this school year. Coach Michele Marshall – who led Lathrup for 21 seasons and to the Class A title in 2005 before taking over this new program – offered lasting praise.

“D’Layna spoke about the fact that a lot of people think this is an upset that we even got here. But the thing I love about the kids I inherited from Southfield High is they play with a chip on their shoulder and they believe anything is possible,” Marshall said. “And so after we started to blend together, and we understood that we were going to be one as a team, my coaching staff and I felt we could get to Breslin.

“We fell short of the state championship, but make no mistake about it: I’m more proud of this team than probably any team I’ve coached.”