The Michigan High School Athletic Association’s Girls Basketball Semifinals and Finals weekend could return to the Breslin Student Events Center as quickly as this upcoming 2019-20 season, with Michigan State University hosting the event this winter and in future seasons when the Spartans women’s basketball team is not selected as an opening-round host for the NCAA Tournament.

Breslin hosted the Girls Basketball Semifinals and Finals from 2004-06 and 2010-17. However, the potential for a conflict with the NCAA Division I Women’s Basketball Tournament led to the MHSAA moving the event for the past two seasons. The NCAA awards top-four seeded teams an opportunity to host the first two rounds of its Division I tournament, and the NCAA event falls almost annually on the traditional dates of the MHSAA girls basketball championship weekend – setting up the possible conflict of both events being scheduled to play at Breslin at the same time.

“We are thankful for the graciousness of all parties involved to allow for this opportunity to bring the Girls Basketball Semifinals and Finals back to the Breslin Center,” MHSAA Executive Director Mark Uyl said. “From the Breslin Center staff, to coach Suzy Merchant and the MSU women’s basketball program, to MSU law enforcement, ticketing and hospitality and then Western Michigan and Hope College and their facilities people for agreeing to reserve their arenas for us in case it’s needed – this agreement happens only because of the immense cooperation by everyone involved.”

The MHSAA Girls Basketball Semifinals will be played this upcoming season March 19-20, 2020, with all four championship games March 21. The NCAA Division I Women’s Basketball Tournament’s opening weekend is March 20-23, with the bracket and seeds to be announced Monday, March 16.

The MHSAA Boys Basketball Semifinals and Finals traditionally are played at the Breslin Center the following weekend, this upcoming season March 26-28. All games for the NCAA Men’s Basketball Tournament are played at neutral sites, and there is no possible conflict between the two events.

Read Fieldhouse, home to Broncos teams including the women’s and men’s basketball programs, unveiled a new basketball court at the start of the 2015-16 season among a variety of improvements to the facility over the last five years. The MHSAA Girls Basketball Finals were played at Read from 1983-85, and WMU also hosted the MHSAA Girls Volleyball Finals from 1996 through the 2007 winter season, the last before the MHSAA season for the sport moved to the fall. 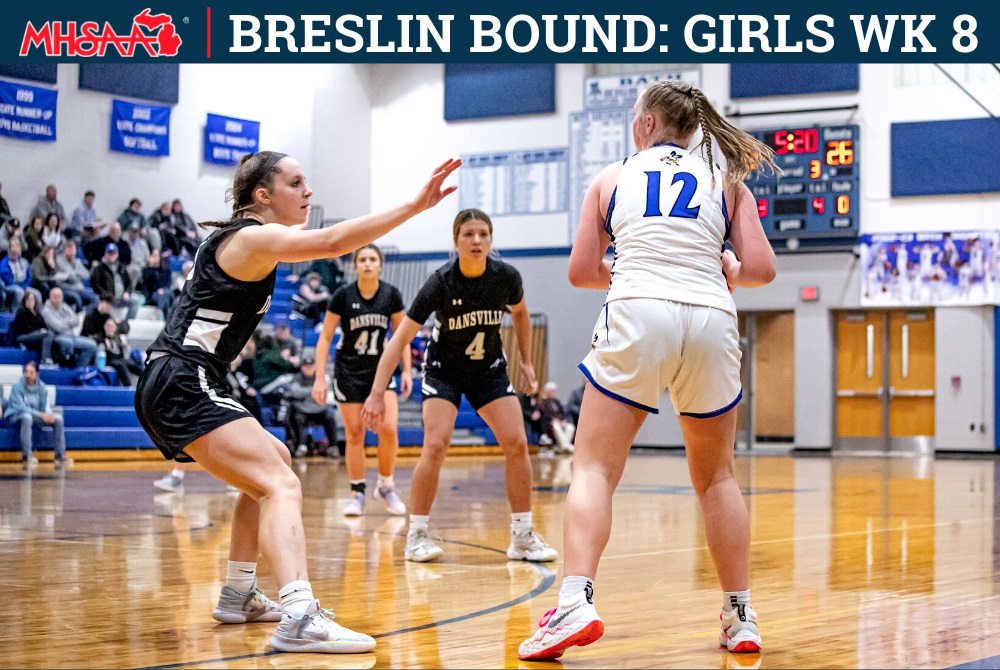 Of course, what matters most is ending the season with a win – and only four fortunate Michigan high school girls basketball teams do so every winter.

But as we cruise into the second half of this regular season, it’s notable to highlight the 18 teams that have played nearly two months without experiencing defeat.

4. Morenci 48, Petersburg Summerfield 41 Morenci (12-0) maintained an edge both locally in the Tri-County Conference and statewide in Division 4 with Summerfield (12-2) also among the elite.

5. Utica Eisenhower 47, Grosse Pointe North 46 After losing to North by 14 a month ago, Eisenhower (9-3) evened the season series with this close win over the Norsemen (11-2). 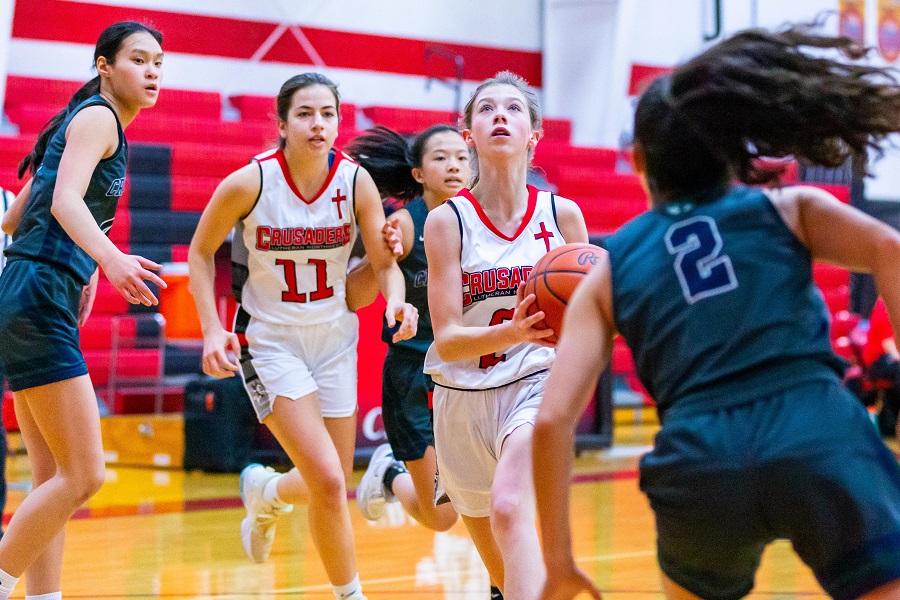 Brighton (8-3) In finishing 17-8 and fourth last season in the Kensington Lakes Activities Association West, Brighton lost twice to Howell, Northville and Brighton. In leading the conference this winter, Brighton has defeated all three plus second-place Salem by 20 points. The Bulldogs are on an eight-game winning streak after opening 0-3 with two of those losses to teams still undefeated.

Dearborn Divine Child (11-2) The Falcons opened the calendar year with a solid 63-62 win over Redford Westfield Prep, then had a brief bobble with losses to Warren Regina and Ann Arbor Father Gabriel Richard – but are right back in contention in the Detroit Catholic League Central with their first meeting with league leader Farmington Hills Mercy on Tuesday. Divine Child is coming off defeating eight-win Grosse Ile, and also has a nice victory over Salem and handed Dansville its only loss this winter.

Houghton (10-1) The Gremlins are coming off a 51-46 win over another Upper Peninsula contender in Calumet, and have won six straight since their lone defeat to West Iron County. Last season’s 18-4 finish included a split with the Copper Kings, a sweep by Hancock and a playoff loss to Negaunee. Houghton also has a win over Negaunee this season and sees Hancock for the first time Feb. 9. Six of 10 wins are against teams .500 or better, with a 14-point victory over 10-win Baraga another major highlight.

Elk Rapids (9-2) There may have been no better way to come back from a Jan. 13 loss to Traverse City St. Francis than Elk Rapids’ 51-42 win over Harbor Springs four days later, and those three teams all top the Lake Michigan Conference with one league loss apiece. Elk Rapids’ only other defeat was to Division 4 contender Maple City Glen Lake. The Elks won the LMC last season before losing to St. Francis in their District, and get the next chance to break that streak against the Gladiators on Feb. 9.

Ypsilanti Arbor Prep (6-4) The Gators always load their regular-season schedule in preparation for the postseason, and it paid off with another Division 3 title last winter. This season’s losses were to Division 2 Westfield Prep, Lake Fenton and Chelsea (two of those in overtime), and to Illinois power Chicago Butler. As noted above, Arbor Prep has defeated West Bloomfield, among four teams with double-digit wins – Tecumseh, Father Gabriel Richard and Madison Heights Bishop Foley are the others.

Gaylord St. Mary (9-2) The Snowbirds have won nine straight since opening with losses to still-undefeated Escanaba and New Lothrop. All nine of those wins have come by double digits as St. Mary has vaulted back to the top of the Ski Valley Conference after sharing the title in 2021 and winning it outright last season. Expectations should remain high again after last season’s playoff run ended in the Quarterfinals against eventual champion Fowler.

Pittsford (10-2) The Wildcats also have won nine straight, all by double digits as well, as they seek to build off last year’s 18-4 finish. The losses came early to Hudson and Sand Creek, who both have won at least eight games, and Pittsford also has avenged last season’s defeat to Athens – another eight-game winner so far this winter. Pittsford more recently defeated Hillsdale Academy, a nine-game winner, in a key Southern Central Athletic Association matchup.

Tuesday – Dearborn Divine Child (11-2) at Farmington Hills Mercy (12-0) – As noted above, this matches two of the top three in the Catholic League Central and after these two split last season’s two meetings.

Friday – Escanaba (13-0) at Calumet (9-2) – Two of the best in the Upper Peninsula face off, and they’ll actually see each other a second time Feb. 10 when both could be on their ways to league titles.

Friday – Bay City Western (11-1) at Flint Carman-Ainsworth (10-0) – These are two of three still undefeated in the Saginaw Valley League, with the only loss between them Western’s to Big North Conference contender Traverse City Central.

Friday – Temperance Bedford (12-0) at Saline (11-1) – A Saline loss last week to Grass Lake kept this from being a matchup of undefeated squads, but these two top the Southeastern Conference Red and are among the highly-regarded statewide in Division 1.