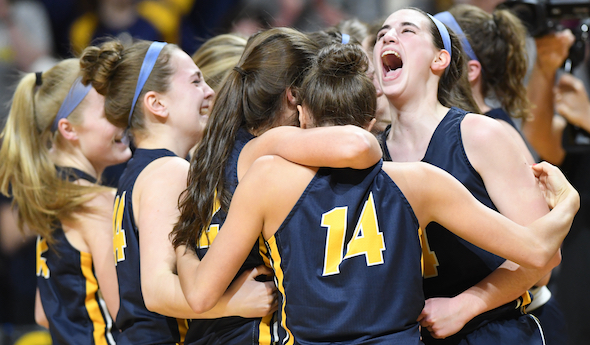 GRAND RAPIDS – The seconds couldn’t tick off the clock fast enough Saturday for a Pewamo-Westphalia girls basketball team on the verge of its first championship for the third season in a row.

Side by side on the bench, each with four fouls, sat juniors Ellie Droste and Hannah Spitzley – who together scored more than half of the Pirates’ points this winter.

On the floor, senior Rachel Huhn faced the start of the fourth quarter charged with holding things together as the only other player with significant experience from P-W’s last two tournament runs.

“Seeing those two in foul trouble, I knew especially being a senior leader, I knew my focus was just to keep everyone positive, keep everyone together,” Huhn said. “Just keep us in one unit, and stay calm.”

She also knew she was now the team’s top offensive option – but surely she didn’t anticipate knocking down the most important shot in her program’s history.

Huhn’s fourth-quarter 3-pointer with 5:31 to play was P-W’s only field only over the final 11 minutes and 13 seconds Saturday, and only points during a 9 minute, 28-second stretch that saw the Pirates lead over Flint Hamady go from 11 to one with 1:45 to play. It also ended the reason the Pirates never lost the lead as they clinched the Division 3 championship with a 40-33 victory at Van Noord Arena.

Huhn also connected on all four of her free-throw attempts over the final 32 seconds as P-W completed a run that began with a trip to the Class C Final two years ago, followed by an appearance in the Semifinals last season.

“It just feels amazing to go out this way, because everyone on this team – all 16 girls – have worked so hard for this,” Huhn said, “In the offseason we’ve done so much improving our own skills, and I just feel like we work so well together. To come close sophomore and junior year and put the cherry on top my senior year, it’s just a great feeling.”

This P-W team was the 11th to reach the season’s final week, and followed Class C runners-up also in 1983 and 1984. The Pirates finished 27-1, their only defeat to Division 2 power Detroit Edison, which had beaten P-W in the last two playoff trips.

The Pirates led all but 56 seconds Saturday. But after pushing the lead to double digits during both the second and third quarters, it took just about everything the Pirates could offer to withstand a Hamady team with a significant size advantage and a defensive press that played a big part in P-W’s 22 turnovers – with half coming during the Hawks’ 13-3 second-half run to draw within one. 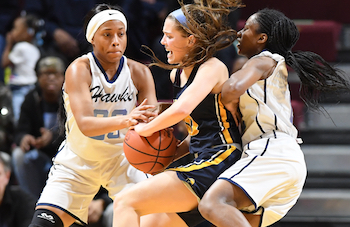 “We knew they had some speed, but we didn’t quite know how quick they were,” Hamady coach Keith Smith said. “Now that I look back at it, I probably should have brought the pressure a little earlier. But we did respect (Droste’s) play … but I think we got her a little rattled. And we were also trying to get her out of there when she got four fouls.”

As significant as navigating the pressure, the Pirates outrebounded Hamady 32-19 despite having only one player 6-foot and one more taller than 5-8. They did so with that 6-footer, Spitzley, playing 19 seconds over the last 8:49 before fouling out and six players grabbing between 4-7 rebounds apiece.

P-W had practiced playing with Spitzley or Droste fouled out – but Pirates coach Steve Eklund never anticipated that scenario becoming real-life in this game.

His players couldn’t have responded better.

Huhn’s 3-pointer was followed by Spitzley’s re-entry and then departure, and then Droste came back into the game at 3:43 to play. The teams took turns missing shots before junior guard Xeryia Tartt’s free throw pulled Hamady to within 32-31 with 1:45 to play.

The Hawks (21-6) grabbed the rebound off Tartt’s miss on the second free-throw attempt, but Droste stole the ball and was fouled trying to finish a break. She made a free throw to push the lead to two, and the Pirates followed with another stop when junior guard Emily Nurenberg ended up with the ball after Hamady lost its dribble attempting to tie the score. Droste ended up with possession, was fouled, and this time made both free throws to make the lead 35-31 with 42.5 seconds to play. The Pirates then limited the Hawks to one missed shot on three straight possessions, with Huhn twice grabbing rebounds during that shutdown stretch. They also made 8 of 10 free throws over the final 1:14.

“It wasn’t pretty, but we out-pointed them. We took care of the basketball at times, we made our free throws, and defensively we got stops,” Eklund said. “With 40 seconds left we were happy. We had the lead, we were at the free throw line, and I said, ‘Girls, I think we need three or four more stops.’ And I think we got three stops in the last 40 seconds.

Droste finished with 18 points, including 12 on free throws. Huhn had 10 points and six rebounds, and Spitzley had eight points. Junior guard Kiera Thelen scored two points but led the rebounding effort with seven.

“I just knew my teammates, the entire time, they had my back,” Droste said. “Me and Hannah both got into foul trouble, which really, it’s hard because you’re so used to being out there in tight situations. But we have such confidence in our teammates – we trust them so much that we know no matter what we can come out with the win.”

Tartt had 15 points and five of her team’s 14 steals to lead Hamady, which was playing in its first Final since finishing Class C runner-up in 2015.