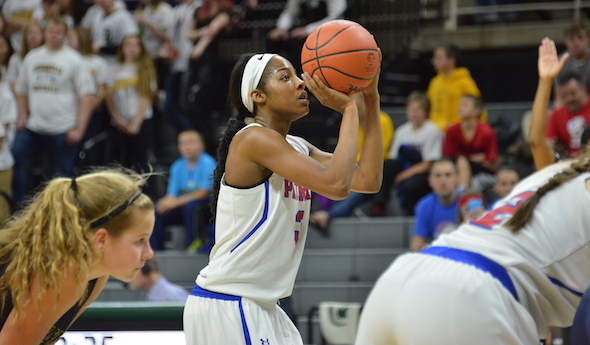 The second day of the MHSAA Girls Basketball Semifinals, presented by Sparrow Health System, produced one of the most dramatic finishes in a long time, as the field is now set for Saturday’s championship games.

Click the final score to watch the entire game and order DVDs.

Maddie On The Run - Maddie Maloney led St. Johns with 12 points, getting two here in transition.

Hard-Working Eagle - Chloe Guingrich scored a double-double for Hudsonville with 12 points and 10 rebounds.

DeBoer Putback - Jennifer DeBoer of Grand Rapids South Christian led all scorers in the Class B Semifinal game against Detroit Country Day with 18 points, including two on this putback.

Boensch For Two - Cassidy Boensch had 16 points and 12 rebounds for Bay City John Glenn in its Class B Semifinal against Marshall. Boensch later made two free throws to give her team the lead with 14 seconds to go, but Marshall scored late to prevail, 43-42.

Here’s Your Winner - With 1.4 seconds left on the clock, Marshall's Nicole Tucker hit two free throws to give her team the 43-42 win.