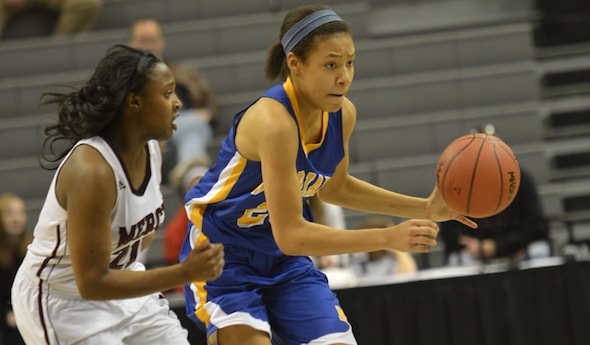 And then there’s the basketball rivalry they took up a level this winter.

They had a combined tie score of 149-149 over their first three games entering Friday’s Class A Semifinal at the Breslin Center. They split regular-season meetings, and hence, the Detroit Catholic League Central championship. Mercy won their third matchup, in the Catholic League Tournament final, but by just a point. The Marlins were ranked No. 3 at the end of the regular season, and the Mustangs were No. 5.

Those similarities are easy to point out. But it might’ve been even easier to measure how badly Marian wanted to move on to Saturday’s championship game while simultaneously ending its rival’s season.

“After that loss … we just picked each other up. From that moment on, every sprint we ran was to get back at Mercy,” Marian senior forward Laura Bruton said. “We knew we were going to meet them later on, in this game, and it just means everything. It’s been our dream to get here too, but just beating Mercy here is so much more important to us as a team than basically being here, in my opinion.”

Marian (24-2) will be in East Lansing one more day and with one more celebration in mind, thanks to a 67-55 defeat of Mercy in their fourth and final meeting of 2013-14. The Mustangs will face Canton in the noon Saturday Final.

As closely as Marian and Mercy had played each other this season – and with many of these same players over the last few – there wasn’t much left to surprise.

And that meant the Mustangs were plenty prepared for the multiple Mercy press defenses that had slowed them down, especially in their most recent meeting.

That also allowed Marian coach Mary Cicerone to predict to her team a 15-point win Friday if it found a way to break the Marlins’ pressure.

“We kept saying, ‘Here is comes,’ and it came,” Cicerone said. “We panicked a little bit, somebody traveled, somebody threw the ball away. We took a timeout and got organized. Mercy made runs; we made our runs back.” 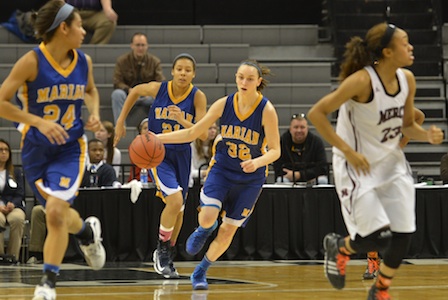 Marian did lead the final 26 minutes of the game – although that and the final score were not good indicators of the closeness of the game until the Mustangs took control for good with a 13-4 final run beginning midway through the fourth quarter.

And it certainly hurt Mercy’s effort when senior starting guard Allie Grocyca left with an injury after playing only 11 minutes, and senior Candice Leatherwood was slowed by a knee injury as well.

“I said to the kids, we got behind early and it seemed like we were trying to dig ourselves out of the hole, climb back over the mountain,” Mercy coach Gary Morris said. “Every time we’d get close, something else would happen.”

Junior guard Taylor Jones scored 15 points to lead Mercy (25-2), and Leatherwood scored 14 including the 1,000th of her four-year varsity career. Senior Tyler Parlor came off the bench with eight points and 11 rebounds

“I told my assistants I thought I’d be retired before we ever got back here,” said Cicerone, who has totaled 559 wins over 31 seasons and last led the Mustangs to an MHSAA title in 1998. “But this junior group came in, and you just can’t boot them out of the gym. … They just work and work and work. We knew we had something.”

“We’ve been definitely looking forward to this game for a long time,” Holinski added. “Not in our wildest dreams did we think we’d be able to play Mercy again after the Catholic League loss. Coming into (this) game, we were so focused, so determined to beat them. We love each other so much, and we wanted to do it for each other.”

HIGHLIGHTS: (1) Mercy tightens things up against Marian in the third quarter when Sierra LaGrande cans a 3-pointer and Taylor Jones follows with a steal and a layup. (2) Kara Holinski scores on a putback after Marian beats Mercy's pressure to start a 9-3 run midway through the third quarter.