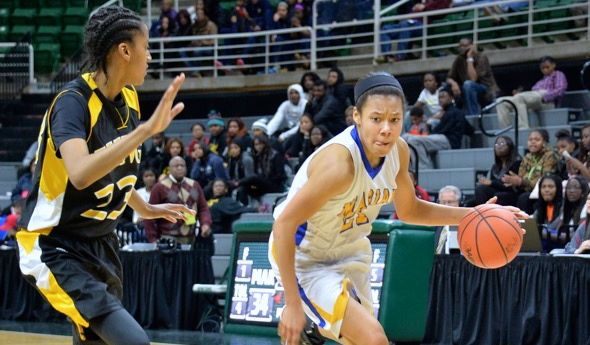 Marian didn’t see always-powerful King during its championship run. The Mustangs did win that first meeting this winter, but by only one point.

Nerves aside for their Class A Semifinal rematch, the story unfolded much differently – but with a similar ending.

Top-ranked Marian never trailed after the first five minutes and furthered its already-impressive body of work this season by downing the No. 2 Crusaders 57-37 at the Breslin Center.

“I think today we were ready for them. We actually played with confidence,” Williams said. “The last game we were nervous. We’d never played them. Today we went out and played the best we could.”

On Saturday, the Mustangs can prove for the second straight season that no other team in Class A can play better. They’ll take on DeWitt in the noon Final at Michigan State.

Marian’s surge in confidence was just one change from the first meeting. Coach Mary Cicerone made some adjustments to the Mustangs’ stingy man-to-man defense designed to make life a little harder on King senior point guard Janae Williams, who had 17 points in February.

Williams scored a game-high 18 points this time, but eight came on free throws as she had a tougher time driving to the basket against additional defensive attention.

“In this particular game, they were a little bit more aggressive,” King coach William Winfield said. “They took us out of what we wanted to do, which was good on their part. We did the same thing when we played them (the first time).

“They put a lot of pressure on my point guard, and that was it. Any time you have a situation when they take my point guard out of the game, now we have problems.”

Thomas scored with 36 seconds left in the first quarter to launch an 11-2 run that put Marian ahead 20-11 three minutes into the second. The Crusaders cut the deficit back to seven points three minutes later, but never got closer. 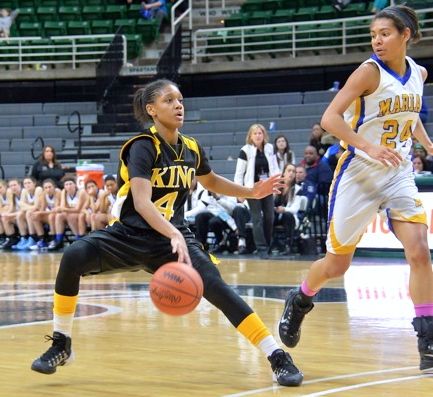 Thomas had 12 points and a game-high eight rebounds, plus three blocked shots. Senior guard Jaeda Robinson led Marian with 15 points and senior forward Brittany Gray added 14 as the team made 50 percent of its shots from the floor.

Senior center Malaysia McHenry added 12 points and eight rebounds for the Crusaders (24-2); she and Williams both were four-year varsity players for Winfield and led this first King run to the Semifinals since 2006.

Marian (25-1) is undefeated against in-state competition, its only loss to Chicago Whitney Young. The Mustangs are 50-3 over the last two seasons – and beat the team that handed them their 2013-14 losses, rival Farmington Hills Mercy, in last year’s Semifinal.

Four starters from last season’s championship game likely will be in the lineup Saturday, and Robinson was the team’s top sub a year ago.

“This is what we planned for. Nothing else would’ve been satisfactory,” Cicerone said. “I’m sure you’d see a lot of tears if we weren’t here. But they came to play today, and I’m very proud of them.”