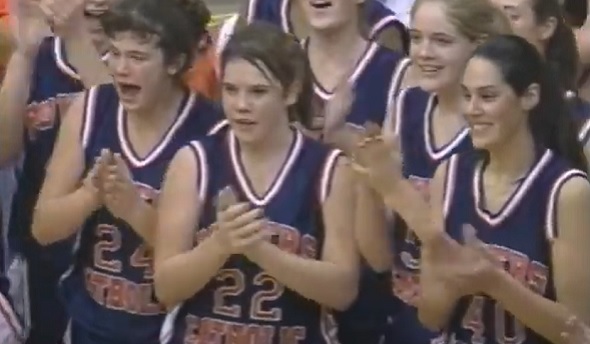 After being stung by Detroit Country Day’s fourth-quarter comeback and buzzer-beating game winner in the 1999 Class B Final, the Flint Powers Catholic girls basketball team would not offer an opportunity for the same dramatic ending in the teams’ 2000 rematch.

This time, the Chargers halted Country Day’s fourth-quarter surge a few points short, holding on for a 47-42 victory.

Senior Kelly Koerber – Powers’ leading scorer in the 1999 defeat – again set the pace, putting up 19 points while connecting on 9 of 12 shots from the floor. The Chargers actually trailed Country Day by two at halftime before going on a 15-4 third-quarter run to take a lead they wouldn’t relinquish. Koerber’s future Western Michigan teammate Carrie Moore led Country Day in scoring this time with 19 points as well.

The win gave Powers a 27-1 record for the season, its only loss coming to Flushing by a point. Powers would go on to also win the third-straight Class B Final matchup between the Chargers and Yellowjackets in 2001, 54-53, to cap a perfect 28-0 season.

Here’s the full broadcast of the 2000 Final from FOX Sports Detroit.