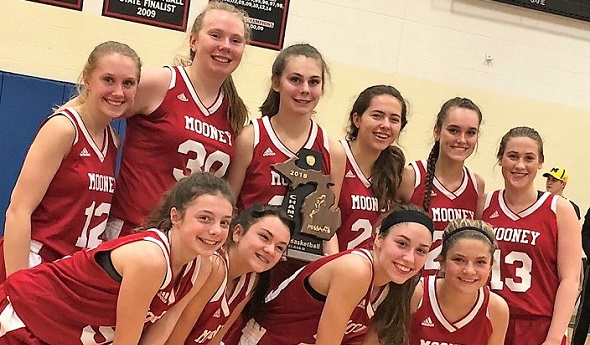 The Cardinal Mooney girls basketball season ended last week in the Regional Final with a loss to Waterford Our Lady of the Lakes.

On the surface, for a program with Mooney’s rich history in the past decade-plus, it was disappointing – especially against a longtime rival that went on Tuesday to clinch a Semifinal berth.

But considering the Cardinals didn’t make it to Game 1 of the regular season two years ago, any disappointment was overshadowed by the massive steps forward the program has taken.

“This is about perspective,” Mooney coach Mike Lombard said. “Two years ago, we didn’t even have a varsity program. This year, we went to Allen Park Inter-City Baptist for a Regional Semifinal, were down 12 late and went on an 18-1 run to end the game. Everyone was upset (after the Regional Final loss), but there’s got to be perspective to say that the girls have come a long way.”

Mooney, which played in the Class D Final in 2009 and advanced to the Semifinals in 2008 and 2014, didn’t field a varsity team for the 2015-16 season because of a lack of players. With just seven, the vast majority underclassmen, the Cardinals opted to simply play a JV schedule.

“It was kind of crazy going from being coached by coach (Susan) Everhart, which was a really intense experience, to going backward,” said Lilly Wolf, who played varsity as a sophomore in 2014-15. “I think I kind of knew that eventually in my senior year there would be a varsity team, and it would be better for the program and myself to stick with it.”

It was a tough decision for a proud program, but it appears to have worked out. The Cardinals won the Detroit Catholic League Intersectional title in their first year back, and advanced to the District championship game before losing to Sterling Heights Parkway Christian.

Lombard gave a lot of the credit for that quick rebound to Wolf, who is now a freshman at Saginaw Valley State University.

“We were incredibly lucky that Lilly Wolf stayed with the program,” he said. “We played 22 games last year, and of those 22 games, Lilly would have been the best player on the floor in 17 of them. She bailed us out. We were able to have a little success because of Lilly Wolf, and to a lesser extent Lauren Luzynski and Molly Lombard. Those three girls really saved our bacon. They made basketball look attractive again.” 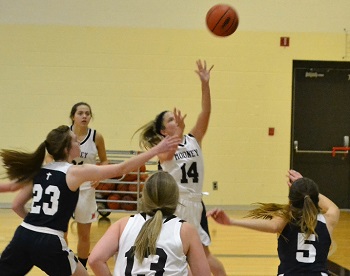 Mooney’s remaining players took advantage by getting to work in the offseason – not only on the court, but off it, recruiting their classmates to come out for the team.

“We tried to recruit those girls that we knew had played basketball in the past or that were just athletic,” Luzynski, a junior, said. “We just wanted to get people to come out for the team. We wanted to make Mooney great again.”

Building up numbers at a small Class D school was a major step for the program, and this season Mooney finished with 11 on the varsity team and eight on the JV, more than double the number of players in the program two years ago.

Mooney won another Catholic League Intersectional title this season, won a District title and finished 18-6. It was the type of season nobody saw coming two years ago.

“Yeah, it was definitely unexpected,” Luzynski said. “When I came in my freshman year, we barely even had a JV team. We barely had enough girls to have a basketball team. Making such a strong comeback in these last two years was very unexpected.”

There is certainly room still to grow, and the loss to Lakes showed that. It was also a call back to the past, when Mooney and Lakes would battle seemingly every postseason.

“There was some symbolism there, but also I think a dash of realism for the girls who are going to stay in the program,” Mike Lombard said. “That Lakes team puts in a lot of work as Lakes teams always do. Mooney teams have to do the same thing. So I think it was a look to the past, but also a look to the future to see where they want to be and where to get back to.”

Putting in the work should be nothing new for this group of Cardinals, and those who enter the program will have a good example to look to thanks to the teams from the past few years.

“I watched the girls play at Mooney when I was in eighth grade -- I was at their camp in seventh and eighth grade,” Molly Lombard said. “I knew how good they were, and I was hoping to bring that back to Mooney. I feel like we did bring that back to Mooney. We have a JV team now; we have a varsity. We have a new legacy going on at Mooney, and it’s great to be a part of it.”