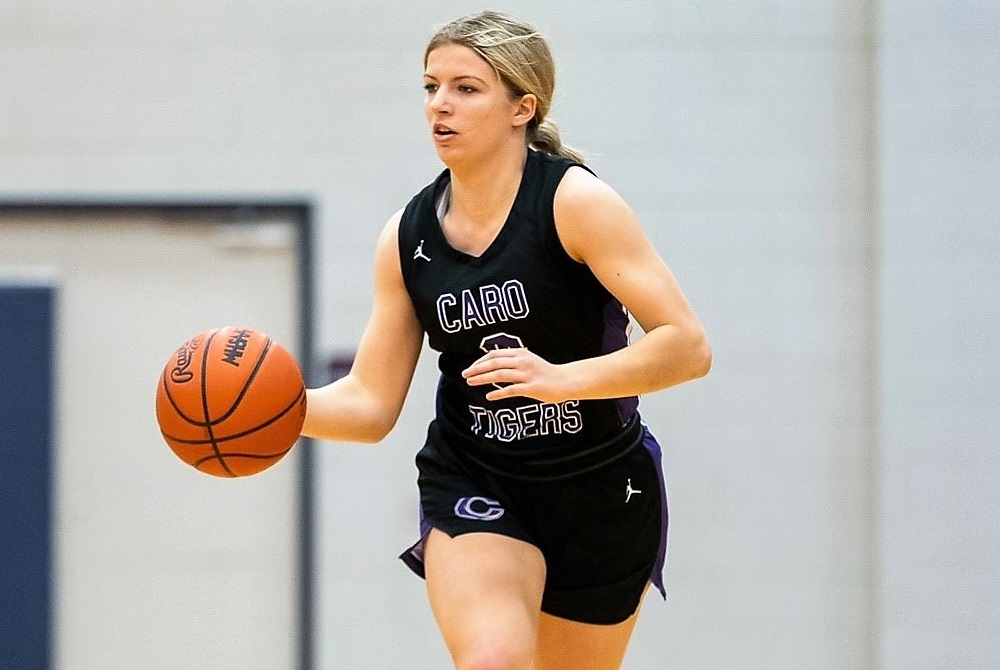 Adelyn Moore had done enough, even before the start of her senior year, to leave an indelible mark on the Caro girls basketball program.

But Moore isn’t satisfied now with simply winning games and rewriting the Tigers’ record books. She also wants to make sure girls who come through the program in the future have the chance to do the same thing.

“Definitely to build it up,” Moore said of her role in the program. “I know that it kind of sounds cliche, but I really like working with the little kids. This year, I’m coaching a sixth-grade girls travel team. … It’s so much fun.

“The program at Caro had never been a winning program, and I think this is me almost setting an example that it can happen at Caro. I love coaching the kids, and I can see the difference in them and how my class used to be. They want to win. They want to play sports, and play basketball.”

Moore is Caro’s all-time leading scorer, with 1,238 career points following the Tigers’ win Tuesday night against Memphis. She has nearly 750 career rebounds, which coach Jay Riley said is likely a school record, but hasn’t been tracked. If she can average 15 rebounds per game this season, she would certainly become the program’s first player to reach 1,000 points and 1,000 rebounds.

And that’s not that far-fetched. For her career, Moore has averaged 12.7 rebounds per game, including 14 per game as a sophomore.

She’s a three-time Thumb Player of the Year. She’s also been named first-team all-state in Division 3 by The Associated Press twice.

Most importantly for Moore, she’s been part of winning teams at Caro. Her freshman season, the Tigers were 18-3 and won the Greater Thumb Conference West – their first league title in 35 years. Both of the next two seasons were winning ones for the Tigers, and they’re 3-0 to start her senior year.

“Caro girls basketball had won 10 games twice in 20-some years, and she’s been part of teams that have done that in two of the last three,” Riley said. “The only other one was (the pandemic-shortened 2020-21 season). I’m confident we’re going to eclipse that this year, too. When she came in, we had a good senior group, but they all knew how special she was and that she was our best player, so they accepted different roles. She’s been part of one of the winningest stretches of Caro girls basketball in a long time.” 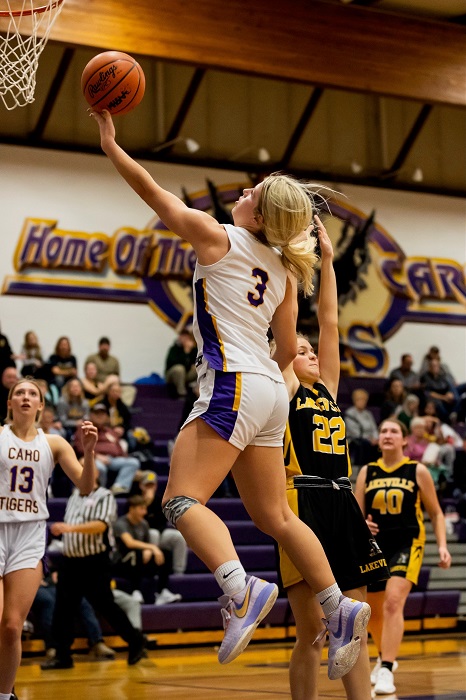 It’s winning that drives Moore the most. She said that she couldn’t fully celebrate breaking the school’s record for points, as it came in a loss against Kingston.

Thankfully, the school was able to bring in Lynette Coon, who had set the previous mark in the early 1980s, for the next game to present Moore with a commemorative basketball. That helped create a celebration, as did a win that night against Bad Axe.

“It felt really good to kind of feel like the hard work had paid off,” Moore said. “Then again, a better accomplishment for me would just be to get the win. It was super cool that (Coon) was there. She didn’t even know she had the record. That’s how not big women’s basketball was here. She only knew she had the record for like a week.”

Moore – a three-sport athlete who was also all-state in the shot put and discus as a junior – is committed to play next season at the University of Chicago. While she raved about the coaching staff, Moore was first attracted to the school because of its high academic standing. Moore is on track to be the valedictorian of Caro’s Class of 2023.

“It’s a very rigorous school, and I think that’s where I can get the best education,” Moore said. “Academics are huge for me. Right when I got there, the coaches were so cool. We really connected, and I fell in love with the program.”

Moore said she figures to play the 3 or 4 at Chicago, which she considers her natural positions. At 5-foot-9, she’s played everywhere for Caro, as Riley uses her to create mismatches whenever possible.

“She’s got the ball in her hands a lot – she’s primarily a guard,” Riley said. “If we get any mismatches, we’ll put her down in the post and let her take advantage. Not only can she shoot, but she has great post moves. She’s a mismatch nightmare for anybody.”

Riley said about half of Caro’s games a year ago featured opponents playing a box-and-1 defense to try and stop Moore. One team even played a triangle-and-2, with a pair of players constantly following her.

She still averaged 23.5 points per game to go along with 13.5 rebounds and 4.9 steals. She eclipsed 30 points in both of the Tigers’ first two games this season.

Moore thinks this year’s team can reach the heights her freshman team did, as many of them have been playing together since her sophomore season.

It’s a final chance for Moore to inspire the younger group of Caro girls basketball players with her play on the court, although she’s already done more than enough. Much like she has off it with her dedication to coaching a youth team, which includes multiple practices per week and Saturday games. She’s also a counselor at the Bayshore Basketball Camp during summer.

“She’s been a huge part of our success in turning this program around,” Riley said. “Which I think has sparked some of the younger girls to be more involved in basketball.”