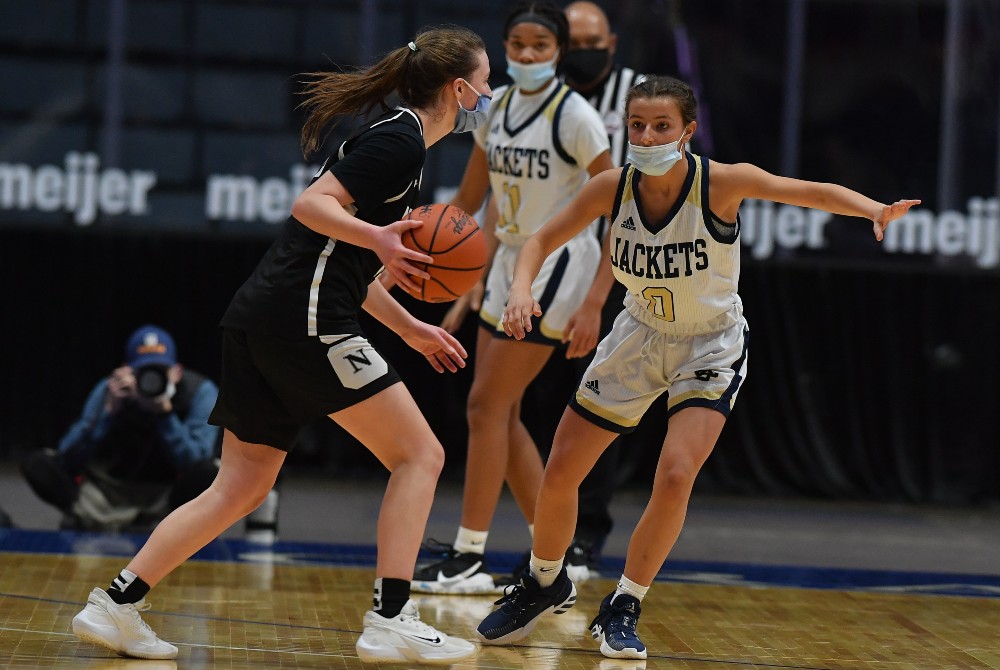 GRAND RAPIDS – To make a long story short, the Newaygo girls basketball team is headed to the MHSAA Finals for the first time in almost 40 years.

The Lions leaned on the Long sisters to earn their spot after pulling away in the fourth quarter to knock off Detroit Country Day 55-39 in Wednesday’s first Division 2 Semifinal at Van Andel Arena.

Senior Jaylee Long and junior Jaxi Long combined for 23 points, eight assists, seven steals and six rebounds to help lift Newaygo to the victory. The Lions were led by junior Emmerson Goodin, who had 15 points and nine rebounds.

“I love playing with my sister, especially because this is my last year, and so playing with her and going to the state championship game is pretty amazing,” said Jaylee Long, who recorded 11 points, five assists and four steals.

“I’m going to miss playing with her, and I will try to convince her to go to Cornerstone with me, but it is definitely going to be fun for our last game.” 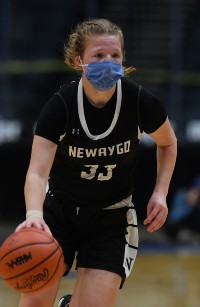 Jaylee Long said a majority of the players on the team have played together since third and fourth grade.

Newaygo hasn’t been to the Finals since 1985, when it won the second of back-to-back Class C championships.

“It’s really a cool experience, and it is really a once-in-a-lifetime thing,” said Jaxi Long, who added 12 points. “It’s not like you get to come here every year, and I really love this team. This is a great team, and we love to hang out with each other.”

Jaylee Long is one of three seniors along with Anna Brummel and Lily Ruehmeier, who both hit shots in the second half.

“This is definitely the way to go out,” Jaylee Long said. “I’m really happy about this opportunity since last year we weren’t able to finish. It’s been kind of crazy, but to see our community come out to support us has been pretty amazing. They love us and want us to do well, and hopefully we can finish it off and get it.”

The Lions needed a fourth-quarter surge to stave off the youthful Yellowjackets (15-3), whose roster was primarily made up of freshmen and sophomores.

Detroit Country Day scored the first four points of the fourth quarter to pull within one (39-38); however, Newaygo went on a 16-0 run and held the Yellowjackets scoreless for more than six minutes.

“It was just a championship moment,” Lions coach Nate Thomasma said. “Someone makes a run on you, and how are you going to respond? They responded, and they tightened up defensively and we hit some big shots.

“That’s what you have to do in this tournament, because there’s always highs and lows. You have to keep playing hard, and we got the job done. Hopefully we can do that one more game, and I’m just really proud of these girls.”

Detroit Country Day was unable to withstand the Lions’ run and struggled to score throughout the fourth quarter.

The Yellowjackets were 0 for 7 from 3-point range in the final quarter and a dismal 4-22 (18 percent) from beyond the arc for the game.

“They took us out of what we wanted to do,” first-year Country Day coach Jerica Williams said. “We are a three-point shooting team and we didn’t get off that many in the first half, and they took us out of our identity. They are a tough team top to bottom.”