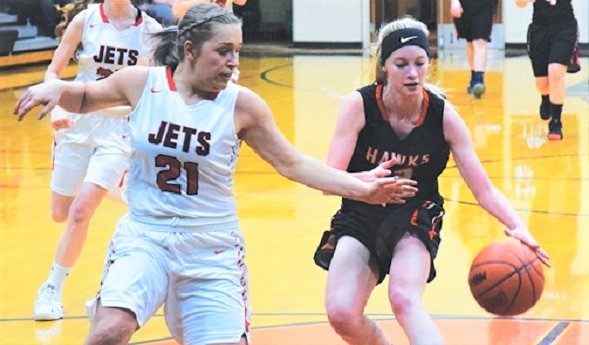 POWERS – A group of female athletes at North Central High School hopes to accomplish something no other girls basketball team at its school has done since 1980.

The Jets (16-6) took the first step toward their goal Monday night in a 65-25 victory over Republic-Michigamme (3-16) in a Division 4 District opener on their home floor.

"We just wanted to set the tone for the rest of the District," said sophomore Andie Arsenault, who averages nearly 13 points a game. "We wanted to gain some confidence. This is a very important step."

The Jets followed with a 54-42 triumph at Felch North Dickinson (9-12) Wednesday night, earning the right to host Stephenson (10-9) in tonight’s championship game.

"I was pretty excited to be playing our first District game at home," said senior Jadie Linder, who averages slightly more than 9.5 ppg. "I never played against (Republic-Michigamme) before. It was just business as usual. We weren't looking past anyone. We got off to a good start, which helped me relax. I'm usually super nervous at first."

North Central is shooting for its first District title in six years.

A victory tonight would send the Jets to next week's Regional tournament at Kingsford, knowing there's a strong possibility if they win that round that they could face top-ranked St. Ignace (22-0) in a Quarterfinal game at Marquette.

"Our goal is to win the Regional and get a shot at St. Ignace," said senior Chloe Wells, who averages 12.5 ppg. "It was real important for us to win the first District game. I think it shows other teams we mean business. Our press is pretty intense. It can get other teams frustrated and intimidated. We've all become more comfortable with our shot, and balanced scoring has helped. Everybody has shared in the success."

Junior Bree Arsenault, who averages nearly 11 points, said she enjoys the camaraderie she shares with her teammates. 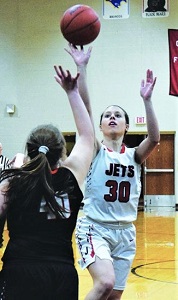 "We're all real close," she added. "It's easy to play well when you're surrounded by people you get along with. I think we're in a good mold. We're all ready to score and play defense. I think this just shows we're capable of getting things done. It's real exciting to go through this with people who are your best friends."

"Our team defense and being unselfish with the ball has been key," he said. "If someone's open, they're going to get the ball. Alex Neville has been playing tough, and Hailey Pavlat is coming on. We talk to the girls about taking one game at a time. Their attitude has been great. They all can score. Different girls have taken their turn being the leading scorer."

North Central, like other teams, has lost practice time due to the weather.

"I know all the schools are affected by it," said Vincent. "You get on a roll, then you lose a week. Kids tend to lay around when they're not in school. When they're in school, they're together going to class and talking about the game."

Among the team's highlights this winter was a 45-37 triumph at neighboring Bark River-Harris on Jan. 28.

The Jets also have learned some lessons along the way.

"When we beat them (BR-H) it really got us pumped up," said Wells. "After our loss at Carney-Nadeau (50-46 on Feb. 9) we learned we just have to play better defense and become more confident in our shot."

The Jets are well aware other factors also can come into play.

"We definitely have to stay out of foul trouble and stay healthy," said Vincent. "We want to peak at the right time."