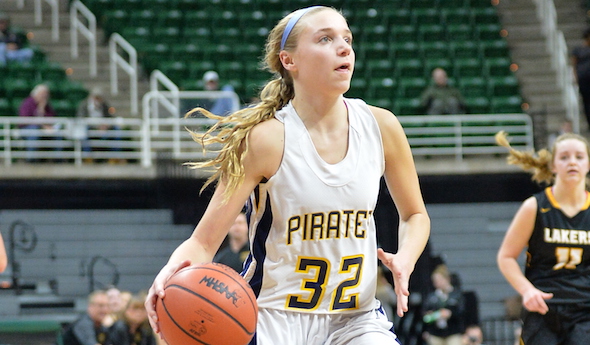 P-W can claim its third Finals title of 2016-17 on Saturday, thanks to the hoops team's 64-51 win over Maple City Glen Lake in Thursday’s second Class C Semifinal.

The Pirates girls can join the football and boys cross country teams as champions when they take on Detroit Edison Public School Academy in the 4 p.m. championship game. The Semifinal was P-W’s first since 2002, and the title game appearance will be the program’s first since finishing Class C runners-up in 1983 and 1984 – making it seem like all of this recent winning might be contagious.

“I think it’s just the community. Our community is so supportive, as you can see at any game and any championships – our community is there,” said P-W senior guard Brenna Wirth, herself a main cog on the school’s girls track & field Division 3 title winner in 2015. “I think we feed off that, and it keeps us going.

“I’ve been playing basketball for several years now, longer than I’ve been running, and basketball is really important to me and the community.”

How much it means to Wirth and her teammates came out especially over Thursday’s final 19 minutes.

Glen Lake (23-4) entered the regular season unranked but had already eliminated No. 2 Traverse City St. Francis and No. 7 St. Ignace before taking the floor against the No. 6 Pirates. The Lakers didn’t waste time going after another giant, taking as much as a nine-point lead into the final three minutes of the first half.

“Throughout the season, we tend to say the same thing over and over – you never win the game in the first four minutes,” P-W coach Steve Eklund said. “They were outhustling us; I’d say for the first 8 to 10 minutes they were outhustling us. Sometimes you have to adjust to your opponent. I think it took us a little time tonight to settle into the environment.”

“Obviously we had to fight back every little run they had,” junior forward Emily Spitzley added. “We just had in our minds to keep fighting. It’s just about confidence.” 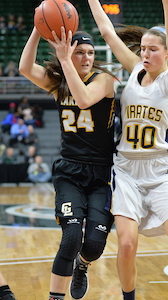 If the all-state second-teamer was lacking any, she found it as the comeback began.

Spitzley scored 20 of her game-high 24 points and grabbed eight of her 12 rebounds – and also blocked three shots – as the Pirates forced a 22-point swing.

Glen Lake got the advantage back twice with just under four minutes left in the third quarter, and after the Pirates rebuilt an eight-point lead got the deficit down to one again with 6:33 to play. But another P-W 8-0 run over the next three minutes finally put the game out of reach.

“We’ve had a lot of games where we had slow starts, but we’ve worked hard on coming out (strong) in the third quarter,” Glen Lake coach Jason Bradford said. “We just came out kinda slow on our heels and got away from what we usually do – pushing the ball, kicking it out. We were spinning our heels a little bit, and we got a little shell-shocked when the score started going the other way.”

P-W fans had about a 30-minute drive to fill their side of the Breslin stands Thursday, but Glen Lake had nearly as many fans – including three spectator bus loads – make a nearly four-hour trek.

“It’s just great to be able to put our name out there and show people all the hard work we’ve been putting in,” Carney said. “To just see the community come out and support us … it’s very rewarding to see the support we have.”