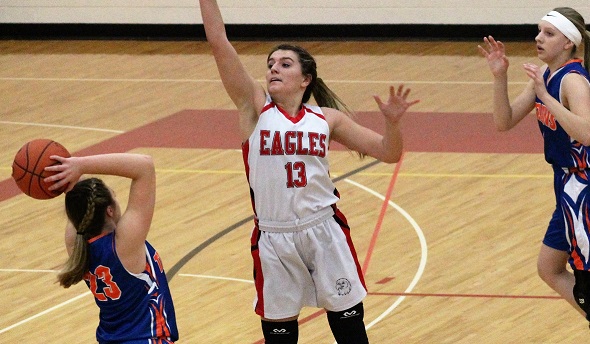 Bellaire’s 5-foot-8 forward added another memorable accomplishment to a high school career she expects to finish this spring with 11 varsity letters across three sports. Niepoth, a Class D all-state honorable mention a year ago, grabbed 27 rebounds to go with 24 points in a 54-21 win over Johannesburg-Lewiston on Friday to set a school record for rebounds and earn the Michigan Army National Guard “Performance of the Week.”

Niepoth is averaging 15 points, 14 rebounds (including six offensive), 3.8 steals and 2.2 assists per game, and her 27 rebounds made the MHSAA record book tying for 17th-most grabbed in one game. Niepoth is a four-year varsity basketball player, and this season’s team is 8-1 and ranked No. 2 in Class D by The Associated Press. Niepoth’s impact on both ends of the floor is obvious; she’s the best passer on the team to go with her scoring and rebounding, and she’s a “ball hawk” defensively able to guard every position while helping key the Eagles’ press. Niepoth also was a four-year varsity volleyball player and all-area selection as an outside hitter, and she’ll play her third year of varsity softball in the spring – she had to miss last season after injuring an ankle near the end of basketball season.

Her athletic successes go hand in hand with her classroom performance. Niepoth has a 3.945 grade-point average and is leaning toward studying psychology at Ferris State University after graduation. She has worked as a teacher aide in a special education class and would like to work with children in the future. She serves as a fine example to players coming up in Bellaire’s program, and she’ll be back on the court Friday against Pellston – before a matchup Wednesday against rival Gaylord St. Mary that likely will pit the first-place teams in the Ski Valley Conference.

Coach Brad Fischer said: “From day one she has made us a better team. Flat-out, she is a game changer, a tenacious player that never quits on a play. She can and often does dominate the game by her relentless effort rebounding and controlling the boards. The defensive pressure she puts on our opponents makes us go. … Her impact on the entire program may be immeasurable. For the past four seasons she has given her team, the program, and me as her coach the belief and confidence that no matter who we play we have the chance to win each contest. Not every program can say that, and I can without hesitation. Belief and confidence plays an important role in athletics, academics, and in life. With her that belief and confidence has made it throughout our entire program by her peers watching her and the constant positive examples we use of her for our younger players to emulate. That has made such a positive flow of influence from the high school level all the way down to our youth program. Lexi has been one of the main reasons for our recent success through her dominance, reliability and being a great teammate and role model on and off the court.”

Performance Point: “I don’t really think about it as I play. I just go for the ball. At halftime, my coaches kept telling me to rebound, and I could just tell; they were like, ‘You’re pretty close to the record.’ So I just kept rebounding and didn’t want to think about it a whole lot, so I didn’t freak out. When I was sitting on the bench, the JV coach that was sitting on the bench came to me and said, ‘You’re really close. Just keep playing, and keep rebounding.’ During the game, I don’t really think about how much I score or how much I rebound, so it’s rewarding – and it shocked me, to be honest.”

Own the boards: “My coach says sometimes in practice how I’m falling in love with just jumping for the ball instead of boxing out. But I feel like when they shoot it, I just assume it’s not going to go in, because obviously I like to rebound. But I also try to watch where the ball is going to bounce off the rim. I don’t really box out, to be honest. I just kinda run around the people – and then just jump as high as I can to try to get the ball.”

Finish strong: “We’re senior-based. I’ve been with Tally Goodwin all four years too, and I think her and I probably work the best just because we’ve had that experience. … Ever since freshman year, I never really thought senior year would come. I think it’s kinda cool: We were good freshman year. We were good sophomore year. We struggled junior year, and this year I feel like everything is clicking and the teamwork and team chemistry is probably one of the best I’ve had all my four years.”

Be the example: “I love the younger kids, and actually last year I was the coach and helped out with one of the youth programs. I just hope that I’m a good role model for them to become and do their best – (to teach them) the work ethic, or always trying your hardest even if you’re down by 15 or you’re up by 20, to try to still go after every ball, try to still make every lay-up, every shot. And also how you work with your teammates and how you work with the other teams, your sportsmanship and your attitude.”

On a mission to help kids: “I went to Belize on a mission trip with my youth group (over Christmas her freshman year), and it kind’ve all started there. You do things for them, say things to them. You teach them, and it sticks. It’s rewarding to see what you taught them and their growth.”

PHOTOS: (Top) Bellaire's Lexi Niepoth (13) blocks a passing lane during a game this season. (Middle) Niepoth makes a move to the basket. (Photos courtesy of the Bellaire girls basketball program.)