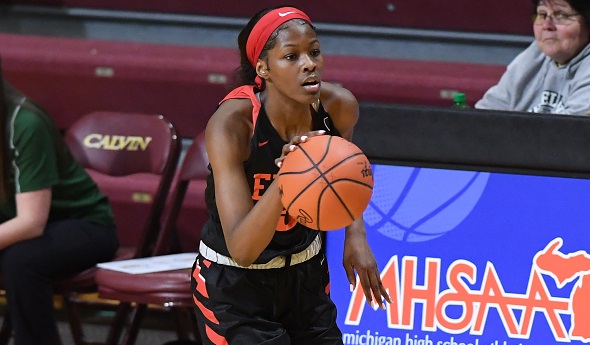 One of the most celebrated basketball careers in MHSAA history came to a close Saturday, as Jackson in her final high school game led Edison to a 77-58 win over Freeland at Van Noord Arena that clinched the Division 2 championship. The 6-foot-3 guard had 28 points, five rebounds, two assists and two steals in earning the Michigan Army National Guard “Performance of the Week.”

Jackson, who also had 26 points and eight rebounds in Friday’s Semifinal win over Haslett, previously had keyed the Pioneers’ runs to back-to-back Division 3 titles in 2017 and 2018. Edison became just the sixth school to win at least three straight MHSAA girls basketball championships. The Pioneers finished 27-1 this winter and went a combined 71-7 over the last three. Jackson leaves a massive legacy, with an interesting side note that she also was continuing a family hoops legacy – her mother Caryn (Shinn) Jackson starred for Detroit Murray-Wright during the early 1990s and played at University of Kansas.

Earlier in the week, Rickea Jackson was selected as the 38th Miss Basketball Award winner by the Basketball Coaches Association of Michigan. She finished this season averaging 22.4 points, eight rebounds, 2.2 assists, 1.9 steals and a blocked shot per game and averaged at least 21 points and eight rebounds per game all four seasons of high school. Jackson will play as one of 24 selections for the McDonald’s All-American Game and has signed to continue her career at Mississippi State University, which entered the NCAA Tournament ranked No. 4 nationally and has advanced to this weekend’s Sweet 16. She also excels academically, carrying a GPA above 3.0 into this school year according to her USA Basketball bio.

Coach Monique Brown said: “Just the competitiveness that she has – just pushing in practice, always getting everyone going – that’s the biggest attribute that she really gives us as far as preparing for games. She’s always pushing and pushing, talking and creating practice wars in practice. That makes games look a little easy for us because we’ve been working so hard in practice.”

Performance Point: “I believe my teammates and I have left a huge legacy,” Jackson said of the three-title run. “They’re letting me go off to college with three championships, and I can’t do nothing but thank them for that. It's bittersweet. I'm going to definitely, definitely miss high school, but time goes fast and now I'm going off to college." 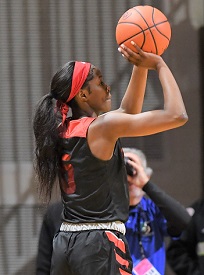 Every day against the best: “It started in practice with the major DI (college) prospects we have on our team, it just makes it easier when we go against these other (teams). We’re going against DI prospects every day in practice, and they’re pushing me and not letting up on me, so it definitely takes pressure off me in the game, because I do it in practice every day, so in a game it’s no different.”

All special, in different ways: “The first (championship) was definitely the one that was crazy for us, with all the doubters that we had, but we just fought through adversity and no one thought we could do it. So I would have to say our first championship was the one that really hit me. But this championship means a lot, too, because there was an even bigger target on our back and everyone knows who we are, everybody can see our games on the internet. This is probably one of the hardest ones.”

The next chapter: “My high school career is officially over, which is crazy to say. But I just can’t wait to get down there, show them what I can do and play on a big court.”