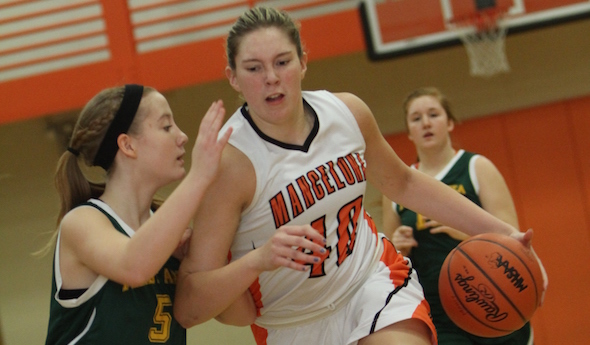 The 6-foot-3 center has had a monumental impact on the Ironmen girls basketball program over the last four seasons, and recently reached an individual milestone as part of that team-elevating effort. Naniseni scored her 1,000th point (and 32 in the game) during her team’s 54-40 win over Fife Lake Forest Area on Jan. 11 to earn the Michigan Army National Guard “Performance of the Week.”

Mancelona had lost 41 straight games before Naniseni took the court for the varsity for the first time and helped the Ironmen to a streak-breaking win in the 2013-14 season opener. Her team is 6-6 this winter, but Mancelona won only four games both last season and in 2014-15 and led during the fourth quarter of four of this winter’s losses. Naniseni is averaging 21.5 points, 13.9 rebounds and 5.6 blocked shots per game making 51 percent of her shots from the floor – she has five triple-doubles over the last four seasons including two this winter. She’s approaching the MHSAA record book list in rebounds with 878 over her career, and her 332 career blocked shots already rank 12th all-time.

Naniseni – whose first name is pronounced “I-lee-nay” in nods to her maternal great-grandmother Eileene and her father’s Tongan roots – became the third in school history and first since 1996 to reach 1,000 points. She made the all-Ski Vally Conference first team last season after making the second team both of her first two seasons, and she also has earned all-league honors in volleyball and will compete again this spring in track & field running the 400 and participating in discus and high jump. She’s also built a 3.98 grade-point average in earning a basketball scholarship to Lake Superior State University, serving as a basketball team captain for three seasons in addition to providing leadership as well as part of National Honors Society, student council, the school’s peer leaders group and SAFE (Substance Abuse Free Environment).

Coach Ben Tarbutton said: “Eileene has been a great leader and captain for this basketball program. E is one of those players that every coach wishes everyone could be like on a team. Not because of her scoring or rebounding ability, but her determination in building this program up from multiple one or two-win seasons. This is why she has earned the leadership and captain role of the team over the last three years. This year has been one of the most fun years to coach. What is different about this year is we are beating teams that we have not beat in 10 years, and four of our six losses we were leading at one point in the fourth quarter. The only way this is possible is because of the senior group of Eileene Naniseni, Caitlin Ancel, and Jill Smigielski. … Without these three and the leadership of E, our season would not be where it is today. E is a leader in both academics and athletics. She is an individual that exemplifies what a student, athlete, and leader should look like for younger students to follow.

Performance Point: “We don’t normally get a lot of spectators for our games,” Naniseni said. “But the first thing I remember was more people in the stands, more in the student section than I’d seen the past three or four years playing. All my family and friends were there to watch me; that was awesome. And my teammates were so unselfish with the ball – I think I had to get 31 points (to get to 1,000), and whenever they’d get the ball they were thinking ‘E’. I think because it was so close, we wanted to push and get it that night.”

Transformer: “When I first came into (Mancelona) freshman year – I moved to this school in eighth grade (from Central Lake) – I wasn’t aware of how the varsity had been doing, and I didn’t even understand how much that (streak) was until we won our first game. Now that we look back on it, these last couple of years we haven’t been super successful, but I notice right now, I know I’m making an impact. I see it at the younger ages. We do these camps every year … and when I started out there would be two eighth graders or five seventh graders, but this past year the seventh and eighth grade teams have 38 together, and the JV has 12 (players). I want people to get more excited about girls basketball. I want Mancelona to keep growing and progressing. My sophomore year we had six or seven on the varsity team, so it was hard; this year we have nine girls, so that’s the most interest I’ve ever seen and it makes me excited.”

More to accomplish: “We wanted to win more games than in the past, and we’ve already achieved that. We recently beat Onaway and Joburg (Johannesburg-Lewiston), which we hadn’t beaten in 12-15 years. We want to beat them again and beat teams that we’ve been underdogs to for years and that no one expects us to beat. I can tell (from opponents) when we’re warming up that because they’re playing Mancelona, they think it’s going to be an easy win. But I want them to be surprised … because they always underestimate us.” 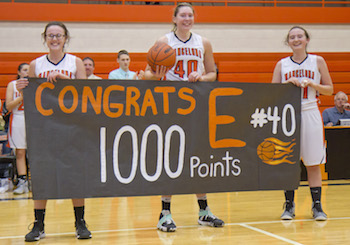 Born to lead: “When I was a freshman, I had a really good art teacher who really was into leadership stuff, and the athletic director then let me go to a lot of leadership programs. Those definitely helped shape my leadership qualities and opened my eyes to what a leader should be, and I took a lot of notes. I try to be trustworthy and always try to work hard too – the captain of the team is expected to work hard – and if someone has questions they need to ask or if they need to confide in you, you can listen, but be strong too; you can’t be a pushover. When I was younger, I guess my confidence level, I didn’t realize how much that played a role in being a leader. … I want to build confidence in my teammates to show them that they are good players.”

Dr. Naniseni: “I would like to be a pediatric oncologist, or really anything in pediatrics because I love children. I think I’ll go into biology when I get up to Lake State; I’ve thought about being a teacher, but my family always has been medical-related, and the medical field fascinates me. I like how if (people) are hurting, you can give them something and make them better. That blows my mind sometimes.”

PHOTOS: (Top) Eileene Naniseni, dribbling, works to get past a defender. (Middle) Naniseni, middle, holds up with teammates a banner celebrating her 1,000th point after reaching the milestone Jan. 11 against Fife Lake Forest Area. (Photos by Joanie Moore/JoanieMoore.com.)