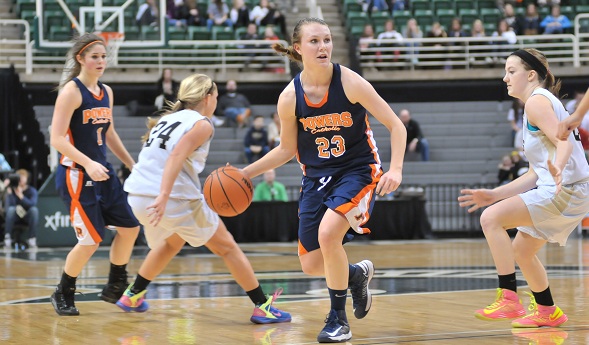 EAST LANSING – There was a time, not long ago, when Flint Powers Catholic was expected to show up at the MHSAA Girls Basketball Finals just about every season.

And there’s been an expectation these last few years that the Chargers would soon return.

They needed overtime, but made good on that Friday by defeating Midland Bullock Creek 48-45 to advance to their first Class B championship game since 2001.

And it’s a run made all the more incredible given Powers’ 3-5 start this season, their Regional Semifinal upset of No. 1 Freeland – and that they came into this winter after posting an 8-13 record a year ago.

“We sort of had a weak start from the Ladywood game (on opening night), and from there we just started picking it up and playing as a team,” Powers senior Darbie Barkman said. “’We believe’ is a huge saying for us, and we just keep going and playing strong. No matter how many points we’re down; in the Freeland game we were down 16 points and came back from that. We just had to keep believing and keep going, and we just always have to push through as a team.”

Powers (21-6) will face either reigning champion Goodrich or Grand Rapids South Christian at 6 p.m. Saturday. Powers and Goodrich played in the same District last season, but found themselves on the opposite side of the bracket when lines were drawn for this season.

The Chargers are owners of four MHSAA girls basketball titles. And along with those banners, a message is posted in Powers’ gym, “We believe,” which became a necessary motto during the rough start against a tough slate including Class A Semifinalist Westland John Glenn.

Powers coach Thom Staudacher said the schedule was built so his team would know what it needed to improve on for the rest of the season. The Chargers now have won 12 straight.

But like in other wins during this run, it took a lot of small contributions from a number of players – and some big and small both from junior forward Michela Coury.

She scored, was fouled, and made the free throw to open overtime and give Powers a lead it would never relinquish. Coury finished with 14 points and 16 rebounds – including six on the offensive end.

But she also forced a travel during the final minute of the fourth quarter that helped preserve the regulation tie, and grabbed one of those offensive rebounds to ice the game after Powers missed two free throws with five seconds to go on overtime.

“We just knew it was going to come down to the last minute as far as who was going to make that last shot,” Staudacher said. “We’d been trying to feed (Coury) down low all game, but it was difficult to get her down there.

“To start that overtime, that three-point play was huge. That wasn’t the intention. We do a dribble drive, and we were working it right there. She was open, and we’ve got to feed her the ball." 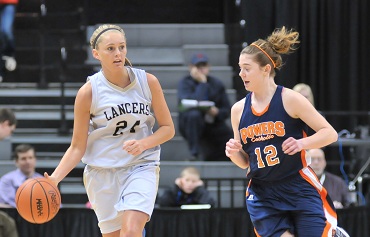 Sophomore Halee Nieman led Bullock Creek with 15 points, 11 rebounds and four steals, while freshman forward Alyssa Mudd had 12 points and sophomore guard Hannah Heldt had nine, five assists and six steals. But the Lancers (23-4) fired only four shots during the overtime, and made only one.

Still, as coach Justin Freeland said after, most of the time when a team is outrebounded 47-28 it should mean a double-digit loss. Instead, Bullock Creek hung on through 11 lead changes and despite 17 Powers second-chance points.

“One thing we learned as a team is to not give up,” Heldt said. “In the Clare game (Quarterfinal), we were down 15, and probably a lot of people lost hope in us. But we just kept going.”

Bullock Creek has had other strong teams under Freeland, including a 23-1 finisher in 2006 and a 24-1 squad in 2007-08. But neither of those advanced out of the Regional.

This team entered the tournament unranked, but beat No. 2 Ludington at the Regional and fell just shy of its first championship game berth. Only three seniors graduate, and four starters should return.