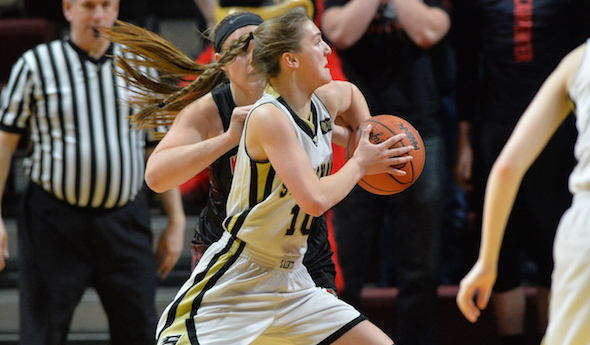 But it doesn’t take long to tell how much she’s enjoyed guiding this one.

There are plenty of reasons why – these Saints are selfless. They’re one of the hardest-working teams she’s coached. And they are just plain nice.

And like St. Ignace teams of the long and recent past, they know how to close out wins – and showed how again in holding on against senior-dominated Kingston 48-44 in Thursday’s first Division 4 Semifinal.

“We wanted it really bad,” Saints sophomore guard Hallie Marshall said. “We wanted it for our seniors, and our team – it’s a special group this year.”

It’s also the first with a chance to finish 28-0 – only 18 teams have achieved that record – and the Saints will get that chance against either Adrian Lenawee Christian or Fowler in Saturday’s 10 a.m. championship game.

St. Ignace has won five Finals titles under Ingalls, including back-to-back to end her first two seasons running the show. The 2013 team finished 27-0 with only two District games on its tournament path.

It took a classic effort to earn this opportunity against a Kingston team also enjoying a historic run.

These Cardinals were the first in school hoops history, girls or boys, to reach the Semifinals. And led by an all-senior starting lineup, they didn’t show any intimidation taking on an annual state power with more history on the line. 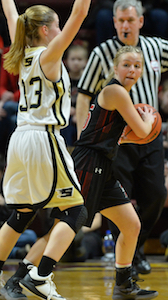 The Saints got the lead up to seven multiple times during the first half, but Kingston got the margin back to four by the break. St. Ignace led by as many as 12, at 3:19 to play in the third quarter, but the Cardinals got within two twice during the final two minutes. Marshall had a three-point play – basket and free throw – the first time, and freshman guard Ally Schultz hit two free throws the second to establish the final margin.

“When you’ve got seniors playing basketball as long as they have, they trust in each other,” Kingston coach Jay Green said. “What makes this team special is their teamwork.

“These guys work well together and know how to accentuate each other’s positives and make up for if they are lacking stuff in their game. I’m not surprised at all they came out with the confidence they had. These girls are special and proved it today – and we’re almost there.”

Senior Emily Coveyou scored a game-high 20 points and grabbed eight rebounds for the Saints. Marshall had 14 points as one of only two players to make more than 50 percent of her shots from the floor.

Coveyou is battling through exertional compartment syndrome, an exercise-induced muscle and nerve condition that causes pain, swelling and sometimes disability as described by the Mayo Clinic. But averaging a team-high 22.9 ppg entering the week, she has St. Ignace on the verge of what would be its fourth title this decade and first since 2015.

“We had six players make over 15,000 shots before the season started and Coveyou is probably closer to 20,000,” said Ingalls, at the postgame press conference with her leading scorer. “Coveyou is playing at sub-70 percent. She’s just a warrior. It’s progressively getting worse every week we go.

“But we have only one more game sweetheart. I’m proud of you – you’ve willed your way.”