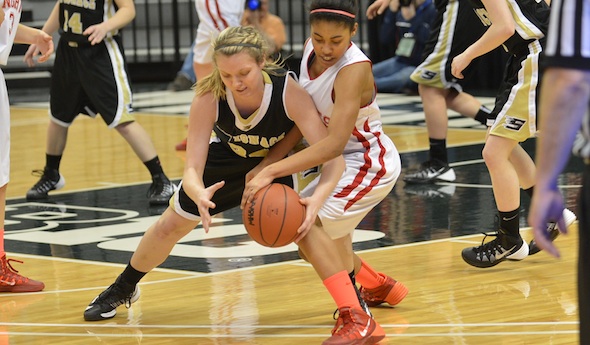 This had to be one of the ugliest – but could end up one of the most meaningful as well.

Wright and the Saints earned an opportunity to play for a second-straight MHSAA championship and third in her four season with a 34-30 Semifinal win over Grosse Pointe Woods University Liggett.

“All I know is I’ve lost four times. I never really thought about all the times I’ve won,” Wright said. “I play for a really good team, and I can’t take credit for that just because I moved up freshman year. All of us deserve it, and fortunately we’re all getting the benefits from it.”

Wright said after she expects to “feel sick and little nervous” before her team takes on Saginaw Nouvel in Saturday’s 4 p.m. Final.

Saints coach Dorene Ingalls joked about firing husband Doug as the team’s shooting coach after a performance that left both teams at least in some disbelief, if not feeling a little ill as well.

St. Ignace made a meager 19 percent of its shots from the floor. Liggett connected on 25 percent. Still, the Saints led by seven heading into the fourth quarter – but Liggett tied the score at 30-30 with 2:36 to play.

The Knights (20-4) had an opportunity to go ahead before St. Ignace senior Emily Hinsman gave the Saints back the lead with a put back with 1:37 to play. The teams then traded misses and turnovers as Hinsman stepped in to intercept a pass into the paint with 39 seconds. Junior guard Margo Brown made two free throws seconds later to push the lead to its final margin of four.

“It was frustrating at first. They’d just trap you as soon as you got the ball in your hands,” said Liggett junior Lauren Ristovski, who led the team with nine points. “They’d just jump out and trap you, making you throw the ball away.”

It’s not the kind of game Wright has been part of winning too often during the last four seasons and especially during this current 18-win streak. But the Saints made it go in part with 59-36 rebounding advantage, which included grabbing 28 on the offensive side. The Saints also had only 12 turnovers to Liggett’s 18.

“Once we got back in January, our practices when we came back were intense. Just a different level,” Dorene Ingalls said. “Our team took over a different identity at that moment. Kelley and I were on the side, and (I told her) this is going to be really good.

“I’m glad we got an opportunity to show on Saturday that we’re better than we showed tonight. But you’ve got to give Liggett a lot of credit for that.”

St. Ignace also got a helpful and inspiring bucket late from junior Autumn Orm; she had four points total, despite being restricted to only 30-second spurts of playing time because of a neurological disorder that won’t allow her to be active for longer, Ingalls said. “She was getting deflections, getting rebounds. That was our inspiration. That’s why we won,” Ingalls added.

The Knights nearly pulled off the comeback despite all five starters playing all 32 minutes. The team’s rotation got down to that minimum in part because Liggett lost junior forward Haley Neuenfeldt to a knee injury in the final regular-season game.

But three of this season’s starters also started on the 2012 team that finished Class C runner-up. And they helped the Knights improve on last season’s run, which ended during the Regional.

“I expected for us to play hard enough to get through the District and do better than last year. That’s what we preached,” Liggett coach Omar Ahart said. “Once we got to the Regional Final, and got through that one, (I thought) someone has to win state. Why not us?”

Click for a complete box score and video from the press conference.