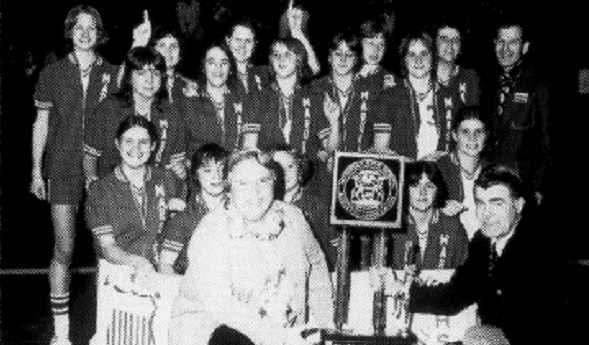 The following tells the story of the 1976 Marquette girls basketball team, still the only Upper Peninsula team to win an MHSAA Class A girls basketball championship. This piece, by MHSAA historian Ron Pesch, served as the story behind the ceremony from a “Legends of the Games” program celebrating the Redettes.

If you never have dreams, they can never come true.

For coach Barb Crill and the girls basketball team from Marquette, the dream was to win an MHSAA basketball crown.

“Barb said to us as incoming freshmen that we would win the state,” said Karen Levandoski Helmila, recalling her days as a Redette.

In 1974, Grand Rapids Christian eliminated the Redettes in the Regional Final. In 1975, the team averaged 68 points a game to 25.9 for the opponents. In the MHSAA District Final, Marquette downed Sault Ste. Marie, 109-16, then brushed aside Portage Central, 72-18, in the Class A Quarterfinals. However, the voyage ended abruptly in the Semifinals with a loss to Farmington Our Lady of Mercy, 62-57.

The nucleus was in place for another run at the title in the fall of 1976. The team had lost all-U.P. players Jean Moratti and Laurie Niles, but had strong replacements. The Levandoski twins, Karen and Kay, Cheryl Aho, Janet Hopkins, Sue Belanger and Caron Krueger were all seniors, and Katie Miller, a senior transfer from Eau Claire, Wis., had joined the team. Forward Shelly Chapman, a junior, also had won all-U.P. honors. Sophomores Cynde Cory and Chris Moran were expected to be the first off the bench. Sue Micklow, Kate Jennings, Lisa Coombs, Mary Erspamer, Cathy Niles and Sue Lakanen rounded out the squad. Karen Meyers, the leading scorer on Northern Michigan University's basketball team and former Redette, was returning for her fifth year as Crill's assistant.

But time was running out for the squad to achieve their coach's prophecy.

“Over the years we had played every good team in the U.P.,” said Crill. “The girls needed more.”

So on Labor Day weekend, 1976, the Redettes prepared for a trip to Detroit – their coach's old stomping grounds. Crill had arranged scrimmages against some old friends in the Motor City; among them Detroit Dominican, coached by Sue Kruszewski and winner of the Class A title in 1973 and 1974, and Harper Woods Bishop Gallagher, which had made it to the Quarterfinals in 1973.

The Marquette squad responded to the challenge, playing well in the workouts.

“The girls came back in shape from summer vacation,” Crill told the media after the trip. “Most had done a lot of work on their own, while others stayed active playing other sports.”

A native of Allen Park, Crill had started coaching and teaching in Ann Arbor Public Schools in 1959. She instituted Marquette's girls program during the 1969-70 season. “We started here before there was any MHSAA (sanctioned) ball,” said Crill. “The girls provided their own uniforms. The principal, Paul Kotila, provided a bus and driver. We played everyone with a team. It promoted a lot of the interest.”

Through 17 additional regular-season games, the result was the same. Omitting a 2-0 forfeit by Harbor Springs, the Redettes improved their average from 1975 to 80.8 points per contest, while decreasing their opponents’ average to 25.2 per game.

The squad dumped Escanaba, 71-29, before a crowd of about 100 for the District title at Escanaba. Shelly Chapman led the team with a season-high 33 points. In Grand Rapids for the Regionals, the Big Red Machine defeat Benton Harbor, 64-55. Leading at the half by 25 points, Crill went to the bench. Again, Chapman led all scorers with 21 points, while Krueger added 16 and Hopkins added 13.

In the Regional Final, the Redettes faced a taller Grand Rapids Union squad. Despite the partisan Union crowd and a slim three-point lead at the end of the third quarter, Marquette pulled away for a 48-34 win.

With another victory in the bag, the Redettes congratulated one another in a familiar postgame scene during the 1976 championship run. True to her words, Crill and her Marquette cagers would have a season to remember and scrapbooks to compile following their impressive run to the MHSAA title. In the Quarterfinals, the team defeated Lansing Eastern, 67-37, then disposed of Flushing, 62-46, in the Semifinals. All that remained was a rematch with Farmington Our Lady of Mercy.

This time Marquette would not be denied, downing the reigning champs, 68-41. Chapman finished with 23, Hopkins poured in 19, and Krueger hit for 14 as Crill's starting five went the entire game without a substitution.

“I was impressed with the ladies’ positive attitude as we prepared for the championship game,” said Crill, reflecting on the matchup. “They seemed quiet, very determined, very patient with one another and quite business like. I had coached many games by the fall of 1976, but I never remember another game where we planned together what to do to win, and they followed our plan perfectly.”

The team was the first Class A school from Michigan's Upper Peninsula to win an MHSAA basketball championship, a feat that has not been repeated since.

“The strength that our team held through the entire game was so strong,” said Aho Reynolds. “That's the way I felt. The more baskets we made the more we wanted. The offense and defense combined everything that night.”

“The crowd was so large for the Final game,” recalled Levandoski Helmila. “There were thousands of people watching and it seemed like only 50 cheering for us. We were glad to face the team that knocked us out of the tournament the year before. We worked together for so long to reach our goal.”

“We wanted that victory not only for the members of the team, but for our coaches, parents and community,” echoed Levandoski Angeli. “We were not only a team, but a family. Our coaches made it clear and instilled in us that no individual was a star alone.”

“Wow! It was fun,” said Hopkins, “a great ending to four years of high school basketball. We dominated the game. We were the underdog, yet we were confident and played to our strengths. Each year I played, the team improved its skill level. In my senior year everything came together and we were unstoppable! Each team member contributed to the outcome, whether it was during practice, or a game. We were focused and determined to succeed.”

“Cheryl Aho's incredible defense stands out in my mind,” remembered Coombs Gerou. “She stopped one of the leading scorers in the state. Our team defense really stood out. “Everyone played, and on any given night someone off the bench would score as much as someone who started. We all treated each other with respect and worked together as a team. Coach Crill taught me that anything was possible if you worked and prepared for it.

“Another memory was our singing on the bus, even those of us who couldn't carry a tune.”

It was one of the longer bus rides that set the foundation for that championship year.

“I think that trip (to Detroit) was the biggest difference,” said Crill. “It gave them more experience playing the type of teams they would meet in the tournament. They could see they were talented enough. They had already played the best there was. They realized they could beat them again.”