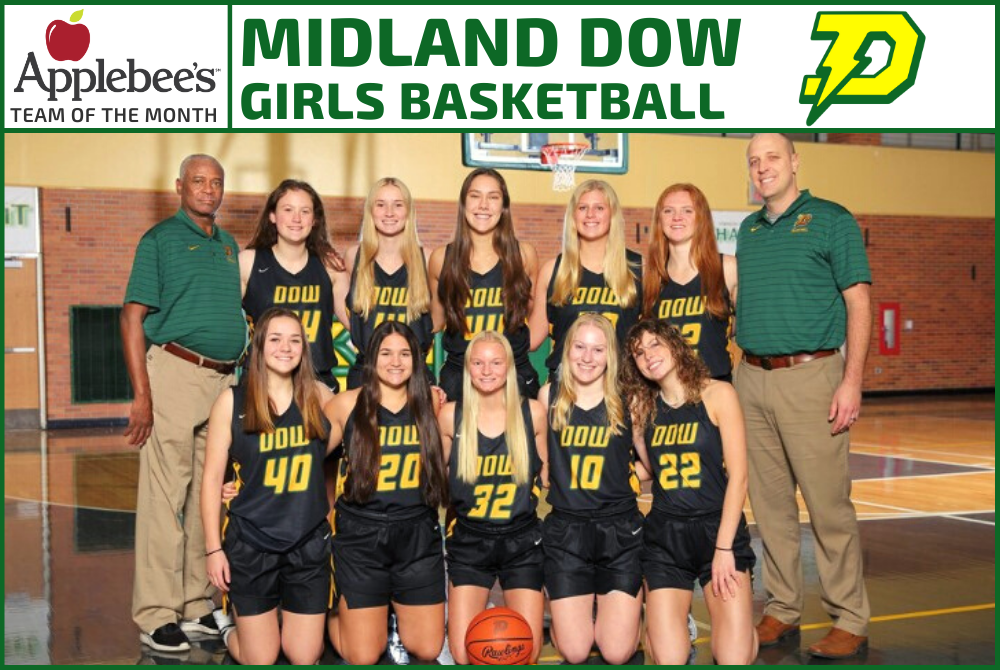 Coming off an undefeated regular season and trip to the Division 1 Semifinals, it might seem strange to consider Midland Dow’s fast start this girls basketball season . The Chargers never stopped the steam-rolling that carried them to the Breslin Center last April.

But the start of this winter certainly has been different for Dow – the MHSAA/Applebee’s “Team of the Month” for December – and in a way that could pay off big again this March.

Because of COVID-19 precautions, teams weren’t allowed to play their first games last season until Feb. 8, and Dow ended up with 13 of their 17 games against Saginaw Valley League opponents as teams emphasized their league schedules during the abbreviated season.

A return to a full schedule for 2021-22 has allowed the Chargers to make a trip west to face reigning Division 1 champion Hudsonville, bookended by appearances in the Ice Breaker Classic at Ypsilanti Arbor Prep (against Goodrich) and Best of Michigan Holiday Classic at Belleville (against Grass Lake) – events that annually feature many of the state’s elite teams.

They made the most of those renewed opportunities, having handed Hudsonville and Goodrich their only losses and also defeating Grass Lake – the reigning Division 3 champ. Dow is 8-0, and that’s even more impressive considering the Chargers’ first five opponents this season all have winning records and are a combined 27-13.

“We talked about it before the season started, that we had scheduled a pretty hard December on purpose,” Dow coach Kyle Theisen said. “Pretty much every game was on the road – we’ve only had three home games so far – and all of our tough games are road games.

“That was kinda our focus, getting battle-tested early and figuring out where our weaknesses might be. We definitely found the weaknesses, but we were able to do it with wins.”

Those against Hudsonville and Grass Lake, predictably, were close – Dow defeated the Eagles 56-51 and the Warriors 44-40. No other opponent has gotten within single digits of catching the Chargers.

Dow’s 2020-21 season ended with a 22-1 record and its only loss in the Division 1 Semifinals to Hudsonville, 49-37. So doing the math, the Chargers are a combined 30-1 over the last two seasons, and 51-4 over the last three. Total, Theisen has led the team to a 151-22 records now into his eighth season as varsity coach, with this winter’s success following a similar pattern that has made his team one of the state’s best over his tenure.

Long-range shooting is Dow’s name of the game. Ellie Taylor drained 242 3-pointers – ranking eighth in Michigan history – during her four-year varsity career ending in 2017. Molly Davis also is on that record book list having made 174 from 2016-19. Maizie Taylor – Ellie’s younger sister – is on the single-season 3-pointers list after connecting on 65 as a senior in 2018-19. Jada Garner was among the team’s sharpest shooters and its leading scorer last season, and like those three has moved on to play in college. Leading the way this season are seniors Abby Rey and Alexa Kolnitys, who both are averaging 19.8 points per game with plenty of sting from the arc – Rey has made 23 3-pointers at a 39-percent success rate, and Kolnitys has 21 connecting on 35 percent of her attempts.

As a team, Dow averages 8.5 3-pointers per game on 30-percent shooting success. The Chargers’ 66 points scored per game are among the best outputs of the Theisen era, and the team’s 17 3-pointers in Tuesday’s win over Lapeer were a school record and tied for sixth-most in state history made by one team in a single game.

The team doesn’t work much in practices on set plays, but spends an hour or more daily on shooting. Future Chargers learn early. Theisen and his former assistant (and former college coach) Bob Taylor (also Ellie and Maizie’s father) created TRUE Shooting camps about five years ago, and their sessions draw students as young as kindergarteners who “get to high school having a pretty good foundation of shooting.”