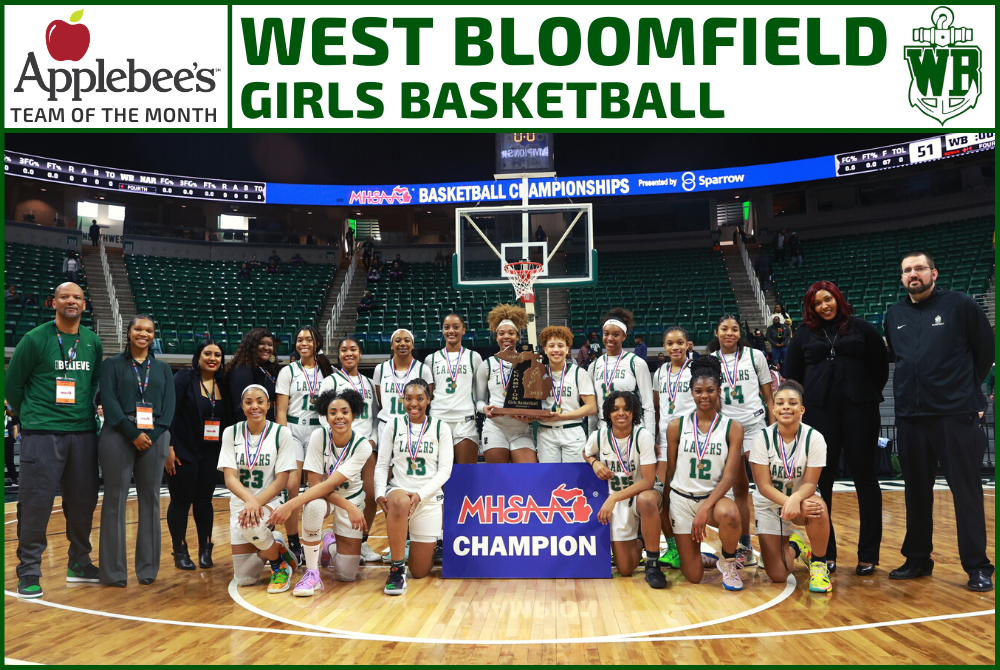 One of the compelling moments of this season’s Girls Basketball Finals at Michigan State’s Breslin Center came just after the final buzzer of the Division 1 championship game.

As his players rushed each other to celebrate midcourt, West Bloomfield coach Darrin McAllister first leaned forward, hands just above his knees, before moving down into a crouch, head dipped to his chest, obviously breaking down a bit in joy at what his Lakers had just completed.

McCallister had played college football and helped Wayne State’s women’s basketball program to multiple NCAA Sweet 16 appearances as an assistant coach. But what the Lakers did last month – finish reeling off 25 straight wins with their first MHSAA Finals girls basketball championship – made his “Mount Rushmore,” if not much more.

It was not as easy as the Lakers – the MHSAA/Applebee’s “Team of the Month” for March – frequently made it appear.

Yes, West Bloomfield’s players said on their first day of practice Nov. 12 that they planned on winning the Division 1 championship. And that seemed like a logical goal for a team that eventually will send at least four players to Division I college programs and had won a league title and finished 10-3 during the COVID-interrupted 2020-21 season.

But the Lakers also entered the preseason having graduated five players from that team and with a young but talented lineup needing to learn how to be cohesive and efficient in their roles. Add in that McAllister got a late start, taking over the program after all of the summer training and majority of preseason prep were done.

West Bloomfield lost its season opener 59-46 to Dexter (which would go on to finish 19-3). But a week later, the Lakers started to show what they could do in coming back from a 19-point deficit to defeat Illinois power Bolingbrook 48-47.

Just before the midpoint of the regular season, McAllister could see things taking shape.

“We had talented players, but they were young. So we kinda started it all over and identified our identity,” he said. “Every had to establish their roles and buy into their roles, so it wasn’t easy. I think for me, it makes me more appreciative and makes me enjoy this experience more than anything else.”

Along the way, West Bloomfield repeated as Oakland Activities Association Red champion. Two weeks before the start of the playoffs, the Lakers also accomplished what for a few seasons had seemed unthinkable to most – hand Detroit Edison a 65-62 loss, the Pioneers’ first to an in-state opponent since 2017-18 and after Edison had defeated West Bloomfield by nine and 28 points the season before.

Perhaps the least surprised were the Lakers, who had started believing they could defeat Edison after the Bolingbrook win. They also believed they could compete with every other team as well – and they would continue impressing with a championship run that included wins over Bloomfield Hills Marian (15-7), Farmington Hills Mercy (18-5), Grosse Pointe North (18-6), Troy (13-12), Rockford (23-3) in the Semifinal and Hartland (25-2) in the championship game.

The pair of wins at Breslin showed what West Bloomfield has transformed into this winter. In defeating the Rams 66-63, the Lakers received double-digit scoring from four players – led by sophomore twins Indya Davis with 24 points and Summer Davis with 16 and six assists – with junior Sydney Hendrix posting a double-double of 10 points and 10 rebounds and guard Myonna Hooper setting the high-energy tone along with scoring 14 points. At the same time, senior center Zaneiya Batiste didn’t score and shot only twice – but grabbed nine rebounds, nearly the difference in the Lakers’ rebounding edge.

“March was the month everything came together,” McAllister said. “At the end of the (championship) game, I shed tears because it was emotional seeing it come together.”

West Bloomfield felt like it was just trying to catch up much of the season due to McAllister’s taking over late. But now, with five of this season’s top seven players coming back next year, it also feels like the Lakers are just getting started.

“Now I’m excited and looking forward to our offseason,” McCallister said. “I can’t wait to get the players in June and start getting workouts in and going to team camps, because I know that’s only going to make us better for the upcoming season.”